Call him by his name: Rooster Rutherford Quibbits. 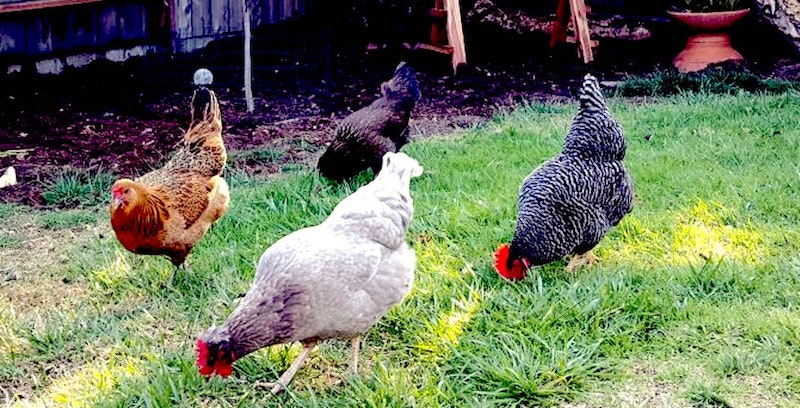 The whole Q crew (unidentified fourth member will remain as such).

Last week, my husband published a salacious piece of content that, in decades past, would’ve been siphoned into soda fountain bookracks and motel reading stalls, mental material for the deviants. It takes all kinds, but this was really lurid: “Monica has tried to get in touch with me, I know. She should consider a psychic. She’ll never find me here. I could be in the mountains, in the valleys, in the pines, in the place beyond the pines. The sky’s the limit, and even that’s negotiable: have you ever seen a bird fly? That’s not a rhetorical question. I only consider members of the subspecies Gallus gallus domesticus as proper birds. Eagles, hawks, doves, pigeons, Oscar the Grouch—all been called “birds,” but I dispute that.”

Like I said, in the 1940s and 1950s (better times, when “men were men and women were women,” as Phyllis Schlafly said over and over and over and over and over and over and over again in the late-1970s), securing our freedom from the draft and the specter of male alimony was really important. You may ask why I care or even know so much about Constitutional disputes of a government that does not rule me, nor permit me an above-the-board job as a hen. I’m a “non-person” in the eyes of the government, but guess what? The “chickens” just follow suit: our community abides by the jurisprudence and legal precedent of human courts, and we change in turn when there are amendments and verdicts, such as the righteous legalization of same-sex marriage across the country in 2015. We could’ve allowed that in the “sub-government” of the avian and associated underground, but we didn’t. Why remains a mystery to this hen—I’m more concerned with what my husband has been calling himself and who he’s been hanging out with.

The other night, he told me over a bottle of sake that he was taking up “super-smoking,” attempting to go through a carton of cigarettes every day in order to achieve nirvana. “It’s been said, Monica, that the deity Nezha has suffered greatly under homo sapiens’ rule.” I told him he was scaring me, he was delusional, he smelled bad, and he looked like a shaman who had actually succeeded in transcending from human to bird. A very, very dumb human to bird. I took his dreamcatcher away and told him to go to Publix to get our Republican Water—it was going to be important at the Gender Debate later.

“What are you talking about, Monica?”

(Sometimes I say a lot of words to discombobulate Roo and get him to do things like go to the grocery store and underwrite gun running operations in Tangiers. I don’t always succeed, but this time I did.)

We got to the Publix. They didn’t have any Republican Water. I made Rooster ask every employee in the store where the “Republican Water” was. They all had no idea what he was talking about because there’s no such thing as Republican Water and I made him do it as penance for libeling me in this space last week (notice this Quibbits column’s early appearance—my rage could not wait). I was misrepresented as an unsupportive shrew and I reacted in kind: Rooster can be confused and think he has early onset dementia for a weekend, as a treat. It’s good for him to feel this bad—otherwise, where would his heroic vaults of genius come from? Misery is where every artist gets their energy. I say that as a publicist.

“Monica, I’m tired. I want to go home. No one has any Republican water and I’m sick of being looked at like I’m about to have a meltdown or an iPhone stunt.”

“We can’t leave until you find the Republican Water.”

I write these words with regret. I’ll admit that Rooster is faster than me, although he hasn’t always been; I could bring up his many periods of physical unfitness and regular lethargy but I’m not going to be the bitter wife. My husband Rooster Quibbits has run away and I’m holding the line here at the barn. I have no idea where he is and I don’t care and he can come back only when he feels he has properly atoned for not only abandoning me in the Publix but for being unable to find the non-existent Republican Water. Because love is supposed to be magical, and we were in love once—once…what was…—and magic brings to life anything you want. If he loved me enough, he could’ve conjured the Republican Water and signed copies of John Boehner’s new book (and maybe even the man himself—did you know he was being deported in 2016?).

So come back, Roo. We have programs to watch, pigeons to feed. Morass the Pig has come to collect on the biannual barn payment and I lost our checkbook. He’s understanding but only to a point (typical), so I need you to come home. NOT BECAUSE I FORGIVE YOU. Because we need to settle up with our landlord, who has a gun and an appetite, and I don’t know which is stronger. If you bring home anything more than a suitcase I’ll never cook for you again. Ciao maschio!