I promise not the touch the cicada cocaine. 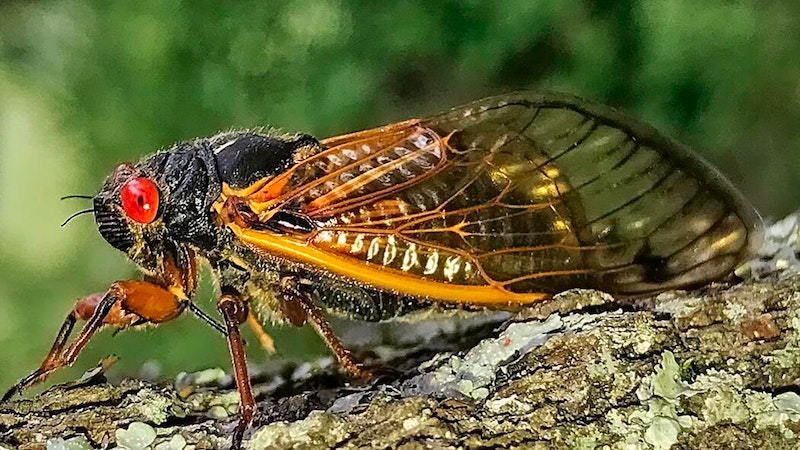 Raisins will dry out on their own without the sun. There’s no need to bring nature into raisins, especially not now, in the middle of May. I’m more excited about the cicadas that are about to erupt out of the ground and terrorize all of the humans on the East Coast of the United States. This is a rare 17-year pleasure that I’ve only been around to witness once: 2004.

The zone was soaked in shell fluid; the air was thick and full of mating songs of these repulsive insects, products of an unjust and angry god. I tried to get to know them in 1987, and 1970 before that, but I was otherwise indisposed (both times on political campaigns, go figure), and my research was cursory at best. “Hey,” I’d ask, “what are you doing? You come here often?” Apparently cicadas don’t respond in the same way as pigeons and other dirt birds when you’re trying to get wet.

But in 2004 I had my chance: I was in Washington D.C. a lot, protesting and advocating for the war in Iraq, which that July surpassed 1000 American casualties. Tragic—I remember. I was in the chambers when the news came over the wire. We all cried. We felt something: pain. It was good, it was good to feel that pain of loss and to know that these men and women were never coming back, that this was a permanent departure from life, that our efforts had sent these people to their graves and it had all been in vain—or so we thought. We never could’ve predicted ISIS, greatest surprise in the world.

Anyway, I didn’t have much to do. The war was happening, it was never going to stop, all was well in the jungle and so on. I took a day trip that turned into a three-week sojourn through Baltimore, where I studied and met with several cicadas and their more educated and, um, “aware” representatives. “You have to understand, Brandon,” one of their leaders told me, “most of us have had nothing to do, nothing to read, no one to fuck under there. Not all of us fall asleep. Some of us are stuck there for 17 years."

This cicada—I can’t remember his name, but he wore a grapefruit pin—called me this week. Doris of the Speckled Pigeon told him that I was coming down south. “How did she know we knew each other?” He said she said it came out late at night after many shots and spirits. Then he asked where Doris was, how he hadn’t heard from her much lately. I just nodded and said, “Yeah, yeah, definitely….”

We got together at an undisclosed park near an undisclosed university. He buttonholed me into a stone corner. “Do you know what it’s like to be buried alive?” I told him that I’d seen Kill Bill Vol. 2. “Oh, yeah,” he said, “me, too.” I must’ve looked stunned because he clarified, “It was pretty easy to get into theaters that spring. We went to so many matinees. Whatever happened to River Phoenix? Has he become a politician?” I didn’t have the heart to tell him that the actor had changed his name to Joaquin and now was reduced to playing comic book characters like the Joker. So sad. I changed the subject and brought up nuclear weapons.

“Yes, I know, others have asked us this: they are under there, and they are active, and they are pointed at outer space. Why, I don’t know. Why would I know? I can’t imagine erecting a society so advanced yet so morally bankrupt as to produce one single missile, let alone one with nuclear firepower. I love this Earth, and it distresses me to think what the surface will look like in 2038. Pockmarked with craters, blankets of ash on the ground? I can only imagine how many more bones we’re going to have to settle for. Those things that are not fun to eat, especially when someone’s already gotten to the marrow.”

This fucking cicada went on and on about bones and I started to leave but then he asked where I was staying. I needed a place to stay. “I need a place to stay.” He told me to go up to a certain street with a certain bird on it and go into a certain apartment building and open a certain door and then another certain door and then another one and then I’d be in a “penthouse” row house apartment with air conditioning and full furnishings and complete privacy. He wasn’t lying.

I haven’t seen the films of David Lynch. Rooster and Monica, my bitchmade relatives, know the man and never stop talking about it. They were on the set of Mulholland Drive, they met Laura Dern in West Hollywood, they tried out for INLAND EMPIRE but were rejected for carrying too many non-native diseases, and they crashed his Christmas party five times, meeting him once. “Meditate with me,” he said. They did, and they claim they communed with Lynch in the “pearl world,” whatever the FUCK that means. I don’t like movies—I like films. I am not interested in gurus making them.

Regardless, everyone I’ve taken up here has said it’s “Lynchian,” which I have to assume means lucky, easy, and convenient, almost miraculous. I agree. My apartment, and its acquisition, is more than an inter-species success story, it’s also a pure example of capitalism. For the price of nothing (except holding this cicada’s cocaine), Bennington the Rooster is allowed to stay in this apartment with nothing in it except a bag of hay and five guns. “Don’t you have a fridge?” No. No I don’t cook. Thank you very much, though.

“You won’t need to hold it long. Six weeks. Six weeks until we go underground again. I can’t stand it, Brandon,” the cicada told me, “I have a wife—well, a few—and they sleep all day, all year. I haven’t fucked in so long. I’m going to kill myself unless I can bring this down with me for the next cycle. Please. Please. Don’t do any of it and don’t let anyone in this building without my presence or permission. Please. Promise me that. PROMISE ME THAT!” Then he started singing and flew away. Cicadas are really irritating, I’m glad they don’t exist most of the time.