An Open Letter to Hobby Lobby

From a now former customer. 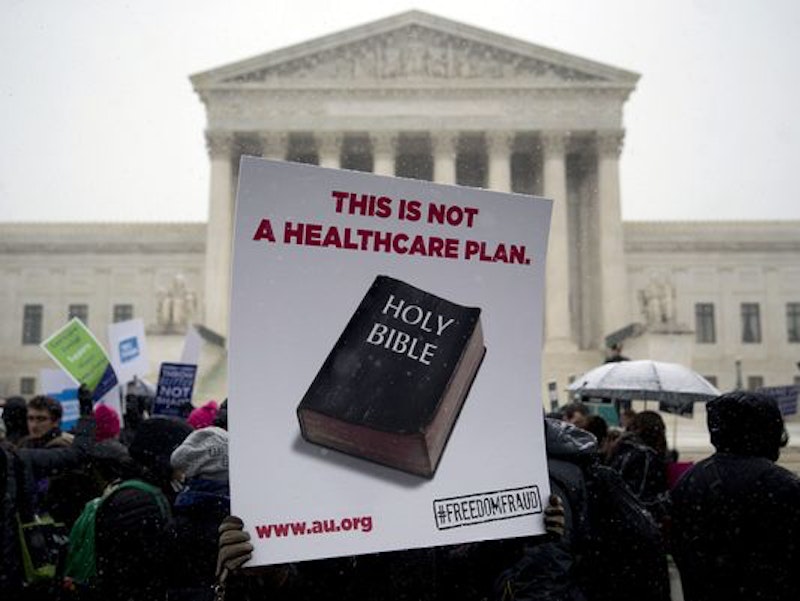 Congratulations on officially becoming a "person" in the eyes of the Supreme Court! It's a pretty big deal, Hobby Lobby, and you get to join a group that doesn't even include your female employees. As a person, Hobby Lobby, you now have the ability to hold religious beliefs. You also have the right to use those beliefs as a reason to deny your female employees access to contraceptives. You are now legally refusing to allow them to be covered by the health insurance you offer your employees.

I understand that if those female employees really want contraception, they can simply pay for it themselves. I hope that your pay them high enough wages to afford a $900 IUD. I'm sure you do. Besides, they are just women, they don't actually need healthcare. I guess if they can't afford to pay for it themselves, the government can always pay for it, right?

"And such an alternative, the Court suggests, there always will be whenever, in lieu of tolling an enterprise claiming a religion-based exemption, the government, i.e., the general public, can pick up the tab." Excerpt from Justice Ginsburg's dissent

I understand, Hobby Lobby, that your biggest problem with these contraceptives is that they can be used in emergencies. I'm also guessing that you’re a little confused about how emergency contraception works. It prevents pregnancy, it doesn't terminate it. It's not an abortion pill. That's a whole different thing, which I'm pretty sure your health insurance plans don't have to pay for. Yes, I know that emergency contraception could prevent an embryo from implanting. But primarily, they work by preventing the release of an egg, or by preventing an egg from being fertilized. They don't actually do anything if you are already pregnant.

"Would the exemption the Court holds RFRA demands for employers with religiously grounded objections to the use of certain contraceptives extend to employers with religiously grounded objections to blood transfusions (Jehovah’s Witnesses); antidepressants (Scientologists); medications derived from pigs, including anesthesia, intravenous fluids, and pills coated with gelatin (certain Muslims, Jews, and Hindus); and vaccinations (Christian Scientists, among others)?" Excerpt from Justice Ginsburg's dissent.

I'm also concerned about how much you really care about your employees. You know who I'm talking about, right? Those hundreds of women who work for you, whose hard work helps make profits. Or the daughters and wives of the men who work for you. Hundreds of people without whom you wouldn't be able to exist, who may or may not hold the same beliefs that you do.

"The exemption sought by Hobby Lobby and Conestoga would override significant interests of the corporations’ employees and covered dependents. It would deny legions of women who do not hold their employers’ beliefs access to contraceptive coverage that the ACA would otherwise secure." Excerpt from Justice Ginsburg's dissent.

“Today’s decision jeopardizes the health of women employed by these companies... the owners of for-profit companies should not be allowed to assert their personal religious views to deny their employees federally mandated benefits,” White House press secretary Josh Earnest.

Hobby Lobby, you’re more concerned about saving the life of a not-yet-conceived fetus than you are about the life and health of that potential baby's mother. I'm also worried about what might happen to these women, most of who are not rich, if they do become unintentionally pregnant, since you want to make it more difficult for them to prevent this. Their options in this are so limited already. Did you know that the babies born from unintended pregnancies are at higher risk for low birth weight and preterm birth, and that this places them at higher risk for health problems for the rest of their lives?

So I have to ask, Hobby Lobby, just how Christian is it to jeopardize the health of your employees, and to force your religious beliefs on them? To remain uneducated about how important access to contraception is for women's health, while denying it to so many of your employees who are women? How Christian is it, Hobby Lobby, to show so little love and concern for those less fortunate than you?

I don't work for you, Hobby Lobby, but I am a woman, an artist, and am currently unemployed. I've made purchases from you in the past. Wouldn't working at an arts and crafts store be a perfect place for me? I could even spend some of my money on art supplies right where I work! In fact, I've been looking for a job exactly like that. But not with you, Hobby Lobby. I have no need for contraception, medically or otherwise, right now. But I like my employers to at least pretend to care about me, even just a little. And I think you've made it clear that you and your buddies, those five male Supreme Court Judges, simply do not care about the health and freedom of the women you employ.

Just another woman who won't shop with you anymore.