Why You Shouldn’t Have Sex With a Jacuzzi

You can save money on sex toy batteries if you have good plumbing, but beware the risks. 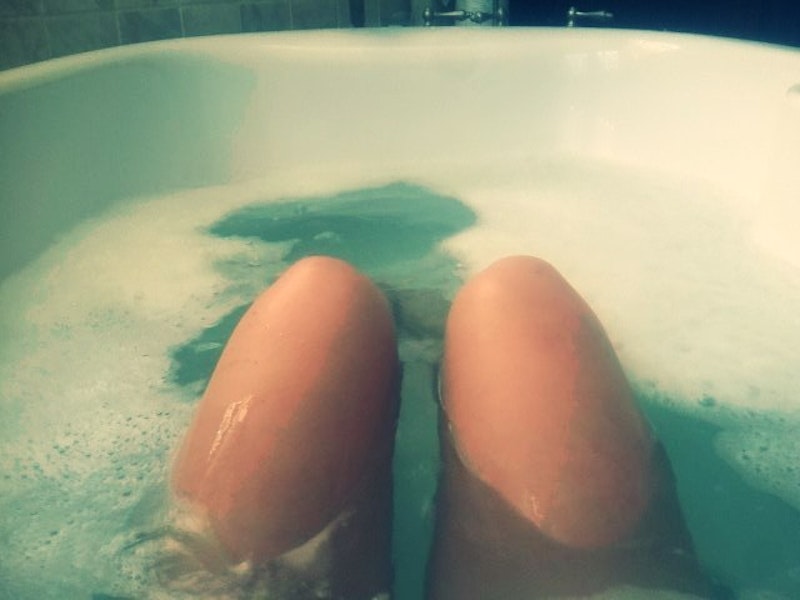 So we’re renting this McMansion in the country while we’re trying to sell our “fixer-upper” Victorian, and in addition to central air, this new house has something I’ve never had before: a built-in Jacuzzi tub in a swanky bathroom (definition of swanky bathroom: has toilet closet situation with separate door).

After being clenched up at a laptop writing and editing all day, sometimes I like to sink myself into this tub. I’ve been known to exhibit such environmental carelessness as opening the windows over the tub in winter so it’s cold in the room, hot in the tub, and turning up the air conditioning so I can still take a bath in the summer. I’m actually far too hot-blooded for a hot bath to begin with; I only stay in for 10 minutes, immediately getting into a cold shower afterwards. But the hot water on the pinched nerves? Does wonders for migraine prevention.

As you do when you’re pondering over a scene, I thought about the logistics. Okay, so if a guy and a girl were in this hot tub, how would they have sex? Well, she could wrap her legs around him and be on top—she could stand and lean over and he’d get her from behind, nah, she could slip if she was standing and with all that motion? Soap yay or nay? Jets aimed in which direction?

Jets. Hmm. I hadn’t noticed they were movable before. You can point them in any direction you want. Nice. Well, so if the guy—wait, does she even need a guy? Maybe he’s there, but he’s listening to the baseball game and so he’s just watching. Couldn’t she just slide down like this, throw one leg over the edge of the tub (watch out for that candle because yikes with the fire hazard and towels…) and… mmmm, yes, she could do this even without the guy around. You know, my fictional character. She would love to redirect these jets so that the… no, this jet over here allows a closer proximity to the… yes, that’s the one. Then she would just lie back and enjoy the sensation.

And what a powerful stream of water it is! Who knew? So much money spent on batteries and sex toy shopping online and really all you need is good plumbing. Yes, I will stay here even though my face is beet red and I’m lightheaded and I really should be getting into the shower now to cool off because damn, I didn’t realize this water was so hot. How long have I been in here? Two more minutes, I told myself. The unrelenting, pulsing jets are so energetic, strong and sensational. I’m a Jacuzzi believer. Sign me up for a t-shirt.

Alas, finished with my novel research session, I got ready to stand. But I’d been in the water far too long. My hands were wrinkly, my hair was greasy from floating around in the bubble bath, and I was so hot. I stood up. Water gushed from my nether regions like a faucet: the dam of the Hoo-ha River had broken and I heard the water rushing back toward the tub. How big of a space was that, I wondered, remembering baby-sized things had once come out.

The next thing I knew, I was flat on my soon-to-be bruised ass. I hit my shoulder on the faucet on the way down. The shock of falling and head-dunking into the pond seemed to snap me out of the fainting spell. I slowly raised my half-drowned head out of the water, more water gushing from my ear, clawed my aching muscles out of the tub and into the shower, climbing under the straight cold water. I was sore for three days from the fall.

Fainting and drowning are so unsexy. Fictional characters have the luxury of not needing safety warnings or helmets when they engage in sex with tubs.