A Medieval Allegory for Bitter Cousins

Looking at cousins Richard II and Henry IV for clues as to the future of this most honorable bird. 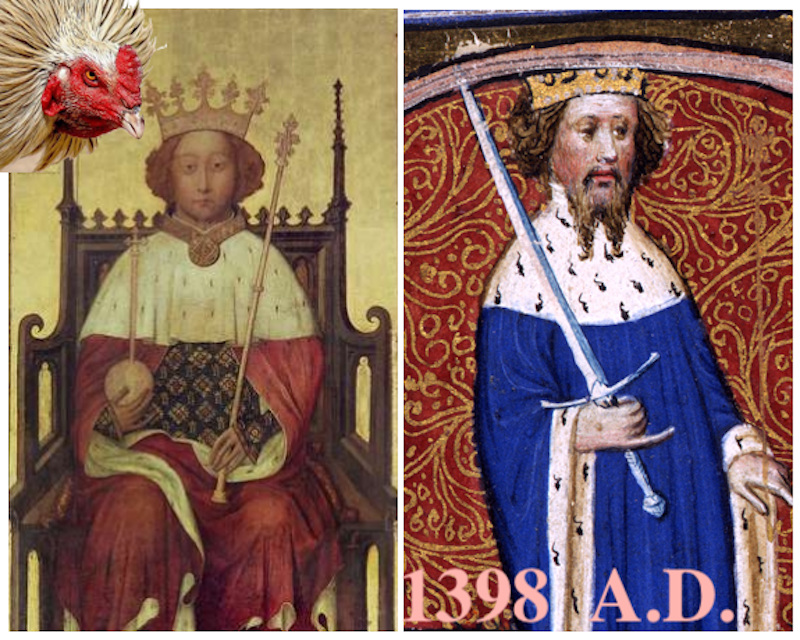 “I am the happiness of this world.” A quote impossible to attribute, its author lost in the sands of time, so I take it as my own. Since I’m admitting this, it doesn’t count as plagiarism (look it up). But am I? Am I the happiness of anything? I have my doubts. I’m still locked up in this bootleg Betty Ford facility for the foreseeable future. My family’s efforts to get me out were either misguided or imagined by myself in a fugue fever state. Such is the state of mind of an attention whore in withdrawal. It’s not just the heroin: it’s the spotlights, the camera flashes, the selfies on the street, the rush of dopamine when you post a bomb selfie on Insta and wait three days to re-open the app so that all those dozens of likes can hit you at once. Fuck I feel like I’m going to pass out just describing it… sorry… I’ll have to sit down now… writing this in a Starbucks bathroom so excuse the odd spacing…

I have a strange relationship with time. It’s my whole family… we don’t understand it ourselves, to be honest. It was a little weird when we outlived our parents, and then all the friends we grew up with, and after about six generations of turnover we threw our feathers up and chose no longer to look a gift horse in the mouth. After all, as aggressive and insistent as the Quibbits clan can be, we are not ungrateful. No—we cherish this life, and the unique opportunity every one of us has. Because of our unusually long lifespans, the family has a valuable perspective on everything because we’ve seen everything. I won’t reveal it all now, but let me take you back to the Dark Ages…

1398 was not a good time to be alive for the human race. Even if you were a king or an aristocrat, there was no air conditioning, no indoor plumbing, no protection from primitive diseases we dismiss today. If Macbeth wasn’t visited by those bitch angels, maybe he wouldn’t have fucked up and blown up his spot. Dude was mad cucked anyway, his wife deserved to rule Denmark or wherever that book takes place (I don’t read novels). Shakespeare (or “Bald Billy” as I used to call him, to his face) was talented but let’s not get ahead of ourselves. He “invented humanity”? What the fuck was Harold Bloom smoking? Probably nothing, considering his bloated, disgusting body. But I digress. Let’s go back to the Middle Ages.

Or Dark Ages. What to call them? Back then, we just thought we lived in Hell. Everyone died in their 20s, none of the water was clean, people were unbelievably stupid, and there was nothing to do. For fun, I mean. Sure, I participated in the recreation of the time (public humiliation and executions), but only because I’m a bystander, not an upstander. I’m grateful to have arrived in the United States before the 1930s, because—and again, duty bound, I must be honest with you—I’m not sure I would’ve been the male ally sticking his neck out against the rise of Nazi death squads. But that’s just me: a mediocre person.

Birds are people, too. But in 1398, there was no technology. We couldn’t hear the Earth’s magnetic song. We only knew each other and the world that felt so determined to make us suffer. I wasn’t privy to the private court exchanges between King Richard II and his cousin Henry Bolingbroke, but as you well know, Bolingbroke was exiled from the country by his own cousin. I did, however, know John of Gaunt, who died suddenly in 1399. Henry IV assumed the throne shortly before the turn of the century, and by the end of 1400, his cousin Richard II, the former king, was dead in jail. Thirty-three years old, starved to death.

I tell this story and will not elaborate except to say: consider who’s the cousin, and who’s the king. Take note of their actions, and remind yourself in the future when history repeats itself. This time, no blood will flow—only feathers will fly.