I’d rather watch a slasher flick. 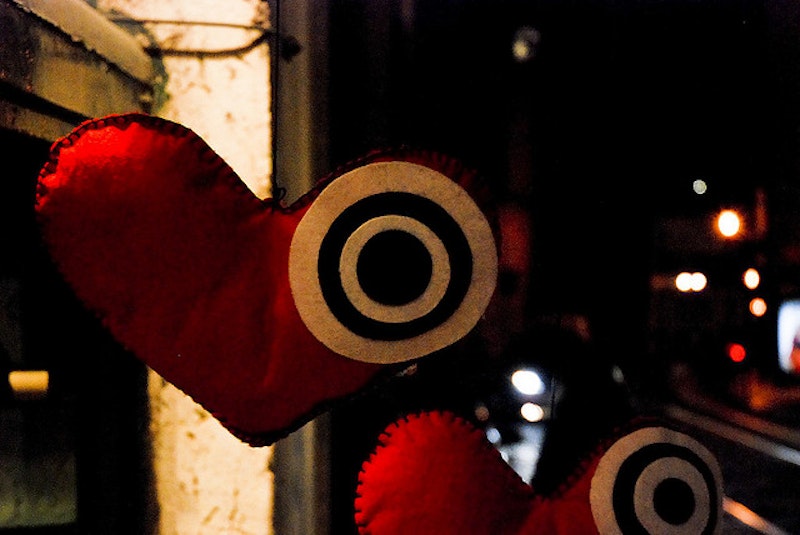 I get anxious as Valentine’s Day approaches. Even when there’s someone special in my life, I’m strangely afraid of what surprises, or lack of, will be in store. This isn’t all in my head. There are some very solid reasons for my trepidation and if I get my hands on Cupid one day, well, it won’t be pretty.

Guys seem to turn into baboons on February 14. Or maybe I should say buffoons? In any case, men are inclined to be romantic, they just don't know what to do or say. Their solution? GPS the closest florist and stop by CVS and buy a heart-shaped cardboard box filled with thigh-enlarging ingredients. Do you know how many unopened cardboard boxes I’ve thrown away over the years? Well, not every year. Sometimes I give the dog a few treats just to test the old adage about dogs and chocolate.

If you’re residing on cloud nine come Valentine's Day, no worries. Love will come trampling over you in all directions. You’ll be surrounded by Hallmark reminders, balloons, teddy bears and battery-run talking hearts. One could go into red alert overload if exposed for too long. And the worst is yet to come. During Valentine's Day week every romantic comedy/tragedy film is dragged out of the classic archives and aired repeatedly on all 500 cable channels. But hey, if I'm going to watch a flick alone on Valentine's Day, I want it to be some action packed one where one of the partners dies, preferably early on in the movie.

It seems everyone under the influence of Cupid wants to tell you about his or her luck in love. I have to listen to all the special celebratory plans they’ve made and they’ll most likely be wearing shades of pink, red or worse yet, a ridiculous tie or turtleneck with hearts on it.  I mean, February 14th isn't all about love. Remember the St. Valentine's Day massacre? I really don't want to hear their gushing, just leave me alone with my shots of vodka.

I usually spend the day not thinking about love but sex. I open the drawer with the pink teddies and other lacy underthings and wonder if I should wear them in honor of the holiday. Just as quickly, I shut the drawer. Navy blue cotton Hanes for Women works just fine.

My parents’ wedding anniversary is on Valentine's Day. Nothing can top that. Everything else has always paled in comparison to their love affair that’s lasted more than 60 years.

Plus, finding a combination Valentine's Day/Anniversary card can be nerve wracking.

Seriously, I'm really a romantic at heart, but if I see that fat little naked boy, it’s all over.