A Community of Ink

So it goes at the Philadelphia Tattoo Arts Convention. 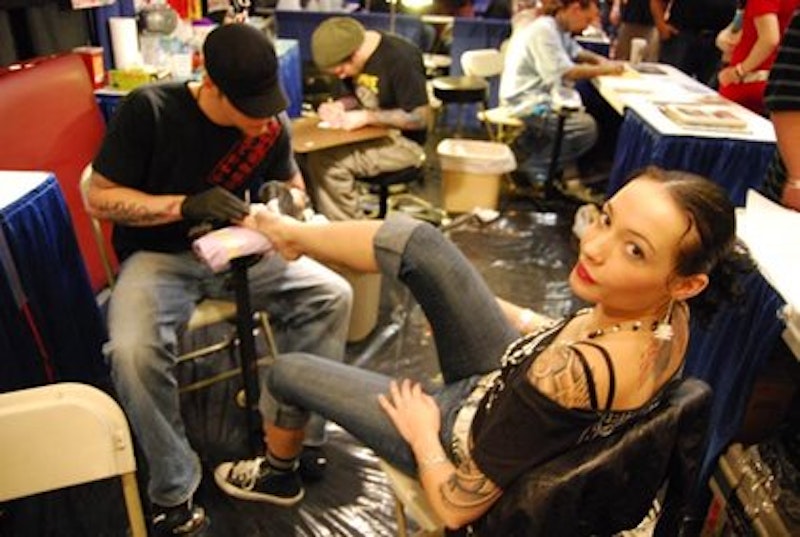 I got my first tattoo when I was 20; "so it goes" in small black script on my left arm, overcharged at some out-of-the-way shop in Dublin. I'd just finished reading Slaughterhouse 5

This was the 15th Annual Philadelphia Tattoo Arts Convention, with hundreds of tattoo artists from all across the country, as well as certification courses and workshops, contests for "Best Tribal Tattoo" and the like, and booths selling a lot of harsh metal-and-wood jewelry and bondage-inspired drawings. PBR tallboys are $5, Johnny Walker Red and Tullamore Dew are rather more expensive. There are burlesque dancers and honest-to-God freak show acts. Permanent Mark is there. Amy Nicoletto from LA Ink is there, looking just as crazy as she does on TV. Actually, pretty much every star of every tattoo reality TV show is there, signing autographs, selling books, tattooing anyone who can afford it. There are a lot of punks and hipsters and shirtless old biker guys. There's a wildly overcrowded piercing standing. I remember a hot rod on display, a tattooed frog preserved in formaldehyde and an anime-adorned belt with a built-in bottle opener I almost bought for $20. Somehow, despite hundreds of tattoos happening all at once, I never really catch that tattoo smell (disinfectant, inks, oozing blood, sweat). The Philadelphia Convention Center must be remarkably well-ventilated.

If you're looking to get tattooed having hundreds of artists at your disposal is ideal: no two tattoos are ever the same, after all, because every artist has his or her own distinctive style, their own preference on inks and guns. Spend fifteen minutes walking around the convention and you'll understand just how many different ways there are to tattoo a cross or a skull. Of course if you're not looking to get tattooed it's still a pretty easy way to kill an afternoon—it took me and my girlfriend more than an hour just to walk up and down all the aisles, only stopping a few times to admire some particularly good work, and re-up on PBRs.

At Philly.com you can check out a slideshow of the convention, and read some hyper-moralizing comments about how very, very déclassé tattoos are, an odd attitude to have when more than one in five Americans are tattooed (among 25-39-year-olds its more like one in three). Granted, those statistics probably refer more to Americans with a barbed-wire chain around their bicep than Americans with face tattoos. Still, in Baltimore, where most of my friends have far more tattoos than me, it's easy to forget that not everyone is saving up to add color to their chest piece. Apparently the outlaw appeal of tattoos is still in fine order though, judging by the "NO WEAPONS!" sign at the entrance to the Convention Center, the metal detector scans you have to go through after buying your ticket, and the half-a-dozen or so nervous looking cops walking around.