Torturing me with its unabashed genericism. 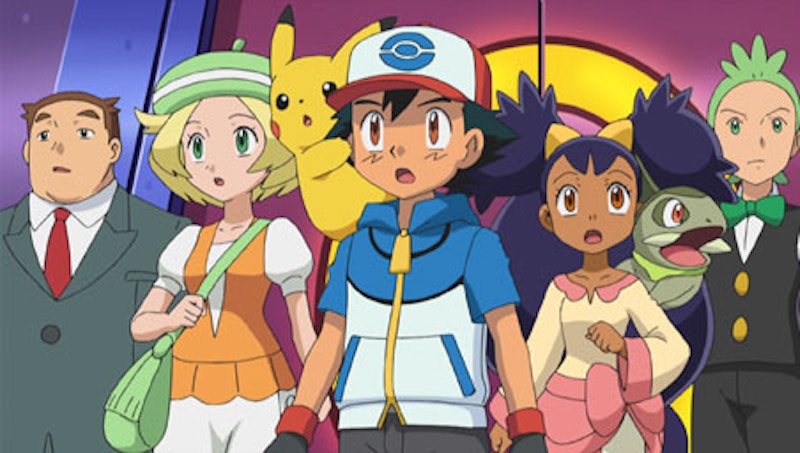 Move aside, Ninjago. Forget you, Mario and Luigi and Yoshi. Hasta luego, Angry Birds. Pokemon, for the moment, anyway, reigns supreme in my crib. There are illustrations of Pokemon pictures everywhere. Impromptu Pokemon quizzes erupt with great frequency; these quizzes are typically failed. Pokemon moves are faked in an impromptu way and with great enthusiasm. Often the television is devoted to disgustingly telegenic cartoon creatures who machine-gun chirp their names while perched on the shoulders of smirking anime beanpoles. There are unironic requests for Pokemon swag. For now, there is no escape, but that's okay; I can handle it. Parenthood inoculates one against the effects of most mass-produced, pop-culture crap, even if some things aren't without their own unique charm: incredibly, I'm somewhat partial to Spongebob Squarepants.

Anyway, from what I'm able to tell from the three or four episodes I've half-watched, saucer-plate eyed misfits either grapple with grimacing, narrow-eyed baddies or pit their mutant-powered animals against the mutant-powered animals of strangers in pitched battle royales that are never to the death. In other words, Pokemon Black & White: Rival Destinies is a show Michael Vick might strongly encourage his son to watch before introducing him to the harder stuff.

More troublesome, though, is the show's theme song, 31 seconds of phased-to-gloop guitar schlock, rote lyricism-by-committee, and co-ed harmonizing that never fails to simultaneously agitate and ingratiate. It makes me want to ladle acid into my ear canals, and last weekend it seemed like I had to hear it five or six times, which was five or six times too many. Obviously, the theme is accompanied by kinetic animated constructs, but—and this is the crux of the problem—it's so on-the-nose corny and self-serious that it has the unlikely effect of upstaging, emasculating, and reducing the impact of everything surrounding and supporting it. Like, when those anonymous, character-free session guitars surge forth, all I can think about is how this theme was probably like one of a million themes concocted by some gaggle of missed-the-big time L.A. session musicians moonlighting from gigs as porn soundtrack composers, just to pay the rent, to keep the light on. I'm picturing them getting paid a couple of hundred bucks for this song and the rights to it—the words are so unspecific and general that a Full House remake could've tried it on and it would've fit fine—only to maybe never even know that the turkey eventually became the American face of a deathless Japanese franchise. But mostly I wish to God that I could wrest the Rival Destinies song off of mental repeat and out of my consciousness and back to the infernal depths of Hell from whence it came.