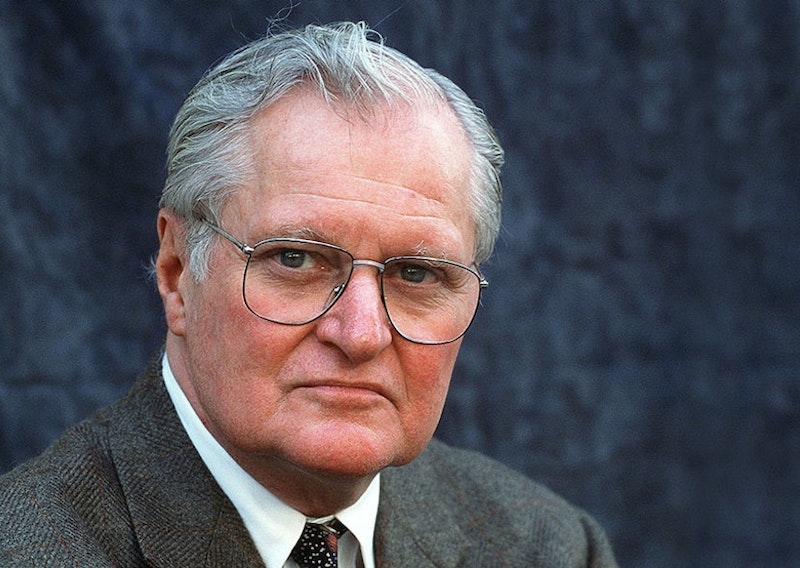 It’s a vast body of work, an award-winning body of work. In a typical piece of big apparent praise, the critic Langdon Hammer says that it "looms large over American poetry"; indeed, it looms over America (and encroaches on France) like an cloud of inert yet portentous gas. In the poetry of John Ashbery, meanings are elusive: extremely elusive, so elusive that one might be forgiven for speculating that they do not exist. The work, in short, is nonsense. Now, possibly, there is such a thing in literature as amusing nonsense, or beautiful nonsense, or cool nonsense. John Ashbery's poetry isn't any of those good kinds of nonsense. Its nonsense is unadulterated and unredeemed.

Really, you can stick it in anywhere and come up with a dipperful of dreck.

divide the answer among them
on the facade of the spinning jenny as it
approaches improbably
a toxic avenger . . .
Later amid the hay of reasons
we sort out a sparse claim.
Was it to be thirty he dressed her
in black-and-white checkers of gingham,

perforce, did the lad go athirst
thinking no doubt too late of the spines,
pelage of mingled hairs and spines,
when all would have meant protection
for him from the main highway, the chief.
A porch
rattles in the near, clear distance.

("And the Stars Were Shining")

I am not reading it all, searching for the worst bits; I am dipping up and dishing out the typical.

One important lesson that Ashbery's work can teach us, if we were confused about this: vagueness is not the same thing as profundity. "was any of this present/and how could this be/the magic solution to what you are in now"; "the numbered land stretches away/and your house is built in tomorrow"; "the time is ripe now and the adage/is hatching as the seasons change and tremble/it is finally as though that thing of monstrous interest/were happening in the sky," etc. ("As You Came from the Holy Land.")

Despite his association with Andy Warhol and postmodern New York and his famous mish-mash of obscure Latinate vocabulary and semi-contemporary slang, Ashbery is a very late-breaking high modernist, an old-time literary genius, a kind of last-gasp T.S. Eliot or HD. He's obscure, it might be thought, like James Joyce was obscure, and ever since the modernist genius disappeared in 1962 people have been nostalgic. They remember "Art"—big, difficult, ambitious Art, Art that seemed Important even if it was hard to say exactly why, Art that distinguished the people who knew from the people who didn't.

Sometimes I find Eliot and Joyce rather annoying. But Ashbery came a half-century late to the experiment. And more importantly, his version of radical high modernist innovation is flat, bored, and exhausted. The power, such as it is, comes from the extreme multiple clashing ambiguities, so that at best you could sort of amuse yourself trying to find a construal or an association, something for the words to mean.

It would be deplorable if the rain also washed away
This profile at the window that moves, and moves on,
Knowing that it moves, and knows nothing else. It is the light
At the end of the tunnel as it might be seen
By him looking out somberly at the shower,
The picture of hope a dying man might turn away from,
Realizing that hope is something else, something concrete
You can't have.

There’s nothing of interest about the sound of the words (though this is not merely clotted and actively repulsive, as often in Ashbery), and nothing of interest in the thought, just ambiguity achieved essentially by emptiness. In Ashbery's poetry, people and objects become abstractions, abstractions bounce around for a while, and the whole dissolves into gassy balderdash. "But now moments surround us/Like a crowd, some inquisitive faces, some hostile ones,/Some enigmatic or turned away to an anterior form of time/Given once and for all."