Gender roles and expectations in The New York Times and Eyes Wide Shut. 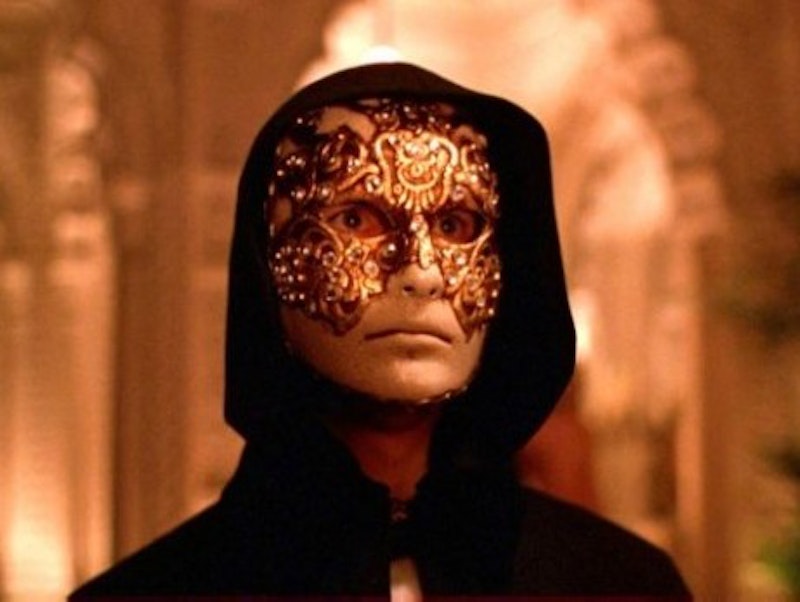 Live and let live! Feh! The New York Times has finally tackled polyamory with a glossy magazine feature that runs over 10,000 words. The Times remains fairly genteel when it comes to sex, but with Fifty Shades of Grey five years behind us, it’s time the Times acknowledges and investigates something that the rest of us have known about for years. But have we heard from the upper middle class or the Mr. Moneybags set yet? Those who live by All Things Considered and need Fresh Air to survive. Don’t worry—the Sulzbergers have you covered. “Is An Open Marriage a Happier Marriage?” is the article’s headline, and it follows half a dozen couples in various states of polyamory, most of whom are obviously incompatible and should’ve never married in the first place. Take Elizabeth and Daniel, the first couple: she was raised a strict Catholic, he wasn’t. Sex wasn’t happening as much as Daniel liked. He brought up the idea of opening their relationship, and “He was not surprised when Elizabeth rejected the idea” is the first line that made me laugh. And then, after being diagnosed with Parkinson’s at 44, Elizabeth meets another man and spends the night with him. As expected, Daniel freaks out. Despite the frisson of civility, most of these people seem horribly depressed and repressed, desperate for something else, someone other than their spouses.

Author Tammy Nelson writes: “Most people don’t like the word ‘polyamorous’… It’s not easy to say; it sounds a little French, with all respect to the French.” Oh, but of course. This isn’t new, plenty of couples have arrangements: mostly people who work on the road, whether they’re rock stars or air marshals. But instead of looking to The New York Times for guidance and relationship advice, instead consider Stanley Kubrick’s Eyes Wide Shut. I saw it for the first time last week, in a huge theater, and it was incredible: I spent the rest of the night in a euphoric daze, unable to articulate and high on the hit of an amazing movie. It’s so strange having a vague, peripheral familiarity with a famous movie’s premise ingrained over decades, end up shattered once you actually see it.

There’s so much more in this than any contemporary take on gender roles or expectations in popular culture. Eyes Wide Shut remains disguised by its deceiving and Mandela-esque reputation. Have a look at a table of prominent film critics discuss it with Charlie Rose in 1999: Janet Maslin is the only one that really gets it, and all the guys are complaining that the thing is too long, it doesn’t make sense, those were obviously sound stages—who cares? It’s an alchemical movie, and it communicates so many ideas and concepts without condescending or spelling them out to you like a lecture. So much entertainment these days is artless lecturing and moral posturing. Only through stained glass eyes is life like this visible.