Why Do We Celebrate Halloween?

Believe it or not, the reasons extend beyond our desire to dress ridiculously and get drunk in bad lighting. 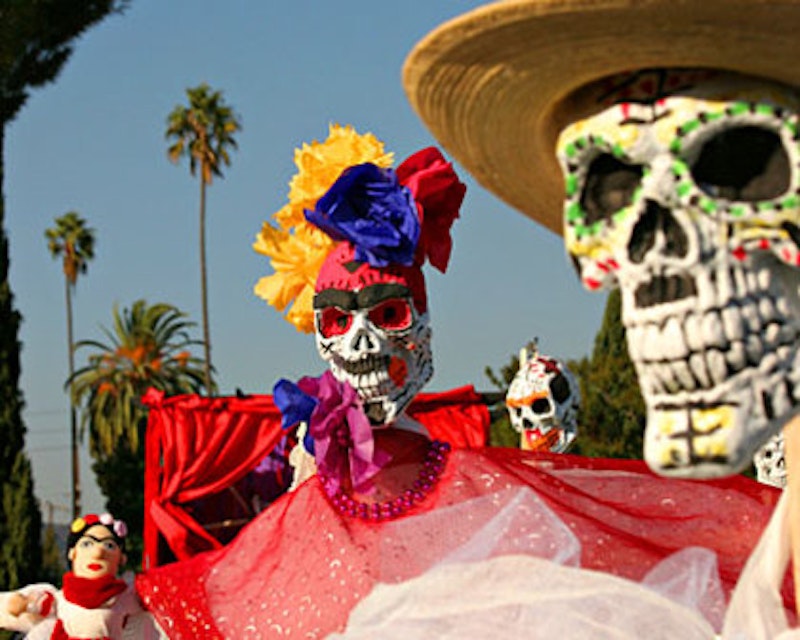 Like the spooky Weird Sisters rap in the opening sequences of Shakespeare’s Macbeth, the transition from the waning strains of colorful fall to the opening stanzas of ashen winter truly have a contradictory "fair is foul, foul is fair" feeling to it. There is nothing sweeter than the first day of snow in December, the smell of wood burning in the hearth, the twinkle of Christmas trees through neighborhood windows and the promise of the treasure that will arrive underneath their branches. But there is a hollow feeling when you’re standing at winter’s door. Though it happens every year of our lives, we fear afresh the long stretches of icy, gray skies that lay ahead—the way the trees hang dead and lonesome against our windows, shuddering, the way the golden beaches become wastelands, the way we walk down the street, grimacing and holding ourselves—preparing ourselves, it seems, to be slapped by some massive, scowling force.

To celebrate this annual leap into darkness, how fitting perhaps to gather round with some friends to celebrate death itself?

The word Halloween itself stems from “hallow” which in Old English meant “saint” and “eve” signifying the medieval English tradition that honored the Christian saints on November 1. Pope Gregory IV put the day into the Church observance calendar in 837. This “holy” day indeed had much earlier, spookier Pagan incarnations and was thought to be celebrated as part of the raucous Celtic new year celebration. For the Celts, November 1 was called “Samhain” and on the eve of this day,

Witches and other evil spirits were believed to roam the earth…playing tricks on human beings to mark the season of diminishing sunlight. Bonfires were lit, offerings were made in dainty foods and sweets, and people would disguise themselves as one of the roaming spirits to avoid demonic persecution.

In North America the Aztecs had a similar festival to honor the “Lady of The Dead” Mictecacihuatl, queen of the underworld who watches over the bones of the departed and was thought to be dead at birth. Fused with the Catholicism that was brought to the new world by the Spanish in the 16th century, the Mexican tradition of “Day of The Dead” also occurs on or around the Christian All-Saints Day. The Spanish at first were appalled to see the Aztecs dancing joyously in graveyards with painted skulls over the faces—seemingly mocking the dead—and they tried in vain to eliminate the tradition. Dia De Los Muertos, which celebrates (not mocks) the life of the deceased, still thrives in Mexico and in Mexican-American communities and one can easily see “calacas” or wooden skull masks sold in Mexican and American shops near the end of October. Also mixing the bitter with the sweet, another common tradition of Dia De Los Muertos is to make skulls out of sugar that feature the name of the dead on the forehead. Standing vigil, sometimes all night by the dead soul’s grave, the skull is eaten by the friends and relatives of the dead to remember and appreciate them.

As the 31st approaches, one can’t help but imagine kids (and kids-at-heart) across America giddily unearthing their ghostly disguises from the trunks and back closets—right now, they’re straightening out their witch caps, testing out their plastic fangs, and wrenching open the crusty dried caps off those vials of sweet, cornstarch blood. In its modern manifestation, Halloween, like St. Patrick’s Day or Valentine’s Day, is a boozy, brash commercial extravaganza. Bars and restaurants whip out the fake cobwebs—theme parks hire thousands of temporary employees and offices close early so fun-hungry colleagues can put on their fishnets and go crazy for a night. From a more psychological standpoint, Halloween has to be the first holiday ever created that actually honors and parades our greatest fears. While Valentine’s Day, in theory, celebrates love and St. Patrick’s Day celebrates, well, getting drunk, Halloween is more complicated than that—it’s a night to celebrate the bizarre, the flamboyant, and the creepy, it’s a night when the fetish goes public, the diabolical becomes trendy and present pop-culture comes face to face with the afterlife.

It’s a weird, weird holiday. If you’re like me, an average about-town, kind-of-young person, here’s how the night might go:

It’s eight p.m. and the specter of death knocks at your door, accompanied by John Wayne Gacy, a stabbing victim that looks like your sister, a chainsaw-wielding lumberjack and an undead John Lennon. You give them handfuls of tiny candy pistols. Behind you is an orange-lit door, you’ve pointed your speakers to the street and they’re blasting an unending loop of someone screaming. At nine p.m. you walk around the neighborhood and see that there’s a graveyard in the dog-park, a lynched dummy hanging from a lamppost and Jack and Nancy Johnson, who usually work at a daycare they started, are dressed as what looks to be hippie-zombies—Nancy has an axe through her chest and Jack’s smiling mouth is dripping blood.

At 10 p.m. you leave the house for a night on the town—and in the backseat is the bride of Frankenstein, a sheriff and a tampon (or your cheeky friend Bob). At midnight you’re buzzed and a green-faced alien with a boyfriend who is a spaceship asks you where the women’s room is. At one in the morning a suicidal stock-trader with a bloody noose around his neck spills his beer on you and orders up a round of smelly, smoking shots of what looks to be hot pigs blood to apologize.

Two in the morning and you’re at the bar, danced out, bleary-eyed, your friends ditched you and you don’t really know which part of town you are in. Looking at the post-apocalyptic wreckage left, you get the feeling that tonight, maybe your bizarre nightmares have finally come true: there’s knife-wielding clowns chatting with man-sized fetuses, skeletons making-out with hairy-legged spiders, snakes playing pool with Hannah Montana, and Satan sharing a smoke with Dick Cheney. Hear about the hottest (scary) item flying off shelves this haunting season? Sarah Palin masks, now only $25.98 for the “deluxe version” on Amazon.

The point is, like our ancient counterparts, we are still ushering in a new, not-so-welcome part of the year by honoring death in all its forms. And why not? The beaches have closed down, the leaves are falling, the harvests are over—nature is dying as the sun takes its vacation to the other hemisphere and it’s time to hunker down for the winter. Some say trick-or-treating ends when you’re about 15 but I’ve found, strangely, that the older I get, the more I like dressing up and pretending. It feels good to let yourself die every now and again, let loose, let go, let it all hang out—forget about your job and your car and your bad haircut. For one night, you get to leave yourself at the door—for one night you get to be part of history—you’re Marilyn Monroe on heroin, you’re Nixon with bags under your eyes, you’re The Zodiac Killer—or you’re Superman and you can fly from the bar to Taco Bell in a blink. Or maybe you don’t want to be creative and you’re just a good old-fashioned zombie for a few hours.

Hell, it might just be the most fun you have all year.