When financial conditions or the impending collapse of your industry get you down, just think of a good movie idea or a roast beef sandwich. Like Jesus did. 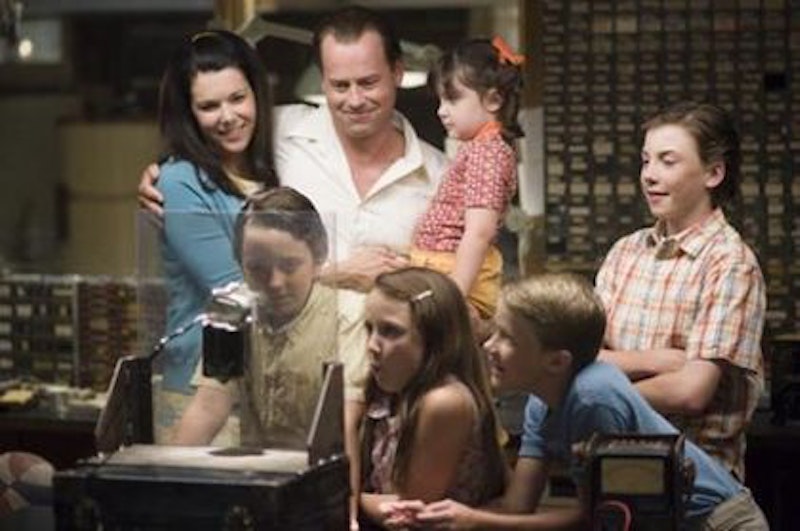 I dunno about you, because you're like some kinda power-achiever or whatever, (or actually maybe not because you are reading this column) but anyway, basically I don't like to do anything. I don't even like to think, but I can't help it, the thinking. At least that's what I think it is: thinking. I believe it is Thinking. It's kinda like in that Major Motion Picture The Last Temptation of Christ where Willem Dafoe in the role of Jesus says something to the effect of how he (Jesus The Christ) doesn't write down his famous sayings and parables and all that stuff to prepare for his speaking engagements, it all just kinda unspools in his head and then he says that shit. That's exactly how it works for me, only I sit around on my ass and think of ideas. Or maybe more like, ideas show up in my head and then I think about them. It's like a teevee show in my head where I watch ideas. I love teevee.

A long time ago I invented this idea where you have a camera mounted some place on the back of your car and some monitors on your dashboard so you never have a blind spot. I saw some car company has that now. It's not like I got a case for a lawsuit or anything, because like I said, all I did was think of it, you know? That other Major Motion Picture Flash of Genius is about this guy who invents the "intermittent windshield wiper" but then he gets ripped off for the patent or something by all the car companies, I guess. Man, no offense, but what a boring idea for a movie. Who decides they wanna go see the movie about the guy who Invented The Intermittent Windshield Wiper And Then Got Fucked Over By All The Car Companies? Bleagh. It stars Greg Kinnear, who I used to watch on that teevee show Talk Soup on the E-exclamation-point cable channel, and he was pretty good on that with the "Señor Sock" sock puppet and stuff, but now he's the guy who invented the Intermittent Windshield Wiper? See, I get ideas for movies that are a hundred million times better than that in my head all the time, and I watch them, in my head-theater, which is why I think I am not a Hollywood Movie director. I don't need to make the movie, all I gotta do is think of it, you know?

I watched this one movie in my head the other night about Vampires who are in the Mafia, entitled Vampire Mafia and it totally kicked ass. After the movie was over (I'm betting there will be a Sequel) I even went through a coupla levels of the video game based on the movie I invented and premiered in my head-theater. I'm not saying I invented the idea of Vampires in the Mafia before anybody else. Unless I did, in which case do not fuck with that Idea or I will Sue your ass, umkay?

I don't only think of outstanding Major Motion Pictures. Pour example, I don't like to cook, but I like to think of things to eat and how I would cook those things I thought of to eat. And whenever I think of something to eat, it's always way better in my head than when I go and get it, you know? The other day I was at my job (I still have one) doing some work and I had to buy some crap over the Internet, but I couldn't get started because the Web-thing said I hadda update the fucking company credit card I use to buy shit for my job, so I called the place and I was all like "Look, I'm trying to be proactive and preeminent or preemptive or whatever and get the credit card info updated before I make the order on the Internet," and the guy is like "no, you gotta make an order, otherwise you can't change that stuff," and so I'm pecking on my keyboard doing the goddamn hoop-jumping on the Internet and I just got this thought balloon of a Roast Beef sandwich. And I thought "Yeah, man, when I get done with this bullshit I'ma go get me a delicious roast beef sandwich somewheres." Like The Jesus, it comforted me in a time of stress in my workaday world, you know?

Maybe I need an assistant to actually go and do the shit I think of, and the way they (and you know who They are) are firing motherfuckers at the car factories and everywhere else, I think I'll be able to get one for a pretty reasonable fee, you know, and then I can get my new Assistant to get going on this other Idea I had the other day about The Economy. Before I get fired from my job, I'm gonna start a new career as a Life Coach. I will advise errbody about what I call THE HARD ECONOMY.

It's like, there's always some Economy out there, even if you lose your job, you know? People who work at places where they build cars are kinda fucked, because this thing where people buy cars all the time is drying up, and I work at a weekly newspaper and all I hear is all this whining about how the Industry of newspapers is gonna be extinct in a coupla years, and you know what? I don't think so really, but OK, maybe they will, but also you know what? People need to get down on their hands and knees and thank Mr. Jesus for the nice ride they had writing stuff in newspapers and magazines. I mean, really, I been Getting Paid to poop out a column (every other week) in a newspaper for 10 fucking years and I know that shit is probably going away soon, because with these newspapers and magazines it's all about tightening their shit up and cutting budgets and stuff all over the place, you know? Plus it's like, right now, I bet you could fucking fire anybody at a magazine or newspaper and just be like, "sorry, ese, it be's like that: budget cuts." Writing, man, it's like, no offense, but that shit is EASY. I mean, I don't fucking like to do ANYTHING and I write a fucking column now in two fucking places, a newspaper and this here splicetoday dot com, Jesus H. Motherfucking Christ, anybody can do this crap. If you write stuff and Get Paid, you have been on Easy Street, seriously, and now the Economy is getting HARD, so if you're out on the street, deal with that shit and look for a new line of work, OK?