The widespread use of digital TV signals next year will permanently end local cable access shows. That's our loss. 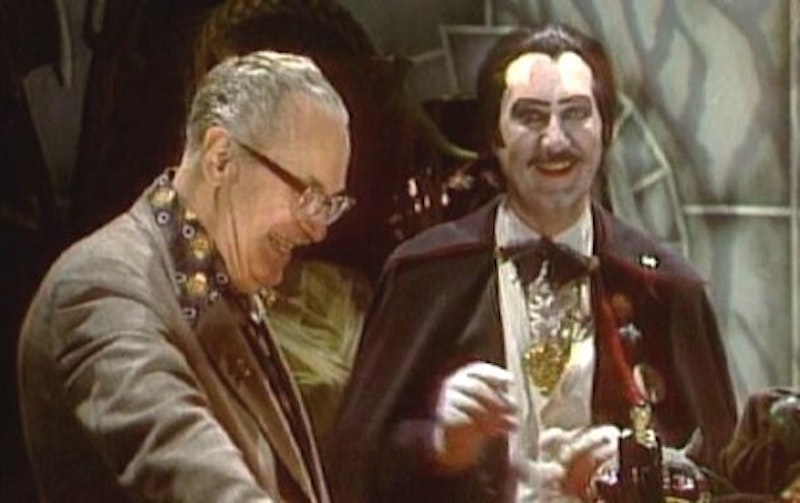 I was clicking through my new Direct TV system, trying to acquire a general notion of what stations were where on the 300-plus channels, when it hit me.

That is, count Gore de Vol, who was the vampire host of Creature Feature, the Saturday night horror movie that once aired in my hometown of Washington, D.C. Creature Feature, which aired on channel 20, the cheap, locally owned station, had production values that make the average YouTube video look like Pixar. The jokes Count Gore told were terrible. And more often than not, the movies were awful.

And yet, Creature Feature, which went off the air in 1987, had what I have not been able to find on any of my new 300 channels: hometown charm. Back in the days before satellite and cable TV—before iPods and even CDs—television stations would leave certain hours for “local programming,” shows about the politics, culture or sports of the home town. There were even entire television stations that were locally owned; they broadcast on UHF frequency, which will die once and for all when all television goes digital in 2009.

Unlike today's local programming, which is always about dull town council meetings, back in the days when there were fewer channels getting on television meant putting on a show. When I was a kid in the 1970s the local CBS affiliate, channel 9, broadcast "Redskins Sidelines" on Monday nights, a show about the previous days game by DC’s beloved professional football team. Channel 9’s ramshackle studio, "Broadcast House," named after the BBC, was next to the Dancing Crab, a beer and seafood joint, and on one occasion when Redskins running back John Riggins showed up in top hat and tails and well-lubricated, the hosts joked about him warming up before the show at the Dancing Crab. This was a far cry from both the multimillion-dollar production values of CSI and the dreary cable-access programming of town council forums deciding whether dogs can bark past 10 p.m. This was what Dick Dysel, Count Gore's alter ego, would later call it: "a little local theater." As the ability to get yourself in front of a lot of people has increased, the effort to create something special during that screen time has decreased. Anyone can buy a cheap camera and toss anything up on the Internet, and many do.


And yet, in the old UHF days there was a freedom that was even more expansive than YouTube, which has been known to spike political speech it disagrees with. It's hard to imagine any television station these days allowing the musing of a Petey Green. Green was Washington’s famous black activist and philosopher and the subject of the movie Talk to Me. In the 1970s Channel 20 gave Green his own show. He was hilarious and fearless, doing commentaries on local politics, drugs, prison, and perhaps most infamously, "How to Eat a Watermelon," a dissertation on enjoying said fruit that exploded stereotypes with its passionate demand that a person simply like what they like, and to hell with what anyone else thought—even if it might feed into a dumb stereotype.

Needless to say, "How to Eat a Watermelon" would not get within a mile of television—or magazines or movies—today. Political correctness would prevent it. But so would the fact that there is no longer the familial intimacy one used to feel seeing a local celebrity on a small local station. Petey could get away with it because he was one of us, despite the racial divide that separated—separates—Washington. We knew where Petey had grown up, gone to prison, and what station he broadcast from on the radio. My brother loved watching Petey Green’s Washington, and once my father overheard Green on the TV offering an almost-blue commentary about drugs and pimps. Dad hesitated for a second, wondering what it was, then smiled. "What’s that crazy Petey on about today?" he said. He was just one of us.

But my favorite was always Count Gore de Vol and Creature Feature. A vampire played by Channel 20 station manager Dick Dysel, Gore’s shtick was to mix sub-Vaudeville comedy sketches with quips about local politics. Occasionally he would toss in a few local guests, and they would often be people you knew. I still remember when count Gore had an anniversary show and one of the guests was the owner of Record Lords, a shop that was about five minutes from my house and where I went regularly. In the days before YouTube made everyone a star, there was an incredible thrill seeing someone you knew on TV, or getting on TV yourself. For a couple years in the mid-80s I worked at a movie theater that had been renovated to fit tables and chairs—think the Hofbrau House with a big screen—and for two years Creature Feature broadcast a live Halloween special from there. I had the bizarre and delightful experience of leaving for work on Halloween and telling my parents to make sure and turn on Channel 20 at eight o’clock to see me.


Count Gore is still around, with his own website. He sells best-of DVDs of the old Creature Feature. I bought the entire collection, and was not disappointed: the shows were just as bad as I remember. I was also delighted to see the old Halloween shows at the theater where I worked, including footage of people I used to know. Perhaps most striking was that the shows were, well, honest. These days, the only way a performer will acknowledge bad ratings is with Lettermanesque irony, a glib hey-we-suck insouciance. Dysel as Gore would often taunt his audience, comparing them to some of the brain-dead monsters in the films he showed. He never hid it when he inflicted a bomb on viewers. At the opening of his hosting of The Brain that Wouldn't Die, he tried to hold his coffin lid shut: "I'm not coming out!" he cried.

Count Gore managed to survive a severe beating in the ratings when Saturday Night Live came along, but he was forced to close shop when Channel 20 got new owners in 1987 and they cancelled all local TV programming. When stations make the switch to all digital next year, we will have pristine, high-def pictures. But somehow it will have less soul.