Why Halloween is the biggest conspiracy in America. 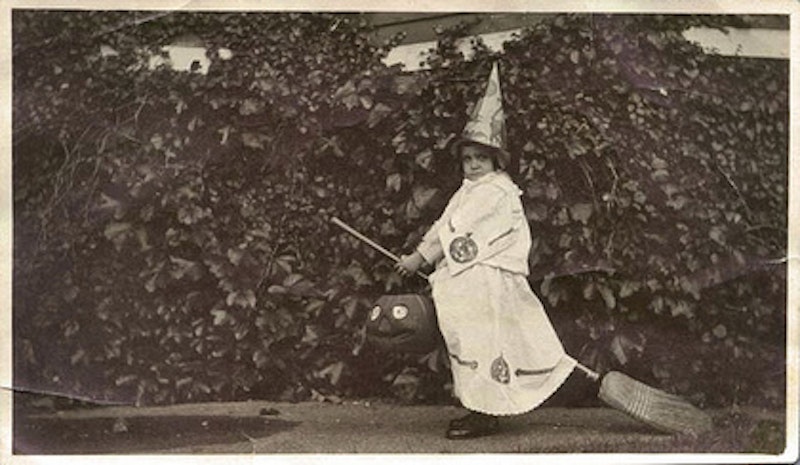 It’s finally coming to a close. Months of buildup, fanfare, buzz, and preparations will evaporate anti-climactically in a single day. Certainly, this was all getting a bit tiresome, a touch drawn-out, and I’m not sad to see it end. We’re talking, of course, about the endless charade that has become Halloween. What else could we possibly be talking about?

Yes, tomorrow is Halloween, that mildly beloved American pagan holiday that celebrates sluttiness, offensiveness, and Wisconsin-based alcohol-crazed rioting/revelry. Now, there’s nothing wrong with this, really. Good fun is good fun, and Halloween is a time for (mostly) good fun and maybe even a chance to show off your clever sense of humor with one of those costumes that makes strangers go, “Wow, cool.” (One year, I was the Hamburglar, and you better believe I got a bunch of “Wow, cool’s. It rocked).

Something lurks beneath the surface of this holiday, though, something that might be undermining our national fabric. To understand the problem, we need to take a stroll back to mid-August 2008. A pleasantly cool summer on the East Coast was coming to a pleasant finish. Football season right was right around the corner. Gas had eased down from early summer record-highs. The New York Metropolitans were leading the Philadelphia Phillies in the NL East. It was an exciting time to be alive.

Fast-forward a couple months. The Phillies are World Series champs. Gas has absolutely plummeted, over 80 cents cheaper per gallon by the last measurement. Michigan’s football season has already tanked. The economy has collapsed. Obama is killing in the polls. So much has changed since those unnaturally cool dog days of summer.

For some reason, though, people at supermarkets across the country—at least those in Maryland and Michigan—felt that the middle of August was the time to set aside swaths of their stores for Halloween-themed decorations, bulk candy sales, cheap costumes, gourds and squashes. Think about it: retail and food businesses devote nearly 20 percent of the year to the celebration of a single day. Halloween isn’t even the most important holiday of the year. It barely cracks the top 10. Here’s what I would consider the most important holidays of the year:

You better believe number 10 was almost Rosh Hashanah/Yom Kippur because they’re days off in some places, but there aren’t really movies/TV specials about those holidays. Chanukah is the token “Jewish Holiday that pretty much everyone knows about and considers an acceptable albeit silly alternative to a major Christian holiday for inclusion purposes.” Other honorable mentions that I think are a bigger deal than Halloween but realize I’m biased because I’m writing an article about how pointless Halloween is so I couldn’t really include them: MLK Day, President’s Day, Mother’s Day, Columbus Day, Leif Erikson Day, Boxing Day, Dia De Los Muertos, Bastille Day, Talk Like a Pirate Day, Take Your Teddy Bear to Work Day, and Tuesday.

Some of this, I guess I understand. It’s safe to say that based on empirical anecdotal evidence compiled by yours truly, Americans really love stretching out holidays. The period from mid-August until the end of the year is a nonstop celebration. If you happen to walk into the Ann Arbor Meijer, you will immediately see a massive Halloween aisle—which has been around in some form since before Labor Day—and if you make your way to the back right corner, you will find plastic Christmas trees and two aisles already devoted to Christmas. The transition is seamless. There may even be time to consider Thanksgiving.

If you add the month prepping for Valentine’s Day starting in mid-January, the two months of Easter, the two “Holiday weeks” of Labor and Memorial Days, well, that means we spend about eight out of 12 months a year getting ready for or celebrating holidays. That means that on any given day, there’s only about a 33 percent chance that you’re NOT in the midst of a holiday. This doesn’t include weekends, Holiday weekends, birthdays, anniversaries, and various one-day holidays—like the sort-of-extended St. Patrick’s Day or Cinco de Mayo season.

Yet, Halloween is still the outlier. Every other holiday celebration makes sense and is accompanied by a fairly appropriate celebration/decoration time frame. Yet, Halloween appears to be second only to Christmas in terms of length. Let’s break this down a little bit. Christmas is a very important religious holiday for the hegemonic national religion. Christmas is also the most important secular holiday, giving us two days off of work and school. Christmas is also the most important consumer holiday, it being the only holiday season where virtually everyone exchanges gifts (even if it’s done through sister holidays like Chanukah or Kwanzaa). Christmas also precedes the third-most important holiday by a week, is a time of intense travel and extended breaks from work or school, has a massive uniform decoration motif that millions of Americans utilize (the Christmas tree), and usually happens less than a month after the second-most important holiday. While I find it patently ridiculous to begin its celebration in October, I get Christmas. I mean, shoot, thousands of retail outlets across the country are made or broken by the holiday and bring on extra staff and extra hours just to accommodate.

One last look at the list up above to check for any irregularities that may help us figure out this quandary. Hmm, I guess New Year’s is a quirky holiday. It is purely secular, not family-oriented, contains no traditional meal, and really no profit-generating or culturally significant rituals besides drinking. Like, everyone over the age of the 14 gets drunk on New Year’s. And it shows: New Year’s kicks the year off right as the proud owner of the most drunk-driving fatalities.

New Year’s is the most prominent of what I would call the Drinking Days. These are the four holidays whose purpose is really just to get you fucked up: New Year’s, Halloween, St. Patrick’s Day, and Cinco de Mayo. I’m not counting Memorial/Labor Day or Fourth of July as those have other American significances and are more vacation-y holidays, with the summer beer-b-q taking center stage. And the beer-b-q should NEVER be confused with blatant binge drinking. They are different levels of alcoholism. On New Year’s, you’re probably driving—half-asleep no less—with a .23 BAC, but on the Fourth you’re more likely to be tipping the “one-too-many” .11 scales. You’re still a dangerous asshole for getting on the road, but there’s a good chance you can walk and complete sentences.

The reason New Year’s is so much more important than the other Drinking Days is twofold: universality and no work the next the day. The latter is self-explanatory, and the former is simple: your parents are drunk, your grandparents are drunk, you are drunk, your little brother is drunk, and New Year’s is the only day when this is guaranteed. St. Patty’s and Cinco de Mayo, while still recognizable holidays, are the domain of the powerful 18-34 age group, but your parents probably aren’t getting buck wild off green beer and high school students probably aren’t skipping classes to get douse themselves in Coronas and lime.

Halloween has managed to hoodwink the nation. It has—in its creepy, pseudo-ironic way—tricked everyone outside of the 18-34 age group that it is not a Drinking Day. And it has done so by appealing to the most dubious of our American sins: gluttony. Yes, a day that is sustained and made momentous by the partygoers in the world has ensured its success by tantalizing the youth with sweet, sweet candy. And with the youth comes the silence of their parents, not willing to deny their beautiful offspring a chance at this most American, most unhealthy of experiences. The conspiracy runs so deep there’s a Charlie Brown special about Halloween. Realizing the truth behind Halloween and its drunken orgy of revelry was like finding out there’s no Santa. To the children out there most likely not reading this column, good luck, one day you’ll see what this holiday really is, and I hope you’re sober enough to understand the implications. Happy Halloween.