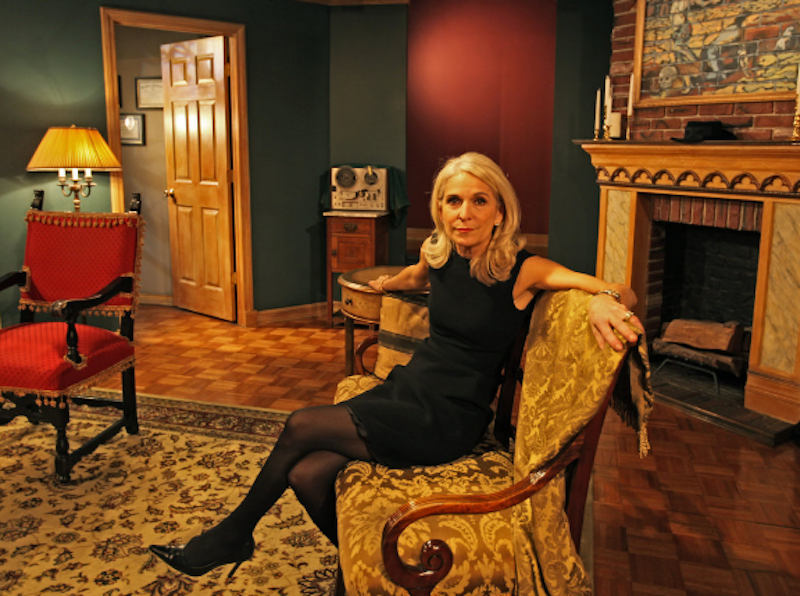 The psychological thriller Perfect Crime has been strangely shunted out of Manhattan's cultural memory. It hit its astonishing 29th anniversary last month having failed to wear a groove in the city's psyche. Tourists lured from the relatively close Times Square discount tickets booth dominate the audience; the natives seem to treat the pleasant fourth floor space on 50th St. and Broadway like an anthrax factory, or the local Conservative club.

On a recent sunny Wednesday afternoon there were no more than two dozen theatregoers in a space that could’ve held 10 times that many. Yet in a ruthlessly competitive cultural environment where even critically acclaimed productions flop every week, this one remains standing year after year, clinging lamprey-like to its pleasant, modest fourth floor location on the outskirts of Times Square and the city's consciousness.

The reasons for theatrical failure are often elusive, but in this case it's Perfect Crime's success that has the smart set flummoxed. Perfect Crime is not a foot-stomping crowd-pleaser like Shear Madness, which deals with the same themes in a vaudeville style. Though laced with dark humor, it's played straight. It's also willfully difficult and dense—I've seen it twice, read the script carefully, and still couldn't swear to all the ins and outs. It has neither natural appeal to lowbrows, who find it baffling, or to highbrows, who find it lazily acted. But the solution to the show's staying power (if not the play's actual mystery) is actually easily solved: the dedication of leading lady Catherine Russell.

Perfect Crime was penned by Warren Manzi, a writer and actor who died this year at 60. The show was his claim to fame. Even his New York Times obituary was centered around an interview with Russell, who has been with the show from the start and recently celebrated her 29th consecutive year in the role, over 11,000 performances night after night.

Backstage magazine in 2012 summed up Russell's achievement (to that point): "During its historic run—'Crime' opened four months before the Broadway long-run champ 'Phantom of the Opera'—Russell has shot 89 different men and kissed 57 others; more than 83,000 bullets have been fired onstage; 5,000-plus prop coffee cakes have been eaten; and the show has employed 237 actors." But only one lead.

Perfect Crime is often compared to Agatha Christie's The Mousetrap, which holds the world theatrical record for longevity, having played nonstop in London since its debut in 1952. Besides the age factor, the plays share a creaky and histrionic tone. Perfect Crime's plot is of shakier construction, but that's no shame; Christie was a formidable plotter. Mousetrap also received no respect upon its debut in 1952, but was grandmothered in over the years as Christie became a national treasure. Just as references to rations and ID cards were phased out of Mousetrap as World War II receded, today's version of Perfect Crime throws in ironic references to the lack of modern technology onstage but otherwise doesn't try to conform to a world of Internet, cellphones, and mean reviews at Yelp! and TripAdvisor.

By scriptwriter Manzi's own admission, he struggled with the plot for a year and a half, even as the show played every night. In the book version of the script he thanks people with sticking with him through the revisions, "when the script was too long, and too many people were confused." (Many theatergoers would argue that victory remains elusive.) The New York Business Journal relates that the original production ran close to three hours, but after feedback from critics Manzi trimmed the work to its current one hour and 50 minute length.

Perfect Crime's plot is indeed complex. Margaret Thorne Brent, a hard-nosed, straight-talking psychiatrist from Connecticut, may or may not have killed her husband, who may or may not even be dead. Her housekeeper and a former patient definitely are. It takes place in an increasingly archaic "present day," in the sitting room of a two-story house in a wealthy town in Connecticut, over the course of one week (with some violent bits off stage), Sunday night to Sunday night. The stage is tight and buzzing with timers and alarm clocks and Dictaphones and creepy reel-to-reel recordings.

Four characters on a single set suggests it's a cheap show to run, but it's Russell's willingness to tear tickets and plunge toilets that symbolizes the scrappiness that allows the show to scrape by in front of unpacked houses. Such a touchstone of stability in the pell-mell world of theater is a novelty. Never mind the snide Yelpers: "The real Perfect Crime was that they took my money for this horribly written play!" The bad reviews have acquired a dubious momentum of their own, often devolving into the picky, petty, or unreasonable (we were seated too close to the stage! the gunshots were too loud!).

Some fatigue and contemptible familiarity among the actors would be unsurprising, especially on Russell's part after performing nonstop six days a week for nearly 30 years. But on the afternoon I attended, all the roles came off rigorous and lively, with no yawning pauses or rushed deliveries.

And at least one member of the prestige press kind of liked it in those less cynical days when it made its debut. The original 1987 New York Times review by veteran critic D.J.R. Bruckner summed up the production as an interesting failure. Bruckner's highly mixed notice would in hindsight become the equivalent of a rave as the show became faintly risible over the years.

So, does Perfect Crime's underlying puzzle plot hold up? If you squint. If not, one can try to glue the pieces together via the answer sheet available in the lobby. The better question may be, do you like being surprised? I admired the way the jury-rigged mechanism actually managed to chug along under its own steam. As the screws tightened in Act II and the mystery of the surrealistic painting over the fireplace loomed, I entertained irreverent thoughts: If Tom Stoppard or David Mamet had dashed off something similar, would it be considered an intriguingly ambivalent entry into genre, instead of a confusing hour and a half of psychobabble?

—Clay Waters was editor-in-chief of Times Watch, a division of the Media Research Center, a conservative media watchdog group. His self-published mystery novel is Death in the Eye.