When JT LeRoy Was Fab

Documentary tells the story of one of history's great literary hoaxes. 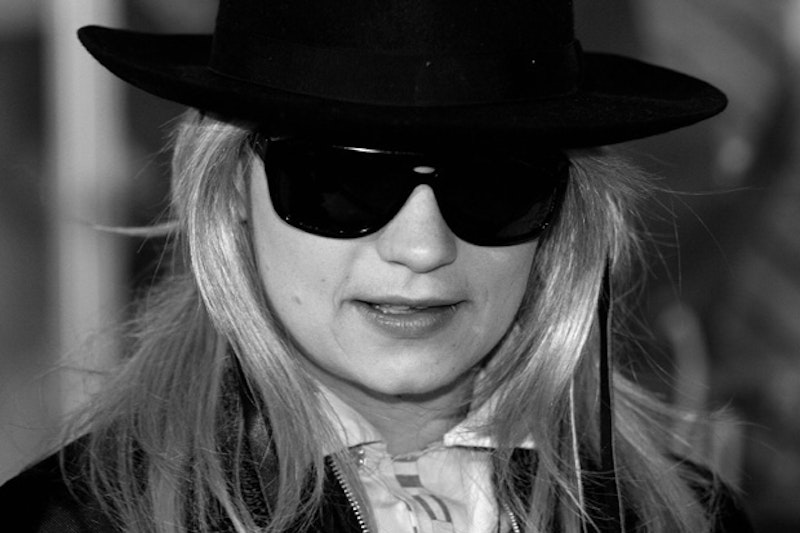 Author JT (Jeremiah "Terminator") LeRoy became a literary sensation in his early 20s when his best-sellers, Sarah and The Heart Is Deceitful Above All Things, were published back-to-back in 1999. The books, marketed as fiction, documented his real-life personal struggle in West Virginia as an HIV-positive, street hustling son of a truck stop prostitute who had him at age 14. LeRoy’s stories gripped readers with their gritty reality, authentic voice, and vivid storytelling.

Literary “it” boys are expected to do things like bookstore readings, but LeRoy was unwilling to even show his face in public. No problem. Plenty of celebrities, enamored with the prodigy’s work, were happy to volunteer as surrogate readers. Sometimes the author would sit anonymously among his fans at the readings and listen, as the documentary captures with some old footage.

JT would eventually decide to emerge from his anonymity, revealing himself to be a slender, girlish looking boy (he was getting a sex change, he said) with a cheap blond wig and outsize sunglasses. In the flesh, he became a sensation once again, traveling the globe and hobnobbing with the likes of Bono, Billy Corgan, Courtney Love, Eddie Vedder and Madonna.

But it was a scam. Jeff Feuerzeig’s documentary, Author: The JT LeRoy Story (just released on Amazon Prime) tells the story of one of history's greatest literary hoaxes. It opens with a clip of Winona Ryder gushing about LeRoy to a crowd of his fans, claiming she'd met him years ago, before the books were published. Then it cuts to NPR’s Terri Gross interviewing JT, asking why he kept his identity hidden. “Sometimes I like to go out as a girl, sometimes as a boy,” the author replied. “I never want someone to come up to me and say, 'I know what you really are’ and be in a position to hurt me.” Gross told the mysterious writer that some people said that he didn't really exist. That the phenomenon was an extended performance piece.

In fact, JT Leroy existed only in the fertile mind of thirtysomething Laura Victoria Albert, who'd decided to channel the persona of a much younger boy from West Virginia who’d long inhabited her mind. Albert herself had never walked the streets as a hustler. She was a Jewish girl from Brooklyn. The celebrated new literary voice who all the glitterati were so thrilled to be hanging out with was actually LeRoy’s twentysomething sister-in-law, Savannah Knoop, clad in a boy’s wardrobe with her breasts bound.

The documentary is anchored by a series of clips from an extended on-camera interview with the eccentrically dressed Albert. She's as talented at telling a story in person as she is on paper, so this works fine. In between these clips, the director places old home movies, telephone calls that Albert had recorded over many years, animation with voiceovers of the author reading her work, media footage, and on-camera interviews with various individuals.

An old home movie featuring Albert with her mother and father is used to evoke the abusive home environment she came from. At one point Albert became distraught and called a mental health hotline, pretending to be a boy. The counselor told her to start writing about the Terminator character inside her head. After years of writing, Albert began calling writers Bruce Benderson and Dennis Cooper in the soft, feminine voice of a boy with a Southern accent. Snippets of these recorded talks reveal the deception. Benderson and Cooper appear on-screen and attest to the thrill of discovery they'd felt. Astounded that a young street hustler could produce such original, accomplished work, they put her in contact with publishers. The 17-year-old author got a book deal. Sarah was released in 1999 to rave reviews, with The Heart Is Deceitful Above All Things following. Feuerzeig inserts a recording of Tom Waits calling LeRoy/Albert to rave about the books. The JT LeRoy phenomenon had begun, and the reclusiveness just added to the buzz.

Albert explains that a German media outlet wanted to do an on-camera interview with JT.  Discussing it with her sister-in-law, she realized Savannah had the right features to play the role. Albert gave her $50 for the gig, thinking it was a one-off, but the charade was to continue for another six years. The actual author would be right by her side for all of those years, playing her own role. She became JT’s manager, “Speedie,” an outrageous character with an often odd-sounding British accent.

With the pieces all in place and Knoop occupying the spotlight, the film really takes off. Savannah's JT dominates the screen. She's the star now. Albert describes how she'd spend many hours talking to director Gus Van Sant on the phone in preparation for the film version of Sarah he wanted to make, but when the actual meeting was to take place, she had to figure out how to prepare Savannah for it. Van Sant had brought actor Michael Pitt along, and at one point he (who Albert describes as “not gay”) and JT/Savannah began making out, which Feuerzeig documents with a photograph. Later, when Italian actress Asia Argento decided to do a film version of The Heart Is Deceitful Above All Things, she had an affair with JT/Savannah during the shoot. Savannah had stumbled into the weirdest job ever, but she was a natural, and she sure seemed to be enjoying herself.

Albert is really on her game when she describes JT’s meeting with Bono after they'd been granted backstage passes. U2’s rock star “ushered her into the portal” with what she called “The Bono talk.” JT was officially in the inner sanctum then. Albert, as Speedie, then got “the manager talk” from U2 manager Paul McGuinness.

The house of cards finally collapsed, of course. An old photo of Savannah Knoop in a San Francisco clothing store began circulating, and soon the gig was up. Laura Albert handed an extraordinary amount of self-documentation to Jeff Feuerzeig, which he used to make a compulsively watchable documentary. Albert is the quintessential unreliable narrator, but she sure can tell a story. Who knows what she made up or left out here, but this film vividly brings to life one of the greatest literary intrigues of all time.