And so is Tomi Lahren. 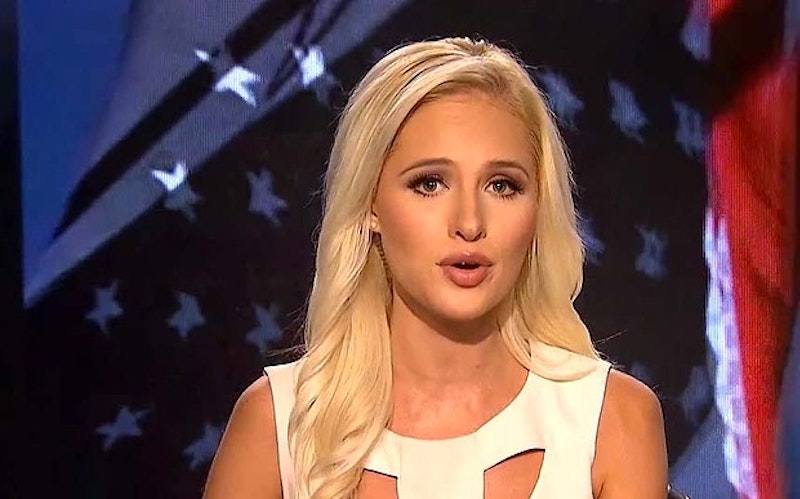 Beyoncé recently announced to the world she is pregnant with twins. Social media rejoiced and Beyoncé’s online news post became a Guinness World Record with the most number of “likes” (1.4 million) in 30 minutes.

Gushing words of congratulations came from celebrities hoping to cash in, such as fellow diva Rihanna and model Chrissy Teigen. Even the pompous Piers Morgan proclaimed the news “happy” and offered his congrats (as if Beyoncé really cares).

The BBC announced Beyoncé was “[celebrating] motherhood” by releasing a series of portraits that highlighted her burgeoning belly. The singer captioned one of the photos, “I have three hearts,” acknowledging the things inside her causing her stomach to grow are, in fact, not mere blobs of tissue.

This is the same Beyoncé who rallied support for Hillary Clinton and is so proud of her cozy relationship with the Obamas. Rihanna, too, even though she can’t legally vote, paraded her endorsement of Hillary on a T-shirt. And Chrissy Teigen did nothing for the last six months of 2016 but wield sharp words on social media in defense of Hillary and in support of Planned Parenthood. Piers Morgan has been spewing left-wing rhetoric on TV shows no one watches and in inane articles.

What if Beyoncé made another announcement—that she was un-celebrating motherhood and “exercising her reproductive rights” by terminating her pregnancy, in the fashion Rihanna, Teigen, Hillary, Morgan, the Obamas, and Beyoncé profess is so empowering? Teigen is a mother to a newborn daughter, yet apparently believes having three hearts inside a person is great until that person decides she wants to get rid of two of them.

That the Hollywood elite is comprised of a bunch of self-important, brainless liberals with a hypocritical, mob mentality is not news, least of all Tomi Lahren. Lahren is TheBlaze TV’s female, “conservative” version of Chris Matthews, known on the Internet for angry, mid-rant screenshots of her frowning face and for reading unoriginal talking points off a teleprompter. Lahren has attacked pretty much anyone, but usually is agitated over the contradictions of celebrities.

I’d like to cheer Lahren on and say, “Go get ‘em, girl!” but I’d rather not be associated with “Team Tomi,” and not just because she’s giving conservatives everywhere a bad name, perpetuating the “angry conservative girl” stereotype—a label she herself proudly embraces. Lahren has made a name for herself by spouting off emotional one-liners in response to trifling news items that don’t deserve attention. When Lahren ranted about Colin Kaepernick’s National Anthem protest, Rare’s Matthew Purple expressed what everyone was, or should’ve been thinking:

Why does anyone need to spew bile at one QB hugging the bench during the anthem, when league players are more than two thirds black and almost all of them stand when they’re supposed to, many with hands on hearts, some with tears in eyes? Who hears about a mildly dumb demonstration by a quarterback who as of now isn’t even starting this season, and not only feels uncontrollably angry, but goes home and writes an entire rant about it, and then somehow sustains her fury through her show’s closing statement? Kaepernick is one aberration in a patriotic league, not an official emissary from the black community. Who the hell cares? And who’s going to have his mind changed by someone as uncomfortably indignant as Lahren?

Lahren uses profanity and peppers her monologues with such expressions as “holy crap” and “mouth diarrhea.” She is, as Purple put it, “emblematic of too many conservatives, who sit around and wait for a pretext to be outraged so they can spit dilophosaur venom at the camera.”

It bothers me that Lahren is a rash, crass provocateur, that she’s inappropriately irate, blowing news stories out of proportion like the Chicken Little of Clickbait. It irks me that her statements lack substance and any semblance of intellectualism, devoid of any convincing charm, humor, or genius found in the likes of a clever Ann Coulter, an earnest and fun Tucker Carlson, or a witty William F. Buckley.

I fear Lahren’s influence may do actual harm to those who associate what she says with conservatism. Lahren’s a hypocrite. Her conservative values run about as deep as her platinum blonde hair. She declares, “faith, family, and freedom” as the cornerstones of her Twitter account, and presumably also her life. She denounces the Hollywood elite as hypocrites, yet tells the Daily Caller in an interview, “I always say I don’t care what you do, I just don’t want to pay for it. So I describe myself as fiscally conservative socially moderate and I will stick by that… Abortion is not one of those issues that is most important to me. I’m not one of those pro-lifers that is so adamant in their beliefs.”

Lahren has no right to profess such adamant concern for the lives of born people if she doesn’t care about the lives of the unborn ones. Fr. Frank Pavone reminded us of the enduring urgency of the pro-life movement during the most recent election cycle:

The fact that abortion is indeed the moral issue that must hold the strongest sway on our conscience and on our voting decision is just as true today as it ever was. Nothing has changed or weakened the basis for this assertion. In particular, three things have not changed: the math, the logic, and the teaching.

It remains true that nothing in our country or in the world claims more human lives than abortion. Even with the declining number of abortions in the United States, we still have over a million each year. Consider how that compares with other causes of death.

If the government takes away the right to life of the child in the womb, and that child is then killed by abortion, you have also taken away from that child her right to education, work, family, health care, protection from terrorism, and every other right or good she could possess in this life.

Moreover, in claiming to be able to take away that right to life from certain human beings, the government then puts on a shaky and questionable foundation its advocacy for these other rights.

In an effort to follow my own advice: “If you don’t have anything nice to say, at least make it constructive,” I’ll end by saying this to Tomi Lahren: First, calm down. Second, make ending abortion something that riles you to hysterics. You have a platform; use it to call attention to the really dangerous issue threatening our culture. There’s not a single policy or crazed Hollywood liberal that should make you angrier than the legal murder of innocent children in your own country, whether you have to pay for it or not.