His new Netflix special is proof. 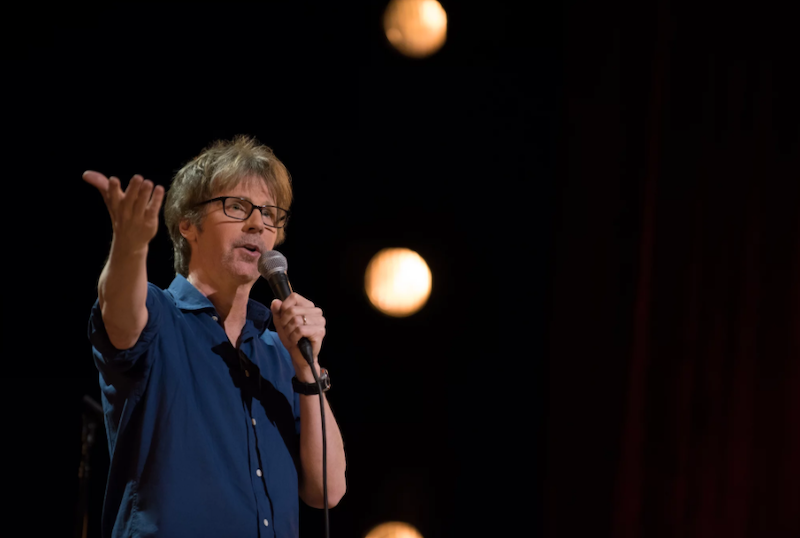 How old is Dana Carvey? Dana Carvey: Straight White Male, 60, says his Netflix special. Well, that’s him sorted out (though by now he’s 61). “Those darn kids” makes up a large part of Carvey’s set, and he puts on a ripe “I don’t care” display regarding trans-genderism: “I personally don’t care what anyone does. Transgender, gay—I don’t care what anyone wants to do. I mean, I have a friend who’s trans-bestial, he’s becoming a cat. I don’t care.” Buddy, you care. That’s why your voice is so tight. Carvey’s show seems like everything a golf dad has to say that doesn’t have to do with golf. All his other subjects are gathered here: that snotty teen, TV documentaries, the Beatles, marriage (“Even in the best marriage, at one point you look over and go ‘Not my best choice’”). Carvey makes most of it funny. Yes, some of the material sounds like it’s been around a while, but the bits and characters keep coming. And it’s good to see a performer so limber at this date in his life. Still, the material’s range is what it is.

Carvey’s funniest bit is about Third World working conditions, via a documentary that was possibly viewed in his den. The people always sound so depressed, he marvels. Possibly he might wonder why, but he doesn’t. On the other hand, he spots and makes good use of the one funny thing in that dim situation. The translator, on voice-over, doesn’t know what to do with the worker’s depression. The translator feels bound to convey it but has no training or talent for doing so. The result is that the translated voice-over develops curiously flat, extended vowels at the moments when depression must be conveyed. Carvey imitates this: “We make iPhone screens, that’s aall we maaake.” He turns the trait into a running joke, bringing back variations of the line. Nice job, within its limits.

Voice man. Change and growth, stretching limits, aren’t what Carvey’s about. Back on Saturday Night Live he showed an above-average gift for character but a certain over-optimism regarding his celebrity impersonations. After a quarter century he still does. The angry-teenage-boy walk in his new show is fine work, and so is his helpless-dependent-college-boy voice (“Umm, I’m not really good at calling landlords?”). Meanwhile, his Trump veers into Lorne Michaels, his Obama into Tom Brokaw, and his Bill Clinton into Paul Lynde (“all right, peaches and creeeam”). His Bernie Sanders is darn good, as were his Ross Perot and George Bush back in the day. His Italian accent is firm but crude, his Irish accent non-existent, his Apple Store accent (this is a new category) gayish and German but with fugitive overtones of Boris Karloff. Carvey’s Chinese comedian imitating Trump is admittedly good work.

Back to demographics. Some late arrivals find their seats and Carvey razzes them for being young. “Millennials,” he announces. He compliments the woman in the group on her youth and beauty. There follow his candid thoughts about marriage. “I don’t want to bum you out, but it’s true,” he says when done, adding, “I’m heavily medicated right now.” This leads into a well-acted though standard bit about embarrassing moments at the pharmacy. But observe the lead-in. That’s the voice of battered middle age.

On the other hand, Carvey may bristle at individual kids (his sons) and at their cohort (“Millennials”), but he knows who Kanye is and he feels about him as many Millennials do: that the man’s an ass, but that there’s no sacrilege in McCartney-Kanye succeeding Lennon-McCartney. “Well, it’s not that heavy,” Carvey says when some audience members boo the thought. He continues with a routine about Paul McCartney explaining the Kardashians, selfies and Facebook to John Lennon. His McCartney is one of Carvey’s better bits, not just a voice but a character (“In the future everyone has a baby television in their pocket,” “And I sat down for a plunketty-doo, you know, and he started hummy-talking-singing”). His Lennon, on the other hand, is a kazoo. But note the common ground on display. Everyone, old and young, has a laugh at the Kardashians, and Carvey doesn’t get at Kanye’s music-making—no “these kids and their crazy music.

Carvey lets drop some other thoughts. “Science won’t let us die,” he says at one point. He fiddles with his iPhone and says, “I think we’re being hypnotized into darkness with these machines, you know.” The comments appear to be asides, things he can’t help saying, as opposed to things he must say for a bit to work. I submit them as evidence of our times and I add this: now that boomers are senior citizens, everyone curses. Carvey’s teenage son does (“bunchafuckenbullshit”) and so does Carvey’s impatient old dad (“You don’t know shit”). So does Carvey. “I don’t give a fuck about Benjamin!” he shouts in a bit about baby pictures. Cursing used to be a marker between young and old. Now the marker’s gone. And everybody knows about the Kardashians and their resplendent rear ends, and a comedy vet does a good bit about depressed Third Worlders making cheap consumer electronics. Dana Carvey’s been alive 60 years (well, 61) and this is where we are.