Racism Won at the Grammys

It's time to change the system. 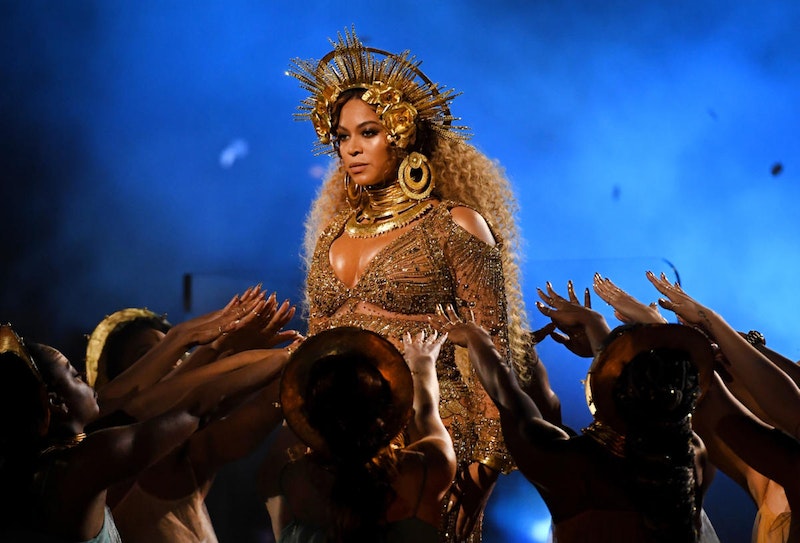 I held an emergency screening of Beyoncé’s Lemonade at my place in East London (with a talk back!) in April the second the album dropped. The screening was not so much to watch the movie as it was to create a space for black people to come together to sew our scalps back in. Lemonade is, as far as I’m concerned, Beyoncé’s best record, visually, musically, and conceptually. At the time, the album felt so much like a magnum opus that I wouldn’t be at all surprised if it was her last pump through the building, or at least her last record for a very long time.

With nine nominations at the 2017 Grammys, including one for Best Music Film, Beyoncé rolled up to the ceremony as one of the most nominated artist of all time, the artist with the most nominations that night, twins, a headpiece, and a show stopping performance—just a typical day at Beyoncé LTD.

But when she was beat by Adele, winning only two out of nine nominations, one for Best Urban Contemporary Album, the black category, and the other for Best Music Video for “Formation,” it was clear that racism shut her out yet again. Racism is why she didn’t win, and has never won, Album or Record of the Year. At The New York Times, Jon Caramanica likened the Grammys to a border, with a primary interest in protecting white artists doing black music, an age-old tale in the history of pop music. Even Adele asked, “What the fuck does Beyoncé have to do to win Album of the Year?”

Beyoncé does not need one more damn Grammy! Not because she doesn’t deserve them and certainly not because she already has 22 of the damn things. The truth is that her talents and contributions are way above some dumb award that we know only rewards white people, so everybody just chill out. Beyoncé, like Frank Ocean, is above the Grammys, and we shouldn’t let a committee of aging white male voters judge the value of blackness, of black-produced art and creativity, certainly not right now, not in Trump’s America.

Nowadays, most artists blow up over a period of time and then flame out while other artists emerge on the scene and become the next hot thing, older artists struggling to keep up. It’s part of the capitalist machine—newer, younger, better, hotter! For the record, Beyoncé has been around since 1998. Mase, Montell Jordan, Mariah Carey, and something called Hanson were also popular in 1998. Where are these people now?

As an artist, Beyoncé enjoys a perch that few others reach in their lifetime: so iconic she no longer needs the radio, hit singles, or awards to maintain relevance. Beyoncé is relevance. With a click of a button she can drop the most liked Instagram photo of all time. The world stops and collects itself when she announces a new project, whatever it is, even if it’s a liquid. When she drops a music video we know the looks, the hair, and the choreography will be snatched, and when we see her perform we know we will need help breathing afterwards, learning the choreography overnight.

Let the 2017 Grammy snub be a call for a more independent Beyoncé, a Beyoncé that does exactly what she wants without regard to the market, the radio, or the award season. She rarely gives interviews, which only adds to her aura, so why doesn’t she withhold herself from the awards, too? Sure, it’s nice PR to promote an album as GRAMMY AWARD WINNING, in all caps, but Beyoncé is PR. Beyoncé is already all of the awards, she doesn’t need more.

There is, of course, the broader problem of black people’s work not being valued within capitalism, and black women’s labor in particular, and I’m floored that the Grammys didn’t learn one thing from #OscarsSoWhite. I’m floored that white artists are still winning over black artists. No matter how many essays emerge about the erasure of black people from the most visible media platforms, from television and film to the DJ booth and the catwalk, nothing changes.

If the system won’t change then we have to come up with whole new ways to create the change we want to see. Withholding ourselves is one of the most powerful tools.