Under the Big Top in Austin, TX

Some notes on a recent trip to the circus. 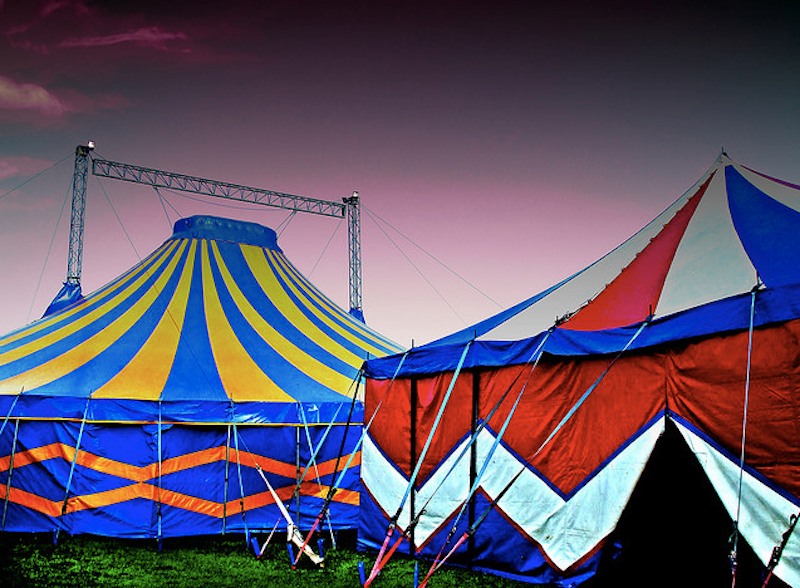 Icy rain, lashing winds, and the threat of pneumonia combined weren’t enough to convince a small, determined band of animal-rights protesters to sleep in or invest in a makeshift tent. If you’re going to dedicate your lives to saving the world, make sure you’re well-equipped enough to be able to continue to live there.

No lions, some tigers, no bears, plus at least one foundation-caked cougar who’s more than old enough to know better.

Lots of impeccably-trained elephants and dogs, though, and all-business Hispanic dudes in black dashing to and fro, nimbly scooping up animal shit and shifting props and hustling hard and generally just making me glad I wasn’t one of them, because this was just their first of three shows that day, which was the first day of a three-day, three-show-per-day stand.

Among the concession items on up-in-your-grill hawk were light sword toys of many varieties, one of which looked like a double-ended take on the classic Star Wars light saber, and many times during the circus, as a never-ending procession of dudes pushing Slurpees and cotton candy and fake light sabers hollered by, disrupting our enjoyment and our photographs, I found myself wishing a Jedi wannabe would a) emerge with a real light saber and b) take these pre-adolescent enablers out without comment or ceremony.

I also despise people who relate everything (or anything) to the Star Wars mythos—so it follows that I hate myself, despise myself.

What’s interesting to me is how much more fascinating and fantastic the circus seems from an adult perspective, at least compared to what I remember of the whole childhood Barnum & Bailey adventure. Perhaps it’s because I’m better able to appreciate the lengths to which the performers—the acrobats, the dancers, the BMX trickster, the Evel Knievel wannabe, the animal trainers, the main clown, even the marginally-talented eye candy—probably went to make it here, to this level, to perform for us. When you’re a kid, it’s easy to take everything for granted, because you don’t know any better. Elephants dancing and sitting thoughtfully on stools? A ruddy guy allowing himself to be fired out of a cannon, just barely making it into the net? A former gymnast rappelling up a velvet curtain into a rapidly circulating moon and contorting herself around at 40 feet off the ground?

Early on, the Master of Ceremonies outed himself as a former Elvis impersonator. Then he sang a bunch of Elvis songs that everyone knows, one to a deeply embarrassed girl who was celebrating her 13th birthday and who, upon arriving back home later, probably slaughtered her folks for the pre-planned humiliation.

If you’re keeping score at home, this article concerns the Austin Shriner’s Circus; Shriners are elderly, kindly gentlemen who sport red, blinged-out fezzes and are big into charity.

When planning a family trip to the circus—browsing seats on Ticketmaster, say—the temptation to secure front-row tickets may prove tantalizing, almost irresistible. I urge you to resist. Upside: you are up front, at the edge of at least one of the proverbial three rings, resulting in awesome photographic opportunities. Downside: ditto, which is to say that inches will separate you from taut, quivering support cables, scaffolding sections in piles, parading families and stage hands, robed performers, domesticated wildlife in droves.

For real? Between tickets, programs, concessions, and parking, the experience was as financially prohibitive as it was ultimately experientially rewarding for the fam and me. At home, we pick up after ourselves, and it was no different with this venue—as the U.S.A.-themed finale wound down and a psychic field of nervous energy built around us, we collected our accumulate hotdog crusts, aluminum foil wrapping, inedible bits of pretzel, and other trash. And as the lights rose, and as the masses made myopically for the exits, we were startled to discover ourselves alone in this way of thinking—very much alone.