The Rage Against Daniel Eatock

Hipsters can be so cruel. 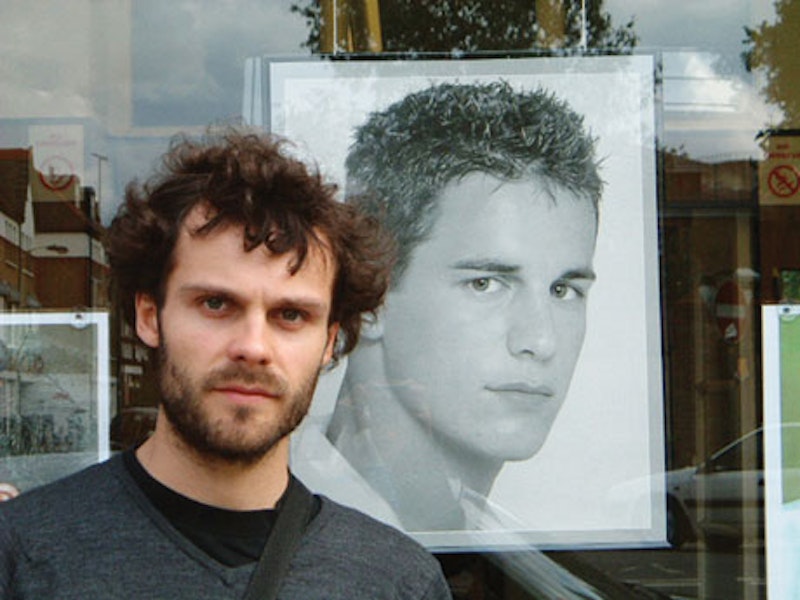 I have absolutely no problem with Daniel Eatock. I actually find his simple, occasionally ironic compositions refreshing in an art climate where complex pop surrealist imagery is rising. You can only see so many creatures with exaggerated, differently sized eyes, or juvenile characters in feet pajamas, standing static in bleak landscapes that try, and horribly fail, to compare themselves to the Mona Lisa and have four different, inappropriate light sources.

Instead, Eatock works with color, form and value—which might seem like some pretty basic art junk right there, but art as art object is something that’s often ignored in the realm of pop surrealism and graffiti is king. As the whole genre blossoms, decays, and attracts parasitic artists who hope to capitalize by mimicking it, it’s become too obvious that the DIY nature of the form is polluted by plenty of people who simply don’t realize that they can’t actually Do It Themselves. People who fancy themselves savants are simply idiots. Someone sees Art Brut and decides that they can be Art Lazy, and it’s downhill from there. Thankfully, a handful of genuinely talented visual artists keep the whole form alive, because as much as I hate it, I also love it.

When you’re spraying an image across an enormous, stationary wall, you’re doing it for the love of art, and probably, yourself. Graffiti is ostensibly about the beauty of art in an unexpected public space and fighting for urban beautification, but also about declaring how awesome you are, rap battle style, for everyone to see. You’re not going to earn money from graffiti (and you might end up paying fines for creating it), but you just might build up your cred enough to become an entity that’s inherently profitable. It’s a little ironic that the street art scene is so closely tied to pop surrealism, and subsequently, the urban vinyl art scene in which small, plastic, manufactured pieces are often sold for hundreds of dollars. I’m not going to play guilt-by-association, though. Ultimately, most art is about building up enough momentum to create art for a comfortable income, so you can’t fault anyone for turning art into cash.

The pop surrealism crowd is allergic to the conceptual. In a way, the pop surrealist (or lowbrow) art scene is a reaction to the increasing ridiculousness of the conceptual scene. Paintings extracted from the id are more easily accessible than any bizarre performance that tangentially refers to some obscure concept, but they’re rarely as rewarding. When Juxtapoz Magazine’s blog posted art by Daniel Eatock, the hipsters revolted.

Eatock’s Spray Can Sprayed With Its Own Contents is a simple piece in which a spray can was directed at a fan and had its content redirected. It’s a subtle study in utility, the purpose of an object, and its appearance in relation to what it does. It’s an incredibly minor piece in a huge array of visual works by Eatock. Unfortunately, the hipster street art crowd have appropriated the spray can as a phallic symbol of their self-important “art movement,” so you currently need to meet approval by the Ironically Cool People Board of Appeals before you’re allowed to use the spray can itself in art, lest the natives begin foam all over their their lip rings. Juxtapoz posted this artwork, presumably, because of its loose associations with street art culture, which exists at the core of its readership, even though it doesn’t adhere to its typical genre explorations.

Frank B.: “That works with piss too, Can I piss on myself [...] so I can be like everyone else? ‘The Man That Pisses Himself’ WINNER lol”

William G.: “They used to call themselves low brow and never featured conceptual art. That was the appeal. The magazine gets worse every issue and giving exposure to silly shit like this and encouraging more of it is just sad.”

It’s worth mentioning that William G.’s profile image is a painting of a lopsided Native American of which he is obviously very proud. Represent, Pacific Northwest College of Art!

Juxtapoz might not be the right venue for Eatock’s conceptual art, but the vitriol which his art was met with is surprising. For a genre that so openly embraces the psychology of art, its audience just isn’t ready to explore the nature of art. If it doesn’t reference WWII-era pin-up girl tattoos, it’s an offense to all art. Apparently. Art criticism is always necessary, because it gives birth to new and better ideas, and prevents creations from needlessly repeating what’s already been done, but it would be nice if these things weren’t laced with profanity and ignorance.

When creating art, there always will be tensions between the visual and the intellectual, and they’ll always exist in different amounts. If something is visually interesting enough, it will inherently stimulate something intellectual, but if something is extremely intellectual, it might not have a lot of visual appeal. Establishing this balance, or exploiting the imbalance, is where good art exists.

And if you’re upsetting someone with it, you’ve won.