This radical, deceptive show, the greatest study of emptiness on television, doesn’t let any of the debris go to waste. 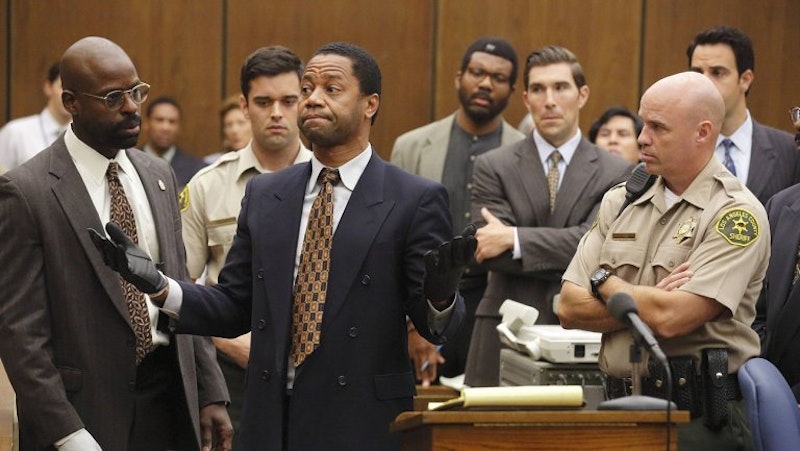 The other night, as I was going to sleep, I suddenly decided to make my entire body as motionless as possible. Once I’d done this, with my eyes closed, I started carefully moving the muscles in my face—starting with the little sheaf of muscle just underneath the cheekbones. I tensed it, skeptically. I sucked in my cheeks as if amused. I squinted, slightly, and set my jaw, as if offended. By any standard, I was behaving strangely, and the fact that I was alone in the dark was hardly an excuse. Who was to blame for all this? John Travolta.

Travolta plays Robert Shapiro in The People vs. O.J. Simpson, which is the first season of American Crime Story. Travolta’s a producer on the show, and perhaps he cast himself; whoever did it, the fit is spectacular. Over time, Travolta has gradually acquired a huge, sunken, almost expressionless visage. It isn’t chiseled anymore; instead, his face seems frosted over. One immediately suspects Botox. Travolta doesn’t really smile or frown, although at rest, he radiates a kind of cavernous menace. All the actor does now, with his face, is adjust it. He finds a kindred spirit in Shapiro, casting him as a man so completely in thrall to his own estimation of himself that he’s forgotten how to have real, unimproved emotions. Shapiro’s paralyzed by condescension. He speaks like a stroke survivor, some words blurrier than others. At first, he weathers the absurdities of representing O.J. Simpson without showing any strain. Nicole Brown Simpson’s murder, however, is a cesspool, and Shapiro succumbs to it. Every new, sordid turn is written out in longhand on his gigantic, subtle, writhing face.

What’s pleasurable about the show is that Shapiro really isn’t worth it, from a certain artistic standpoint. He’s not sympathetic. He isn’t a villain, either—at one point, Shapiro bemoans being cast as one in the media, and we find ourselves agreeing with him. There’s a scene, a few episodes in, where Shapiro does nothing but drive home. Instead of tuning into the news, he’s listening to some anonymous, terrible light jazz. That’s the whole scene: how out-of-it this lawyer is, how complacent, and how burnished is the little world he’s living in. It’s as if the writers and creators realized, as they began working on retelling this saga, that this immoral, unresolved tale gave them unlimited freedom. After all, O.J. is obviously guilty. His exoneration, now a historical fact, is nonetheless absurd. Since this is a true-crime series, it can’t deviate from what happened. The plot quickly becomes a bad joke, forcing our attention elsewhere. That’s the secret charm of American Crime Story. It exploits famous events to depict people at their most ordinary.

Take David Schwimmer’s character, Robert Kardashian. At the point when O.J. goes on trial for murder, the Kardashians aren’t famous. It’s a running joke, whenever they’re on screen, that someday they all will be—but that’s really beside the point. Robert Kardashian, as channeled by Schwimmer, is one of those basically decent, affectionate people who happens to be rich, with a pompadour, and one ugly divorce already on the books. The pompadour is never mentioned, explained, or played for cheap laughs. It’s just there, as if somebody ordered him to get one. Kardashian isn’t vain, but he’s such a conformist that he consents to act vain, like everyone does in Los Angeles if they can afford it. He’s one of those guys who can go out to a club, do a ton of coke, and still end the night with his innocence intact. Kardashian gets up the next morning, takes his kids to a family restaurant, and lectures them on the shallow, hollow nature of money and fame, without once suspecting himself of hypocrisy.

Again, this is the stuff of bathos. Kardashian isn’t Prince Hamlet, nor was meant to be, and that’s precisely the challenge Schwimmer accepted when he chose the role. Every actor in American Crime Story has to ask how their character lives with himself. They’re not breathing life into a few black-and-white lines of dialogue; they’re trying to triumph over the endless newsreels showing these greedy, dishonest people spouting banalities and wearing bland expressions. Along the way, there’s an idea that begins as a whisper, a gut feeling. Slowly, this idea grows and deepens into something dreadful and profound.

It shouldn’t matter so much, to all of us, what O.J. Simpson can do on a football field, even if most other people can’t equal him. O.J. shouldn’t be relevant after he’s retired and already finished with his second career as a bad actor. On the other hand, without O.J. and the other celebrities like him, we’d have nowhere to point all our cameras. Therefore we do know every stupid little thing that happened after his ex-wife Nicole and her friend Ron were murdered.

Gathered into a pile, the facts and footage want very badly to mean nothing. They don’t cohere. As it turns out, they don’t need to. This radical, deceptive show, the greatest study of emptiness on television, doesn’t let any of the debris go to waste. After you watch it, you end up lying awake in bed, adjusting the expression on your face, for all the world as if Robert Shapiro actually mattered—which, like all of us, he does.