No—the world is our rage room, and you are our targets. 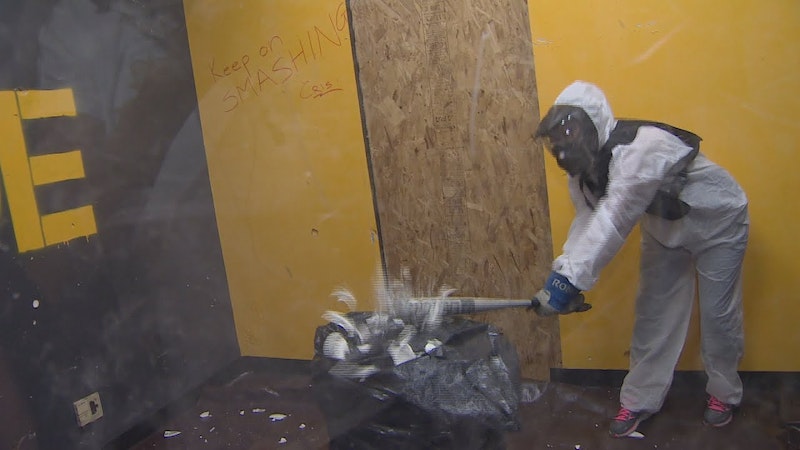 The other day, my editor/translator/NA sponsor Nicky Smith sent me a first-class package. Of course I expected a check, because I can’t remember the last time my husband, cunt cousin Bennington or I have been paid for our work published on Splice Today. Nevertheless, we persist, because we must squawk. That package did include some money, but all cash, loose bills crumpled up and wet with… something. It wasn’t much, in fact simply an advance for a story where I’d go down to Baltimore (ew) to investigate their popular “rage rooms,” spaces that used to be arcades and shooting ranges converted into rooms where rich white women can pay hundreds of dollars to smash electronics, furniture, and personal effects.

They provide the weapons: sledgehammers, axes, baseball bats. This is supposed to be fun, a regulated and safe means by which the petit-bourgeoisie can relieve their frustrations and fantasies of violence against bad men. Nicky assumed I would “have something to say about this… given your history.” Excuse me? I’m happily married, bitch. Rooster and I are in love and always will be. You are petty because you are mean and you are mean because you are jealous.

The cover story of the April 18 issue of Wknd, Baltimore’s hottest pamphlet, is called “Smashing Good Time.” Missed opportunity for a Smashing Pumpkins pun (Nicky made me include this, and I do it under severe protest—do not trust that man). E.B. Furgurson III (the fuck kind of blueblood bullshit name is that? Go work in a factory, bitch) writes, “Some come to [the rage room] to celebrate or vent after relationships go sour. ‘One lady was engaged but then they broke up. So she brought in engagement pictures and demolished them… Another woman brought things in from her house after a divorce, some of her ex-husband’s stuff and broke it up. That’s some revenge.’”

How pathetic these people are. Whatever happened to taking an axe to your ex-husband’s face? This, I’ve found, is a much more effective method of exacting revenge. You also get exercise and the natural rush of adrenaline without needing to seek out illegal dopaminergic street drugs (I’m also a pharmacist, but due to various bureaucratic issues, I’m not currently practicing). Furgurson III (change your name, bitch) also interviewed a psychologist in Annapolis to get an opposing point of view: “If it is a novelty thing, a fun thing done as a lark, perhaps. But it is not helpful therapy… It can reinforce rage behaviors… It’s physical violence against inanimate objects. It’s psychologically counter-productive.”

Counterpoint: me. I regularly use physical violence against objects, both inanimate and alive, in order to feel better. It’s called self-care. Get used to it. Secondly, the earth is a cruel mistress for a “chicken” like me. People try to pet me; I bite them. People try to fry me; I scratch them. People try to find my credit card information and drain my bank account; I go to their house and murder them in their sleep. Just kidding about that last one, it’s not murder of course, just self-defense.

Why spend money on a rage room when you can destroy a room in your own house? Some people have home studios, why not rage rooms? How about your husband’s office? That’s my favorite rage room. If you have kids, perhaps their room? Builds character, after all. At least that’s how I was raised…

So no, Nicky—I will not be coming down to your muggy, corrupt city to pay for something I regularly do in my own home. Have fun with your absentee mayor and your poisonous harbor. Must be fun living down there with all the flamingos and homicide. Up here in New England we don’t have either. Maybe you should come visit us for a change. You might learn something new. Just remember to wear a flak jacket.