FTL, Y’all is a strong collection, testimony to the amount of talent emerging in comics. 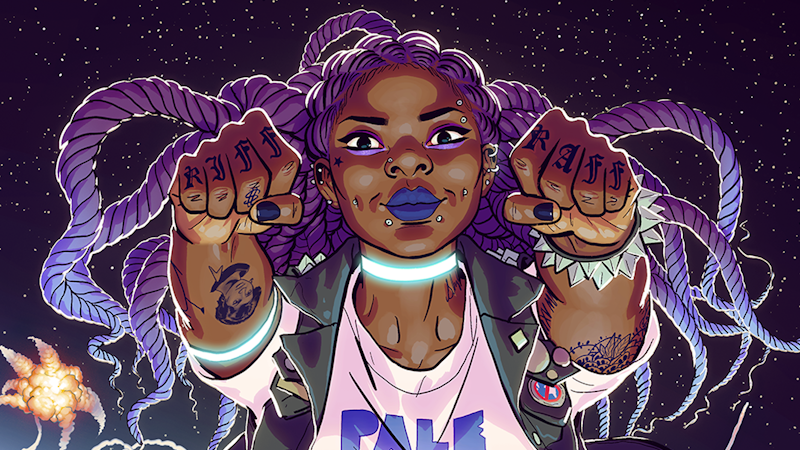 The front cover of the Iron Circus comics anthology FTL, Y’all is striking: a tattooed woman flying above a blue planet. Perhaps even more reflective of the book, though, is the back cover. It shows a mass of human beings (and a dog), mostly young, of a range of ethnicities, rushing out toward something seen off the edge of the image. There’s anarchy and energy to the picture, a sense of eagerness and freedom. It captures the idea of the anthology perfectly.

In six months, plans for a $200 faster-than-light drive will appear on the Internet. The stories in FTL, Y’all describe what happens as a result. Thus the title: FTL for everyone. Editor-in-Chief C. Scott Trotman and Managing Editor Amanda Lafrenais have assembled 19 stories, 305 pages of comics, imagining what happens when “space travel will be instantly— and chaotically—democratised.” Of course the tales go some strange places. But, strikingly, many of them go in different directions than one might expect.

The stories share a concept but not a world, and each of them does something different with the starting idea. The FTL engines work in different ways in the different stories, for example, sometimes covering astronomical distances in instantaneous jumps and sometimes requiring long journeys. The stories are set at different times after the FTL drive becomes available, even decades later, and the societies each tale imagines are quite different.

There are commonalities. Most importantly, the vast majority of the pieces here work. Even the less effective have something to recommend them, whether dynamic art or a good character idea. Among the most impressive stories are Evan Dahm’s moody, expressionistic “Wayhome,” about a family who choose to live in isolation on an alien planet; while Ahuenao’s “Finders Keepers,” about a group of young scavengers who might have hit the jackpot, mixes solid visual characterization with a witty and fast-paced plot to produce one of the best adventure stories in the book. Nathaniel Wilson’s “Story of a Rescue” has some of the finest rendering in the book, and NN Chan’s “Space to Grow” uses sleek technique to tell a fable about the ideals of exploration meeting the sewer of social media.

That last is especially worth mentioning, as social media turns up as an element in a number of tales—Blue Deliquanti’s intricate “Soft Physics,” which opens the book, is another strong example. This means that an anthology about human beings given the ability to get out and away from the world often concerns itself with the links humans forge between each other. Connection and separation is a theme of the book, and the need for other people.

It’s a little paradoxical that a book about the universal availability of FTL ends up being about community and the way people live with each other. But the technology’s a useful way of examining the stresses in a community or a social web. If simple distance is no longer an obstacle to travel, then the only challenge left is psychological. If you journey to the edge of the universe, what are you leaving behind? A story like Sunny and Jamie Kaye’s humanistic “Passing Through,” about a divided couple in the ultimate long-distance relationship, dramatizes this tension.

Exploration and indeed colonization are present in the book, as are various kinds of encounters with alien life forms. But that’s rarely the point. If there are quests involved in these stories, most of them in one way or another are quests for connection—or meditations on what’s left behind when a quester’s driven to go on their way.

Structurally, they incorporate the FTL drive in different ways. Maia Hobabe’s “The Senior Project” doesn’t leave Earth at all, instead telling a story about a high school science student working on a major project. Generally, the technology’s a means to an end, not something to be explored for itself.

It’s striking how character-driven most of these stories are. There are adventure-fiction elements to most of these stories, as the anthology’s concept would demand. But few stories here deal with pulp structures or tones. There aren’t many villains. The origins of the drive plans aren’t explored. Nobody’s trying to kill anybody (or very few people, at least). Which isn’t to say that the stories lack conflict, only that the conflicts aren’t principally resolved by violence.

As a whole, the book stays away from certain tones. There’s little true tragedy, though elements of “Wayhome” and Alexxander Dovelin’s elegiac “Lia” do explore darker subject matter. Generally the stories don’t imagine societies radically transformed by the FTL technology. But then that’s perhaps a function of the book’s overall focus on character, not background.

Crucially, the stories have a uniformly strong grasp of comics technique. Most tend toward a cartoony art style rather than realism, but all the graphic approaches work. Every story has its own way of guiding the reader’s eye through the page. There are some particularly excellent moments—for example, “The Senior Project” has a page that’s a nine-panel grid laid over a single image, depicting a conversation that broadens over the course of weeks. But all of them are well-crafted tales.

FTL, Y’all is a strong collection, testimony to the amount of talent emerging in comics. Most of the creators are young, but the work here is more than merely promising. This is accomplished and engaging work, and an anthology far more consistent than most.