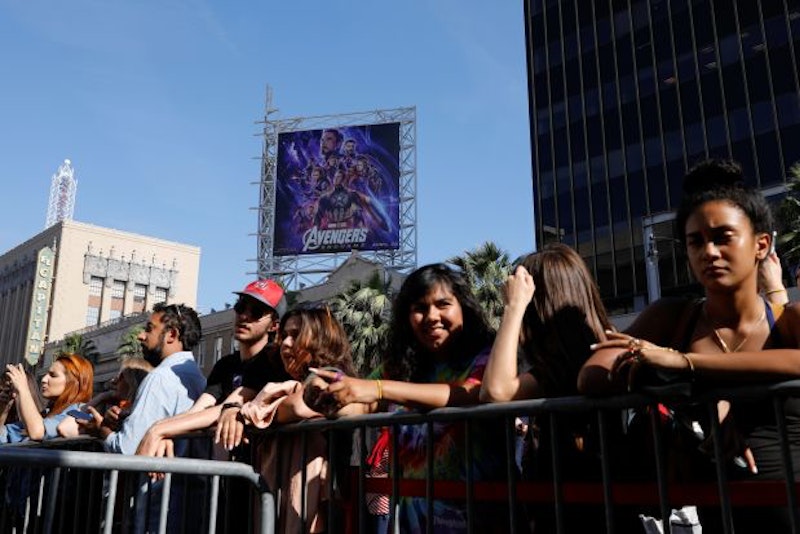 The woman in the seat behind me cried. First a gasp, then a gulp followed by an exhalation of tears. She cried like somebody at something real. I don’t know how long she lasted—minutes. One of the big heroes had just died and it hit her. This was two hours in, around there. Further on there was a follow-up tragic moment where somebody dear to the dead hero felt the sadness of his death. The woman cried again, and again it was a full cry, from the throat. But it ended more quickly.

She was alone. I’d seen her come in with the crowd, and she was definitely the type found by herself at a superhero movie. I mean she was fat, so fat that she seemed stranded; one thought of her bones trapped between chair and mass. Her eyes were small and gentle and not lively—you saw there a life of long whiles stuck in place. On her stomach she had a carton of popcorn and a bucket of soda. She loved the man in the costume and she cried twice.

My defense of the above is that it’s true. I didn’t set out to be plangent and condescending. The facts intervened. I spent my hard three hours (not really hard, the movie was great) and survived the sky-splitting pop-culture cataclysm that was the opening night of Avengers: Endgame. This global high point in something—in expansive CGI and galloping box office, in casts the size of ballteams, in media preoccupation and ambitious Hollywood planning (11 years mapped out, believe it), in the milking of nerd life-substitute entertainment properties half a century in development, in, oh well, in mankind’s present-day infatuation with a detailed fever dream of power and mundanity, of apocalypse and banter, of gaudily enhanced just-regular folks flitting before a ruptured horizon, of us decked out for this unknown age falling upon us—this world-historic entity had its merely human end, the people in the theater, and those I saw looked like packages.

They filled the place, each of them a pile. Each person seemed like an assortment of tilted wide things stacked in one place and wrapped in sweatshirts and sunken, furrowed jeans. The piles trudged, conveying tubs of food, and they sat with the tubs atop them as the screen prepared to drop its three-dimensional, bruise-colored, stadium-size dream into their faces. On their way to their slots, the various piles—the place was teeming—had to negotiate their way among other piles. “Sorry,” people said. Anxious eyes looked at each other. The voices were soft, as gentle as the woman’s eyes.

Up on the screen, Captain America was eventually found leading a support group for apocalypse survivors. He listened to a gay man talk about a dinner date and how the man and his date cried. Later Thor was revealed; he had pecs and gut hanging down, soft from video games. We were there on the screen that way, among the chaos. Various heroes died, figures loomed, the universe rebooted, and I listened to the woman. She had something to care about. On the way home, I wondered what will become of us.