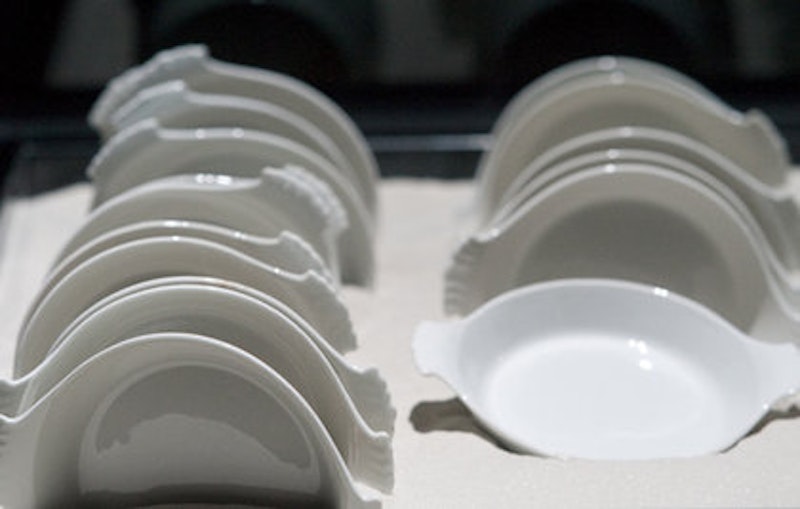 After you pay $29 a ticket, the first thing that happens when you enter the Titanic exhibit (at Philadelphia’s Franklin Institute through April) is that you are given a boarding pass. It’s the size of the original boarding passes to the ill-fated ship, and it is a copy of the exact ticket of someone who was a passenger on Titanic. At the end of the exhibit, you’re told, there’s a listing of all the ship’s passengers, and you can find out if your passenger survived the sinking of the ship.

You can, of course, venture a guess as to whether your boarding pass person is going to make it. Is he a crewmember or a third class passenger? Good luck, then. If you’re a woman or a child traveling in first class, you obviously have better chances.

The next thing that happens is that you see a replica of the “I’m the King of the World!” iron railing on the bridge of the ship where people familiar with the blockbuster 1997 movie think of Leonardo DiCaprio and Kate Winslet pretending to fly. There is a green screen behind it, and you can get your picture taken there, which will be available for sale to you at the end of the exhibit, even if your boarding pass person dies an icy death.

I thought it was icky that our first exhibit experience is a photo op. Putting a fake-Titanic-background photo of myself in the DiCaprio “king of the world” pose as a profile picture on Facebook is about the last thing I’d do upon experiencing this emotional display of artifacts. I won’t sit around and debate whether or not the graves of 1500 people at the bottom of the sea should’ve been disturbed for profit, because that battle’s already been fought and won. From an educational perspective, I do see a value in the public’s ability to learn about the disaster in a non-Hollywood fashion. But a gift shop, where you can buy replica Titanic china and marmalade jars and t-shirts, keychains and magnets? No.

In experiencing the exhibit and its accompanying IMAX movie, I learned a lot. Nearly as many people died from hypothermia in the lifeboats as from drowning. It was rumored that one of the 17,000 men who built the ship was accidentally entombed in the massive manufacturing process; they could hear hammering, but never found him.

The ship’s last survivor died a few years ago; the exhibit (held during this 100th anniversary of the disaster) is dedicated to her. The account of one of the survivors, who was seven at the time and had to say goodbye to her father as she climbed into a lifeboat with her mother, who remained sad throughout her life that she lost her treasured childhood teddy bear when the ship sank, was absolutely poignant and harrowing.

And then there is the stuff. It’s absolutely unbelievable what was recovered from the wreckage of a ship found 75 years after its sinking, from two miles underwater. There is a glass jar of cooking oil with oil still in the jar. Champagne bottles still corked contain their original contents. Perfume bottles (60 of the original set of 65 in a sample bag carried by a perfume salesman) still carry their original scent. Apparently something in the leather tanning decomposition process sealed suitcases more tightly, protecting contents. There’s an almost perfectly intact suit, a bowler hat found simply lying on the ocean floor. Jewelry. Hand-written letters and postcards, one from a man who hadn’t wanted to take the voyage and lamented that he “wished the Titanic were lying at the bottom of the sea.” The ship’s compass and thermometer, used to determine how cold the water was. Binoculars used to see the iceberg too late.

There is a room-sized replica first cabin room, a full replica of the magnificent main staircase with cherub (made famous in the award-winning film); and yes, you can get your photo taken there, too. There’s a replica of the crewmembers’ crowded chambers. One of the eeriest things seen in the IMAX film footage and in the exhibit is a double stack of white serving dishes (pictured), found lying in the sand at the ocean’s bottom still neatly stacked; apparently the wooden cabinet rotted away but the dishes remained in their exact positions, in flawless condition.

Eerie. Haunting. Those are the words that went through my mind during the experience. I had a feeling my first class boarding pass woman would make it, and she did. But the wall-sized listing of the people who didn’t make it was much, much longer.