Let’s talk about the word “faggot.” 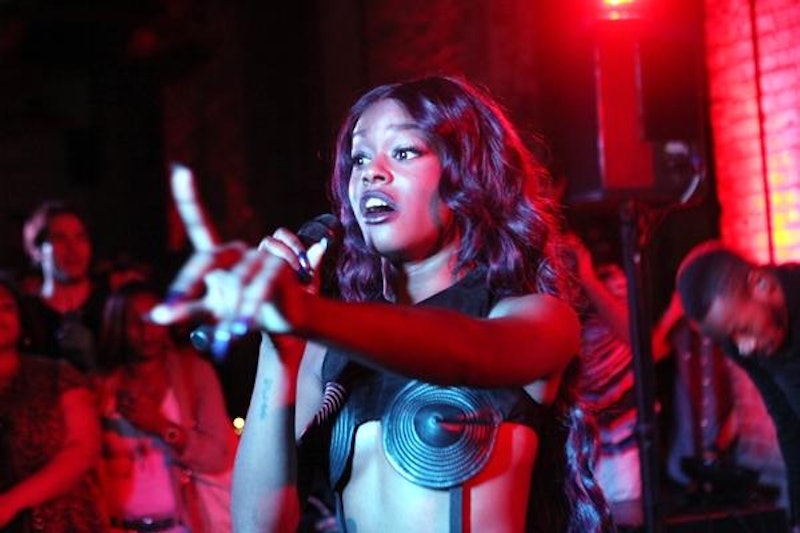 Azealia Banks, one of the hottest new artists in 2013, recently got in big trouble with the gays as well as the media mafia when she used Twitter to call professional mean gay Perez Hilton a “messy faggot.” It all started as a dispute between Banks and Angel Haze, another up-and-coming rapper who, frankly, I’d never heard of until this fight. Banks, who is known for convincing us all to sing excitedly about cunts getting eaten and for popping off at rivals without any notice, Tweeted that if you’re not born in New York, then you’re not really from New York. Angel Haze, who was born in Detroit but raised in Brooklyn, took that as a direct insult and Tweeted back that Banks was a “charcoal skinned bitch.” Banks responded, in all caps, that it was a shame for another young black artist to make fun of her dark skin color. The two artists had a heated, weave-pulling catfight on Twitter which resulted in two diss tracks—Azealia Banks’ “No Problems” and Angel Haze’s “On the Edge,” a Diplo-produced track that he has distanced himself from.

Then Hilton butted in, and I’m almost certain he knew Banks would read him for filth and that, in return, he would get a story, publicity, and page views out of the whole debacle. What makes this all so disappointing is that to an outsider, this looks like just another hip-hop homophobe using the F word, and that seems pretty offensive and immediately alarming to people who aren’t too familiar with her music. But Banks is known for borrowing directly and getting inspiration from black gay cultural texts like Paris Is Burning, a canonical 1990s documentary about the vogue/drag ball scene in New York, or by using vogue house beats with her raps, holding drag balls and performing with other underground queer acts like the House of Ladosha and even bigger queer groups like the Scissor Sisters. Banks knows that her fan base is exactly 82 percent gay men, and the gays have latched on to her, positioning Banks as a gay icon.

But since Banks’ unfortunate and disappointing use of the F-bomb, the gays have come out in stern disapproval, many even jumping the Azealia Banks ship before it even had a proper launch—despite the huge success of “212,” a mixtape, an EP, magazine covers and several music videos, her hotly anticipated debut album Broke With Expensive Taste doesn’t come out until February. On Jan. 7, GLAAD jumped in and disapproved her actions and now all hell has broke loose. But why is everyone so upset?

I am one gay who is not all that upset. I’m someone who is regularly called faggot in a derogatory way because I sometimes wear ridiculous things and people don’t always like those ridiculous things. As a term, it’s hurtful on its own, but it’s even more so for me because nine times out of 10, the person calling me a faggot is another black male.

The threat of verbal and physical homophobic violence is a real and looming concern for gay people all over the world, especially in places where homosexuality is still illegal, and certainly in light of the gay youth suicides that have plagued us in the past several years. I don’t want this debate to be about which minority group can say which word—that it’s okay if we gays use the F word, but no one else can; that us blacks are somehow entitled to unlimited and prolific use of the N word, but no one else better dare. By the way, almost every other word out of Azealia Banks’ mouth is the N word. Can we get upset about that? Can people get up in arms about that? Can we talk about the politics of being made fun of for being dark skinned? Anyone?

Frankly I don’t think anybody should be bullied and called names, period, because that stuff leaves a permanent scar from youth into adulthood. I do think that Azealia Banks, 21, has that hot New York temper where she will pop off if you cross her the wrong way, and maybe she should tone it down some, especially since she’s a role model and ASOS spokeswoman. She should be more careful and responsible with the things she says in a public space like Twitter because so many people admire her, look up to her, are cheering her on, and can’t wait to see what hotness she’ll drop next.

But I don’t think the Twitter feud was as homophobic as the media/gays are writing it up to be. I think the Tweets had more to do with that black cultural game of wits “the dozens” or “Your Momma” where the whole point is to say whatever you can to one-up your opponent, shut them down, and get them so pissed off that they try to come at you with something better, fight you, or give up entirely. Doesn’t anybody remember that MTV show Yo Momma? These “snap” games are usually played on the street and in front of an audience who usually picks a side, but in our rapid media age of Facebook News Feeds and Twitter, the audience becomes the hundreds of thousands of followers on your Twitter feed. “Snap” games reveal that anger makes us say all kinds of stuff—whatever we can say that will provoke a reaction out of you or make you feel bad, even when we don’t really mean it.

What we need to be concerned with and upset about are real homophobic threats, with curbing the rampant racism and effemophobia percolating throughout the gay community. We should not be trying to tear down a new, edgy black female artist who has done nearly everything creatively to show her alliance to the gay community—and the black gay community in particular, an audience that pop stars rarely target with such specificity. Judging by Twitter, Banks’ friends and fellow queer black up-and-comers Le1F and Mykki Blanco think this whole fiasco is ridiculous. And if they still have her back, so do I.
—Follow Madison Moore on Twitter: @popgazm