The Sexual Politics of Halloween Costumes 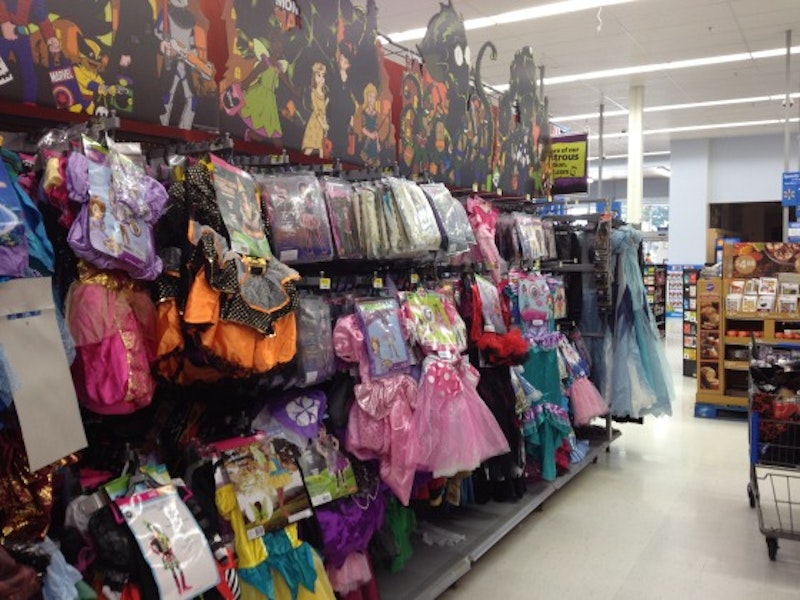 In September and October, I worked as an assistant manager in a Halloween Store. Everyone knows them, big store that pops up, filled with costumes and decorations. Pretty harmless, and usually a fun place to be. I picked up after people who’d come in and try on various costumes, chase each other in masks, and small children who would only sometimes be afraid of the motion activated props that filled the store.

But after a while, I noticed something that isn't quite as harmless. It started as a joke with some friends and co-workers. "Why do we need six different versions of a "sexy cop" costume?" Or, "Since when do ninja turtles wear a corset and a tutu?" I started to notice that this trend even spilled over into the children's costumes. The only police costume for little girls was just a mini-version of the adult women's costume, complete with short poofy skirt. Not something I've ever seen an actual police officer wear.

When I really started to pay attention, things got a little more bothersome, and then outright upsetting. The store was split into sections, with different areas for boys, girls, teens and adults. In the boys’ section there was a full aisle of "career" costumes. This included things like doctors, FBI agents, cops and firefighters. There was also a "classics" section, with cowboys, ninjas and knights. The boys’ section included pretty much everything you could imagine, from Harry Potter, Ninja Turtles and Star Wars, to vampires and zombies.

The girls’ section was another story. There were two full aisles of various princess costumes. Many of these were Disney princesses like Snow White, Cinderella and Ariel. These were cute, with glitter, sequins and plenty of tulle. There were another two aisles full of Monster High costumes. There was a fairy section, with all sorts of winged dresses. There was an aisle of "fright" costumes with different vampires, devils, witches and zombie cheerleaders. Almost all of the girls’ costumes included glitter. We even had fishnet stockings in children's sizes. Fishnets for six-year-olds.

But what was missing from the girls’ section? Careers. No doctors. No firefighters. One cop costume, described above as a mini-version of an adult woman's sexy cop. There was a small "classics" section, which included that cop costume, and a few others, like Cleopatra, a "Native Princess" and a "gangster," one of the few girls costumes that had pants. There was one Power Ranger costume, the Pink Ranger.

Plenty of little girls left the store with costumes from the boys’ section. I saw lots of seven- and eight-year-old girls proudly walk out the doors holding a Ninja Turtle, a firefighter, or Spiderman. But they had to walk to the other side of the store to get it. What type of message does this send? Boys can be heroes and girls can be princesses? Boys have careers and girls wear glitter and tulle? Boys are strong and tough, while girls are just tiny versions of a future "sexy cop" complete with fishnets and tall boots?

Don't get me started on the adult costumes. Men get screen accurate costumes, and women get a corset and a tutu. Men get to buy Spider-Man, or Star Lord from Guardians of the Galaxy, but women get a short skirt and some kitty ears? Men can buy a lab coat, a realistic looking police officer or army uniform. Women get a camouflage "dress" that is shorter than some of my shirts, or a sexy nurse, white thigh highs included.

I know what you are thinking. It's Halloween: it's not a big deal. They stock what sells, and women want to be sexy, little girls want to be princesses. Sure, some of them do. And I have no problem with a little girl who really wants to dress up as The Little Mermaid. If you want to throw on a tutu and some cat ears, and be a sexy kitty for Halloween, go for it.

But what message does it send to a third-grade girl who wants to dress up as a doctor for Halloween, that she has to buy her costume from the boys’ section? What does it say to the 10-year-old girl who looks at her options and sees only short skirts and glitter? What am I supposed to tell the teenage girl who really wants to be Katniss from The Hunger Games that the closest thing we have is a "Huntress" in a tunic and leggings? Oh, but did you see the 12 different low-cut corset tops and tutus in various colors that claim to be Little Red Riding Hood or the Scarecrow from The Wizard of Oz?

These messages are not innocent, fun or harmless. These are children. We are telling little girls, in no uncertain terms, that if they want to be strong, if they want to be heroes, if they want to be a doctor, they have to go to the boys’ side of the store. We are telling teenage girls, as young as 13, that they’re supposed to wear short skirts and revealing tops. We’re showing them that they are only as valuable as how good they look in a mini-dress. We’re telling them that nobody cares about Katniss, or Gamora, or Hermione. That every single thing they could think of being for Halloween can be, and will be, sexualized. Which essentially means that they will be sexualized.

We are not-so-subtly telling adult women that if they don't fit into a size "large" sexy referee costume, they shouldn't be dressing up for Halloween. And that size large? It might fit someone who wears a size six, if we’re lucky. We’re telling adult women that they can't possibly wear a superhero costume, unless it's a bustier and yet another tutu. That the doctor costumes are for men, but you can buy one of these sexy nurse costumes.

How can we expect girls to grow up to be strong, smart women, when we don't even allow them to try on those roles for Halloween? How can we expect teenage girls to demand respect and achieve their goals when we turn even the Scarecrow into a "sexy" costume? How can we be positive role models when women are given three different versions of a sexy bee costume, but only the men get to be doctors? And how can we expect to teach boys that women are their equals, when they get to be a knight and their sisters are princesses in high heels?

Don't try to tell me that we don't need feminism. Don't try to say that women and men are equal. Don't tell me that rape culture doesn't exist. I can look at Halloween costumes meant to be worn by four-year-olds, and see that little girls are still being told they can't be doctors, and little boys are being told that girls are nothing more than glitter and short skirts.