Taking your own children to Orlando shouldn’t be this big of a deal. 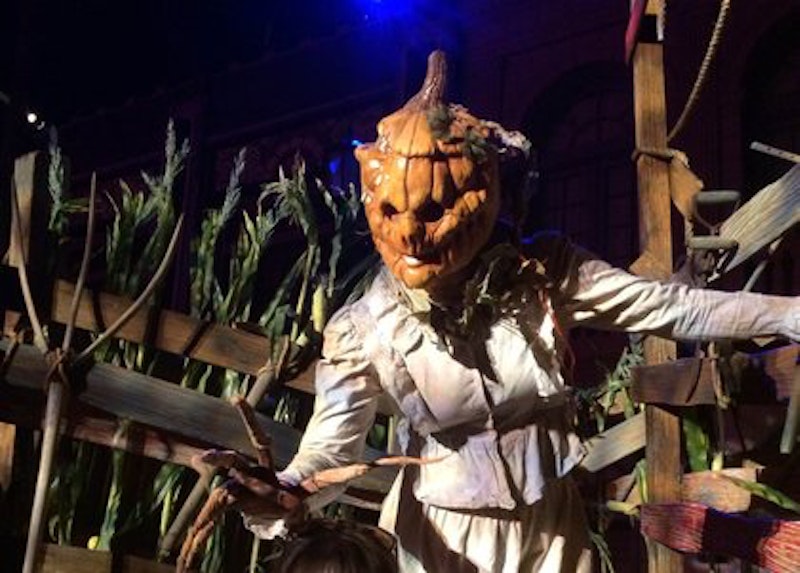 Halloween was huge for my four kids growing up in our big old haunted Victorian house. Since we moved, this was the first year they wouldn’t have the same holiday routine and I wanted to create a distraction. I tried to plan a trip for Halloween weekend, but it didn’t work out because it was Homecoming weekend for the marching band and field hockey and baseball games were scheduled.

I made what apparently is an unconventional decision that’s frowned upon by many school administrations and busybody parents: I took my kids out of school for three days. I’m fortunate to have straight-A students. My son was mad last year because he missed a half day of school the entire year when we had to visit the emergency room since his sister sprained her knee, taking him out of the running for the year-long perfect attendance award. So I don’t have a bunch of slackers, despite my slovenly parenting style.  They’re good kids. None of them was going to fail anything because of the brief family vacation.

I wrote letters to the three schools. Teachers gave work to my kids. One principal sent me a nastygram outlining the school’s policy against kids taking non-approved time outside of scheduled school holidays. I threw it out. My kids packed laptops and schoolwork in equivalent amounts with swimsuits and flip-flops. I tried to pack a (non-school-related) book in my third-grade son’s suitcase and he told me he couldn’t bring it because he had to do homework while we were away. I walked into the hotel room one night to find my daughter’s schoolwork spread all over the hotel bed. We never even turned on the TV.

As the principal helpfully pointed out, this is all my fault for scheduling a trip at a bad time. But you know what? Our family of six doesn’t get to spend much time together. The oldest doesn’t live at home anymore; her sister will go off to college next year. Is it so wrong that I wanted to bring us together for our first family vacation this year for less than half a week?

We visited Universal Studios for the first time. The Wizarding World of Harry Potter: Diagon Alley just opened in July, and we had a blast on the Harry Potter and the Escape from Gringotts ride. Taking the Hogwarts Express over for the aptly named Harry Potter and the Forbidden Journey ride was really fun. There are a ton of 3D/4D rides—from the Simpsons and Transformers to Despicable Me to Shrek, so much virtual riding went on. I loved the live shows: Bettlejuice Graveyard Revue was fantastic and I took the kids to see what in retrospect was probably inappropriate for the younger ones: "The Rocky Horror Picture Show." Oops. But the thing our whole family was most thrilled about was checking out Halloween Horror Nights at Universal Studios and its eight haunted attractions. They’re billed for kids over 13, but my 11- and nine-year-olds have been well-schooled in the ways of “scary is fun” via movies and haunted hayrides. I don’t raise wussies. We made it to six of the eight haunted houses, which wasn’t bad. ("Alien Vs. Predator" had too long a line and no one wanted to do the clown one, which I refused to visit alone). They loved the Halloween house (Michael Myers was everywhere), the “Dollhouse of the Damned” (dolls and toys are so damn terrifying; I will have ballerina nightmares), The "Roanoke Cannibal Colony" (corn stalks and cannibals are a creepy combo), "From Dusk Till Dawn" (zombie strippers, not shocking after Rocky Horror), "Dracula Untold: Reign of the Dead" (watch your neck) and far and away the family favorite: "The Walking Dead: End of the Line." The zombie makeup in this attraction, based on the show we all watch and love, was pro all the way—the benefit of having makeup artists who work for the same company that created the original movie monster greats. My nine-year-old bragged as we left the park that he had only screamed once. (I was hoarse from screaming at every spot). Also cool were the “zone” attractions like The Purge: Anarchy and "Face/Off: In the Flesh", where costumed actors just wandered around and spooked at will as you made your way around the park. The building-sized fire-breathing dragon perched atop Gringotts Bank in the Wizarding World of Harry Potter was symbolic as topping off the whole experience.

So, I illegally took my kids out of school to let them see age-inappropriate, terrifying stuff. And we had a complete blast. I’m tempted to write a Breakfast Club-ending style letter to the principal signed by the six of us. The years go by too fast, and sometimes you just have to slam everything on hold, even for just a few days, and enjoy your family.