The Reason Nobody Likes Black People 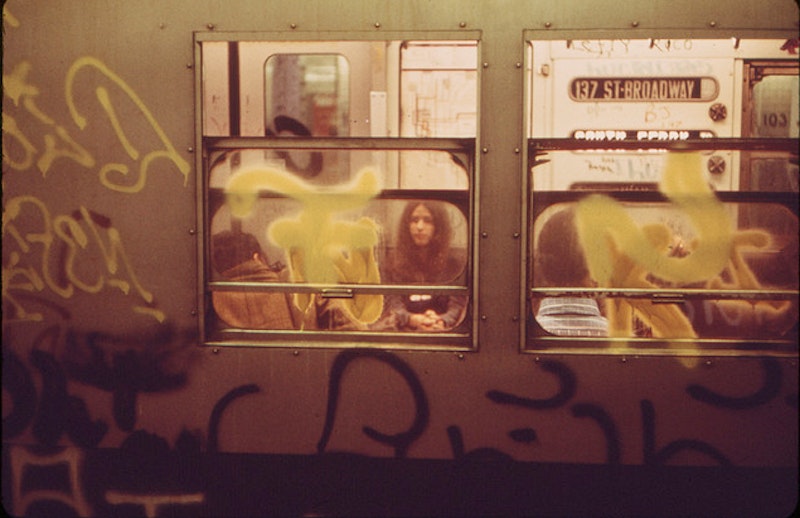 Two days ago my friend Casey and I had a hellish subway ride. We were on our way to the club, obviously wearing leotards and headpieces that just barely allowed us to comfortably enter the subway car. When we got inside the L train at Bedford Ave., our buzz was killed by this group of black kids, roughly between the ages of 15 and 18, who were busy terrorizing the whole car. The terrorists squealed and squeaked at frequencies so high I think the windows were on the precipice of their individual breaking points. They walked around the subway car, lit shit on fire, cursed, and talked smack about some of the other passengers who were just minding their own business. This happened while the ringleader of the group of hot mess terrorists dared anybody—anybody at all—to look at her.

Her backup said, “Don’t look at her.”

Amazingly, for New York City, virtually everybody complied. Nobody looked at any of them. But it’s like, there are those counter-terrorism advertisements in the subway that are all, “If you see something, say something.” But, I mean, nobody said anything. Nobody took pictures or candid videos for YouTube. We all just looked at each other, shaking our heads and rolling our eyes at each other in that non-verbal way that New Yorkers communicate with one another when something is really, really annoying. You’re really pissed off but, for the good of all, nobody says anything so it doesn’t get worse.

The whole time these kids terrorized the train the only thing I could think was: “Don’t you know you’re the reason nobody likes black people?” I wanted to say this so badly. I wanted to get up and shout this at them. I wanted to school them. I wanted to tell them they were not helping themselves because they were promoting negative stereotypes about black people. You know the ones—we’re all loud and boisterous; that we don’t know how to control ourselves in public; and that white people should be very afraid of us. I wanted to shake each of them and kick their asses till they got their acts right. Matter of fact, I wondered where their parents were, if they had any, and I wondered why they allowed their kids to be ripping and rolling on the New York City Subway system at one a.m. on a Wednesday morning. I wondered how these kids thought of themselves, how they thought we perceived them, and what they thought such a rambunctious performance accomplished.

This is not the time or the place to speculate on these kids’ up bringing. But I’ll tell you what: I wish I was 15 again and my momma got wind that I was acting a fool and lighting shit on fire on the subway at one o’clock in the damn morning. Man, she would make me go get a switch and kick my behind from here all the way to Djibouti. When I was growing up we had to have our asses in the house before the streetlights came on. And you better not try to sneak in, neither, because the storm door always creaked so loud it would wake the whole house up.

Maybe there’s something to be said about instilling fear in your kids to make them behave right, at least until they’re grown enough to do what they want to do and until, most importantly, they are no longer under your roof. I think what bothered me the most about this episode was that the kids were so young, but also that they didn’t seem to understand how something like racism works. People often take racism as a natural factor of human experience without realizing that the whole thing is a projection, a projection based on other projections. So when people see a bunch of terrorist hot messes on the subway clowning, they think, “See, black people always act like that” and there goes the projection. These kids in the subway were creating racism right before our eyes.

But thankfully we were in New York City, because New Yorkers are forcefully subjected to annoying behavior and antics every day. We’re used to it. For the most part, I think, we just shrug that stuff off without making any serious judgments about the character of the source of the annoyance. But let this episode have happened in, like, Alabama. People would have been all, “See, there goes the black people again. You gotta watch out for the blacks. They are so big and scary.”