It's Time To "Call Bono Home," The Lord Sez

Turns out God isn’t a U2 fan, either. 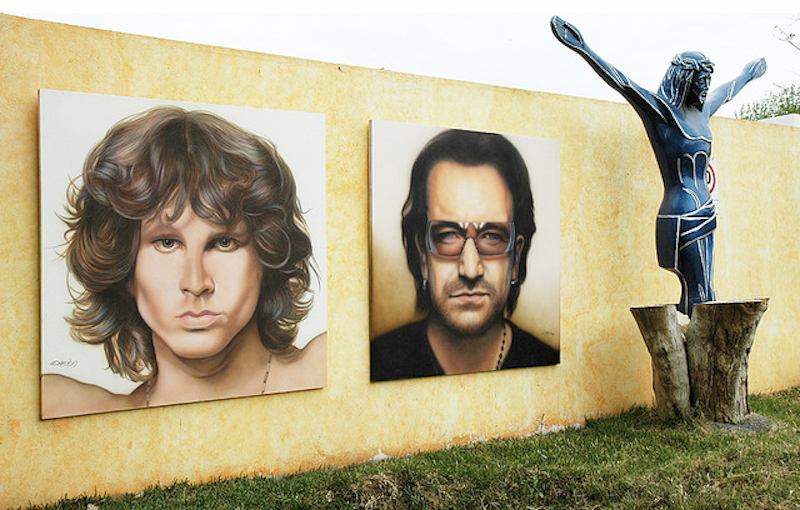 In an exclusive interview with Splice Today, God revealed that recent attempts to "call home" U2 front man/humanitarian lightning rod Bono have met with "delays, disruptions, and difficulty." Earlier this week, Bono was treated at a Monaco hospital for heart palpitations and chest pains; recently, the Spider Man: Turn Off The Dark musical he's involved in has been a commercial and logistical nightmare. Coincidence? Not at all, according to the Almighty - and the screws have only begun to turn.

Our exclusive interview with God appears below.

How will Bono die?

I really can't say. I can only promise that it’s gonna happen, and soon.

Does that mean you don't know, or that you can't tell me?

Centuries ago, things were different. I could smite a person with impunity, when the urge struck or whenever it seemed appropriate. Today there's all sorts of red tape involved, and ultimately I derive little satisfaction from the act of assassination as it's commonly understood. Of late my process has been to slowly and circuitously wear my targets down by piling up mishaps and shortfalls and disasters until the levee breaks. So when I say "I can't say," I'm pretty much in earnest; I really have no idea how Bono will die, or when—all I say for certain is that it won't be long. I've got a crack team of spirits working on this, some really crafty seraphic operators. Time is on our side.

Why Bono? Why does Bono have to die?

Look, regardless of what the conventional wisdom would have you believe, Bono isn't Jesus Christ. He cannot walk on water. He cannot heal the sick. He cannot somehow turn a basket of loaves and fishes into enough food to feed a packed SuperDome. He will not ascend to Heaven. Bono's just a smug jackass in wraparound shades who has profited quite handsomely via megalomaniac iconography for several decades now. Not anymore. Party time's over. He's going down. He’s had it coming for a while now.

Why now? Why not now? Next year is going to be pretty busy for us, so I'm trying to get moving on this. I'm booked and stressed beyond your ability to comprehend or understand. Shit is crazy.

If someone wanted to envision a scenario in which Bono could meet his end, is there an analogue in current popular culture?

Yeah. Well, I dunno. Maybe one of those Final Destination movies.

Wow. Oh, man. Those movies are messed up.

So it's not impossible that Bono might be strangled by a microphone cord or mangled by his sunglasses while performing with U2?

Hey, with me, all things are possible.

By contrast, a heart attack seems like a pretty low-key way to bite the big one. Will there be time for U2 to cut more albums?

I hope not. I mean, I don’t know. Maybe. But do you realize that total omniscience means that I have to listen to every note, chord, rhyme, drumbeat eked out in creation? All of it. The good, the bad, the inane. Everything. And then I've gotta be aware of the reviews critics write, and so much else besides. Did you see Bruce Almighty? That's nothing. It's actually much, much worse.

Give us a sneak preview. What other tragedies might befall Bono en route to his untimely demise?

I'm thinking maybe he catches malaria in South Africa, maybe dysentery or jaundice. A tapeworm. Flesh-eating bacteria everywhere. A Marshall stack crushes his feet during band practice. It's just so open-ended. Anything that you can imagine could happen. Alien Elvis impersonators. Cannibals. Piranhas. One of my favorites is that Bono's life turns into an alternate version of the Frankenstein story or the Hulk, and suddenly he's given these incredible dangerous and deadly powers out of nowhere but has a really hard time controlling them, and he kills a bunch of people and finds himself on the lam. Those stories usually end with some sort of positivity and redemption, but my version would end with Bono's nuke-riddled corpse. Just a notion, an idea. Seriously, I have no real clue how everything will play out—just the broad strokes, which I can't get into.

You're a really cold dude.

Have you read the Bible?

Yeah. A long time ago.

Then none of this should shock you.

God, level with me. Did you have a hand in what happened to Michael Jackson?

Answer this for me: who killed the Kennedys?