Revisiting Hayao Miyazaki's Nausicaä of the Valley of the Wind. 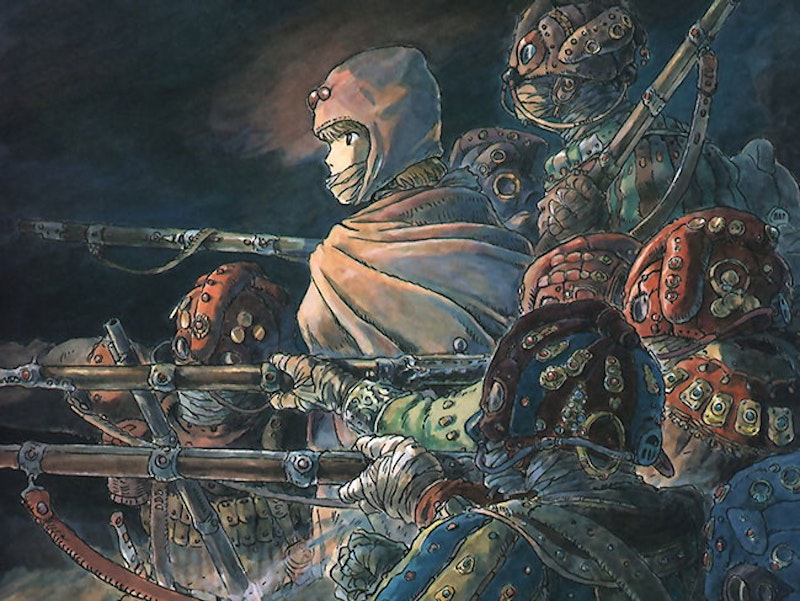 Hayao Miyazaki is the greatest cartoon artist of the past five decades, and it’s not even close. Even the least of his animated films, such as Ponyo and The Castle of Cagliostro, would constitute lifetime achievements for many of his supremely skilled contemporaries. But Miyazaki’s finest accomplishment, the 1,000-page manga series Nausicaä of the Valley of the Wind, stands apart from everything else. All of the themes that characterize his work, from strident pacifism to fear of a looming environmental catastrophe, are in play here, and they’re not limited by a six-reel runtime or any of the other artificial constraints imposed by the cinema. Miyazaki’s imaginative landscapes always appear endless, but this is the only one that, in reality, is nearly so.

I first encountered Nausicaä in 1992, in the form of a poorly-edited dub that had been re-titled Warriors of the Wind when released in the US (the Japanese anime, released in 1984, had adapted the first two books of the ongoing manga series). This was my initial experience of Miyazaki, though I wasn’t at an age when I bothered identifying creators with their work. Even in its bowdlerized state, it left a strong impression. Like the original rough cut of Orson Welles’ Touch of Evil, it was clear that much creative effort had been expended to craft a merely adequate finished product. Years passed, and then I watched Princess Mononoke, another film dealing with the possibility of an ecological catastrophe and the first of Miyazaki’s movies to have a decent run in US theaters.

Not long thereafter, a degree of Miyazaki mania overtook the country, or at least the DVD-obsessed, completist-collector fringe of it, and suddenly much of his earlier work was dubbed and on the market. The supremely compelling fantasy-horror epic Spirited Away (2002) sealed the deal for him, at least in the US; and it was after screening this film that I began reading the Nausicaä manga, which had taken Miyazaki a decade to complete and advanced the narrative well past where the 1984 movie left it.

The plot of Nausicaä is simple enough: a rising empire with considerable military might has launched an attack on its declining rival, which had made significant advances in biochemical research but otherwise been eclipsed as a world power. Nausicaä, the protagonist, resided in a border city between the two warring lands, learning sword-fighting from an elderly mentor, riding the wind on a glider, and conversing with cute animals. This outline should be familiar enough to readers raised on brainless George Lucas sci-fi fare: here we’ve got a hayseed Luke Skywalker type ready to cast her lot with the weaker good guys in order to vanquish the invading bad guys, eventually saving the day after single-handedly defeating the most powerful of the villains.

Nausicaä, fortunately, is nothing like that. The titular heroine wants little to do with either side, and is forced into action only after the Dorok leaders, facing defeat at the hands of the Torumekian Empire, release a toxic mold into the atmosphere that threatens to kill everyone. There are no epic battles or saber-rattling duels on display, just an endless string of bad decisions by self-interested commanders and large-scale military maneuvers doomed by a literal fog of war, a man-made miasma capable of annihilating anything in its path.

None of the principal players seem especially enthusiastic about a state of affairs forced on them by the short-sighted Realpolitik practiced by their predecessors. Lord Yupa, the world’s finest swordsman and Nausicaä’s trainer, spends most of his time de-escalating conflict, aware that his heroic individual efforts are largely meaningless in the grand scheme of things. The Vai Emperor, Torumekia’s world-weary veteran leader, has led his nation into combat solely because the intrigues of court life necessitate that he placate would-be assassins with martial successes or at least send them to the front lines to be killed in combat. Kushana, his talented daughter, is a hyper-competent soldier living in constant fear that her ambitious brothers are plotting to kill her. The Dorok leaders, the mystic Miralupa and the Holy Emperor Namulith, have survived for over a century via a host of gruesome surgeries and transfusions, and have been driven insane by these procedures.

All of these renowned personages make terrible mistakes, stumbling around blindly while life on a world they dimly understand faces extinction. In spite of their blunders, they either end up making meaningful sacrifices, like when the Vai Emperor uses his body to shield Nausicaä during the final battle inside the Shuwa temple, or recognizing the futility of their ambitions prior to their deaths, as was the case with both Miralupa and Namulith. Nausicaä, meanwhile, remains aloof, her mind incapable of occupying itself with petty personal concerns. She represents the model Miyazaki protagonist, a pacifist who has transcended human emotions in order to save mankind from itself. Her own struggle is not with any ostensible villain, for she readily forgives them when they admit their stupidity, but against the death drive animating their misguided behaviors.

Miyazaki is at base someone who accepts that human beings are stupid, selfish, and fallible, yet not without off-setting good qualities. Art that fails to acknowledge the essential humanity of the characters depicted therein, such as a terrifying CGI drawing produced by an AI art program that he called an “insult to life itself,” disgusts him. Most of his villains, or at least the characters who in more simplistic stories would fill those roles, cease to be so by the conclusion of his works. Their conversions aren’t meant to impart moral lessons—“ending a story doesn’t mean that everything has come to a conclusion,” he wrote in his memoir Starting Point: 1979-1996—only to underscore that people are complicated. In the case of Nausicaä, which culminates with the world saved but many important political questions still unresolved, he remarked, “I ended [that] story at the same point as we are now, the starting point of an incomprehensible world.”