Mad Magazine in the Trump Era

Its satire is as relevant as ever. 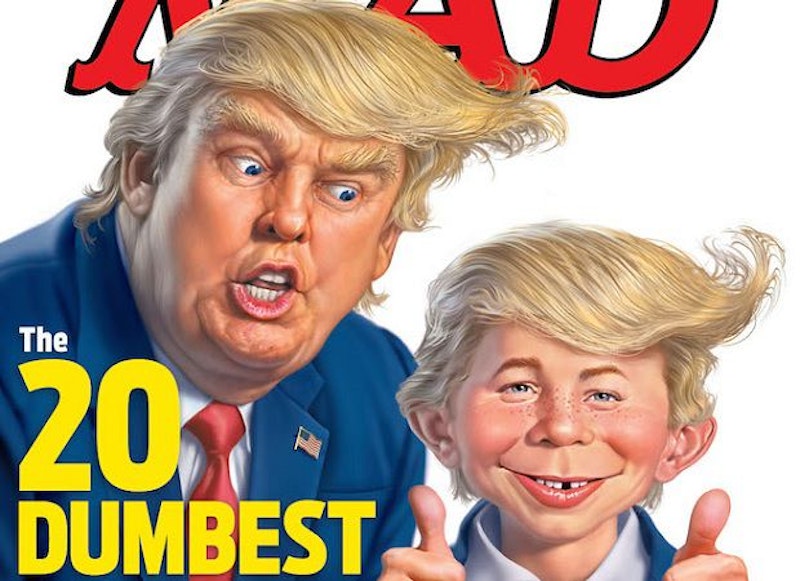 Like millions of Americans, I was introduced to Mad magazine as a child. There was no resisting the toothy smile of Alfred E. Neuman. It appeared as if Neuman recognized the farcical nature of our culture and our reality. He wasn’t given to cynicism about the idiocy around him. He took the opportunity to take shots of his own, giving everything a satirical punch.

Mad held a specific meaning of the past for onetime readers. Some are surprised to find out that it still exists. It doesn’t hold the demographic dominance that it had in an era where mass media still meant print magazines, but it slogs on. In many ways, it remains as funny as ever. My dad and I still swipe copies back and forth and collect selected compilations on Star Wars or the 1960s.

One of the ways I was exposed to the popular culture before I was born was through Mad. In its gleeful lampooning, I was exposed to the idiosyncrasies of that era. It was the lens through which I saw a lot of politics and culture. Mad is a time capsule written with a wink and a nod. One could hold a college course based entirely around the publication.

In the Internet age, satire can be practiced by anyone, for better or worse. Despite this democratization, Mad hangs around. Aside from its recent parodying of Donald Trump, it has also created some new features that focus on other aspects of the 21st century lifestyle. In particular, Planet Tad follows the story of a middle school aged boy who blogs about his hijinks.

Perhaps in the future, when children want to understand the Trump Administration, they'll learn about it like I did with the 1960s. They'll open a copy of Mad and snicker at the comical rendering that it provides. And underneath all the snickering, they'll find sharp critical barbs aimed at all aspects of our society. Mad still makes us think.