Forget 1984 or The Handmaid's Tale, read Ready Player One. 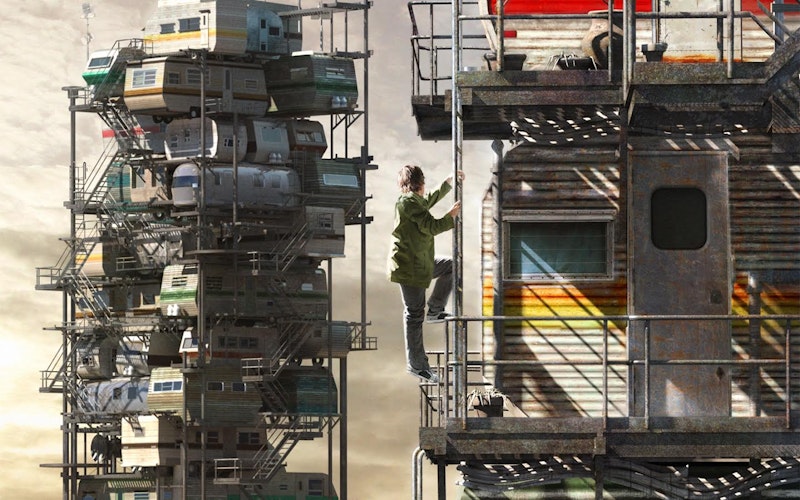 Since Donald Trump was elected president, there has been a renewed interest in the dystopian novel. George Orwell’s 1984 has returned to the bestseller lists, accompanied by a parade of articles pondering the ways books like The Hunger Games or Fahrenheit 451 can apply to Trump’s America, all of which continues aided and abetted by the Hulu adaptation of The Handmaid’s Tale. Some comparisons fare better than others, but the mistake I persistently see is the hunt for direct parallels. But if there’s any sort of dystopian fiction that most closely parallels our present, it’s Ernest Cline’s Ready Player One.

The story is essentially a high-tech treasure hunt. In the world of 2044, the center of human civilization is the OASIS, a hybrid of virtual reality, multi-player gaming, social media, and the Internet. When one of its creators, James Halliday, dies, he wills his vast fortune and empire to whoever can decipher his clues to reach the Easter egg hidden in the OASIS. It’s so well-hidden, that five years pass before the first key to the egg is found by Wade Watts, an Oklahoma City teenager. Along the way, he and his friends must fight the corporate drones at IOI who are openly using the hunt as a hostile takeover.

Watts’ “real world” life outside the OASIS is what I find so compelling. At the opening, he lives in a trailer park with his aunt, who’s more interested in his government-issued food vouchers than his well-being. Like many of these stories, his teenaged parents died very young, and they’re described as “refugees.” The Great Recession never ended, and his parents’ generation suffered the indignity of watching middle class prosperity vanish. His father was killed looting a grocery store, and his mother died of a drug overdose.

Describing Watts’ home as a trailer park doesn’t really do it justice. In the aftermath of an oil crash, “large cities had been flooded with refugees from surrounding suburban and rural areas, resulting in a massive urban housing shortage.” To maximize space, trailers end up getting stacked on top of each other, held together with “haphazard metal latticework,” into vertical shanty towns framing the boundaries of major cities. Watts lives in a top trailer, with his aunt, and her other tenants. It’s reminiscent of what used to be the Kowloon Walled City in Hong Kong, with its high crime, unlicensed businesses, and dank alleyways. Residents who work outside the stacks travel by shuttle bus. Due to the overcrowding, he’s found a hideout in the sea of abandoned cars, where he can set up a makeshift connection to the OASIS, where he both attends school and hunts for Halliday’s egg in private.

When Watts finds the first key that will lead him to the egg, he’s accosted by the IOI honcho, Nolan Sorrento, one of contemporary literature’s best villains. In an attempt to make Watts an offer he can’t refuse, Sorrento wants to make him a company man—or else. Showing Watts the video surveillance IOI has on his aunt’s trailer, Sorrento is unaware of the hideout. His homicidal threat is chilling in how true it seems: the stacks’ shaky architecture already make them vulnerable to collapse; throw in a high crime rate that includes drug labs and domestic terror cells, especially around all those propane tanks, explosions aren’t that unusual. If Sorrento blew up Watts’ home, who will care? It’s less trailer trash sponging off the system. Observing the destruction from his hideout, Watts concedes the underlying truth to Sorrento’s words, and decides to take advantage of Sorrento believing him to be dead.

In Ready Player One, Columbus, OH is the center of the tech world, and home to the headquarters of both IOI and the company behind the OASIS. Making his way from Oklahoma City to Columbus by bullet-proof bus, he experiences the world beyond the stacks for the first time. In addition to the bullet-proofing on the outside, the driver works in a bullet-proof booth, and there are armed guards in the bus’ upper deck because rural areas are now lawless badlands full of roving bandits. The journey takes several days because the highways are in such disrepair, in addition to stops at energy reloading stations. From his bus seat, Watts uses the OASIS to take on a false identity. With the financial endorsements he received for reaching the first key, he gets an apartment which he makes into a secure bunker for himself, creating a kind of self-sustaining life so he never has to venture out, and can devote his efforts to finding Halliday’s egg and defeating IOI.

After winning the second key, Watts’ new identity runs up enough debt to IOI to be taken in as an indentured worker, by force. In the novel’s world, people who can’t pay their debts no longer file for bankruptcy, they become pawns to the companies they’re indebted to. Even sadder, some people are described as doing this on purpose for secure housing, healthcare, and food. Watts does this to spy on the company and Sorrento. Again, the snapshot of life in Columbus that Watts observes as he’s being transported is chilling: parks converted into refugee camps, with tents and cardboard homes lining the streets. People in their virtual reality gear make random gestures around wireless hubs. The indentured servants can never pay their way out, of course, so Watts’ escape does make for a fun adventure.

When Watts wins the egg, he meets with an exclusive virtual reality version of Halliday that tells him not to repeat his own mistake—hiding from the real world in the virtual world. In the backstory behind the creation of the OASIS, the other creator, Ogden Morrow, leaves the company, with regret over the monster he’d created. He says human civilization is dying of neglect because of humanity’s addiction to the pleasure palace the OASIS provides.

By setting the book in smaller cities like Oklahoma City and Columbus, Cline is able to use the decline rural America is already facing to make the story plausible. A lot of Americans are still dealing with the fallout from the Great Recession. An energy crisis seems inevitable, as do food shortages. In looking at the continuing water crisis in Flint, MI, any hope of competence to protect the most basic of resources is gone. Student loans are destroying the financial futures of young people, so the prospect of bank deregulation taking a turn for indentured servitude doesn’t strike me as far-fetched. People are already committing crimes for the healthcare jail provides. The epidemics of obesity and opioids have crossed a threshold where the life expectancy of white, rural Americans has shown a slight decline.

Ready Player One reminds me of Fahrenheit 451, in that their dystopian societies emerge from a gradual decline. Ray Bradbury said, “You don’t have to burn books to destroy a culture. Just get people to stop reading them.” It’s not a coincidence that OASIS is saved by a kid who takes delight in the fact that it’s home to the world’s largest library. The resources exist to stave off decline, but the most underutilized one is knowledge.