The Kindly Grandpa Side of Saddam Hussein

The Prisoner in His Palace shows the human side of a monstrous man. 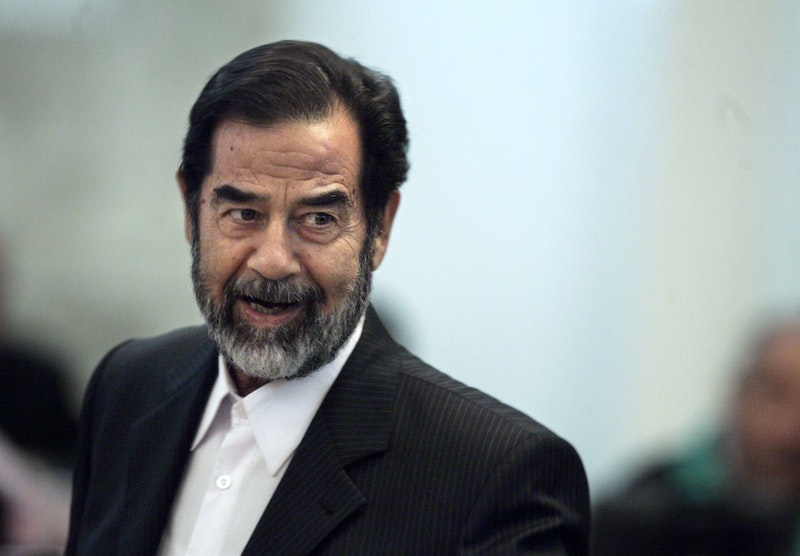 The prisoner was telling a story to the young soldier assigned to watch him about how he'd disciplined his son once, after some particularly egregious misbehavior. The prisoner torched the dozens of luxury cars his son owned, after which he lit up a Cohiba while taking in the inferno. His son was a wretched person who’d sometimes, for kicks, rape a new bride while making her husband watch. On this particular occasion, he'd shot up a nightclub with an automatic weapon after an insult, killing three and also shooting the prisoner’s half brother in both of his legs. The fond memory of the burning cars produced belly laughs from the prisoner, and his guard soon found himself unable to resist following suit.

The prisoner was the former dictator of Iraq, Saddam Hussein, who’d been responsible for perhaps a half million deaths, many of them by torture. He was talking about his son Uday. The soldier was Specialist Adam Rogerson of the U.S. Army, who was one of a group of 12 military policemen who'd been sent to Iraq and ended up assigned to guard Saddam after he was dragged out of his “spider hole” and imprisoned. Exactly how the unlikely scenario above could’ve taken place is at the heart of Will Bardenwerper's new book, The Prisoner in His Palace, a riveting chronicle of Saddam Hussein’s final weeks and a dozen young soldiers assigned to watch his every move.

The “Super 12,” as they called themselves, were mostly in their late-teens and early-20s. They’d enlisted for a number of reasons, none of which included keeping a close eye on one of the world’s most reviled dictators until his execution. The book’s title refers to the irony of Saddam ending up imprisoned in one of his old palaces. The author meticulously pieced his book together using the transcripts of the interviews that Army historians conducted with the Super 12 members once their mission was completed.

The rookie soldiers didn't know how to react when they first encountered their prisoner in The Rock, which they'd dubbed the former palace. He was a sworn enemy of the country they’d signed up to defend, so there was an initial revulsion towards the old man. Bardenwerper skillfully details the gradual process by which daily contact with their dignified and respectful prisoner softened the soldiers’ emotions to the point where they saw him as something closer to a kindly grandfather than a sadistic tyrant.

The MPs were instructed not to interact with the prisoner, but that was an unrealistic expectation. Talking with Saddam helped pass the time on the otherwise dull watch shifts, and when the guards found that the conversations were pleasant they had even more incentive to ignore their instructions. Instead of the combat they'd expected when they came to Baghdad, the young soldiers found themselves sipping tea, playing cards and chess, and smoking cigars with an attentive old man who'd traded in his imperious dictator persona for an avuncular one once behind bars. The ex-dictator would speak to the young men solicitously, telling them they were too young to be fighting in a war—that they should be home living a normal life. Once, when medic Robt “Doc” Ellis, who was charged with keeping the prisoner healthy, was about to return to the U.S. to take care of his brother, Saddam hugged him and said, “I will be your brother.”

The only real precedent for this story is Truman Capote's In Cold Blood. Over the course of multiple interviews with Perry Smith, one of the vicious murderers of the Clutter family on a Kansas farm in 1959, the author grew enamored of his subject, provoking speculation that he’d fallen in love with the cold-blooded killer. Though Smith had only a sixth-grade education, he was able to engage in discussions about art, literature, and music with Capote.

Bardenwerper’s book will have you asking if you too could be swayed like the Super 12 and Capote were when consistently exposed to a purported “monster.” Could you maintain your emotional distance if one embraced you and called you his brother, even if you knew the atrocities he committed? One also wonders whether or not Saddam consciously seduced his captors, or whether a more experienced group of soldiers would’ve been more resistant to his emotional pull. Perhaps what happened at The Rock is a prime example of a “reverse Stockholm syndrome.” Maybe the present is all that matters in situations as rare as this one, and an ugly past can be compartmentalized.