Anything That Comes Into Me Head 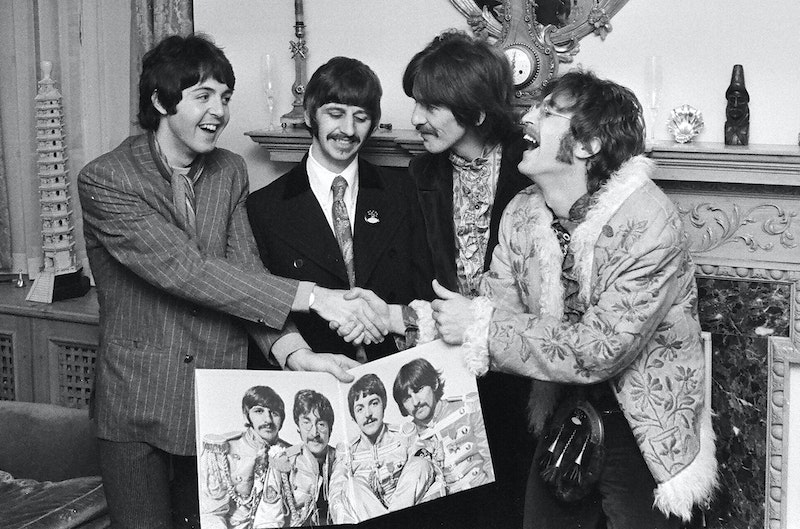 John Lennon and Paul McCartney have to get a song together for Sgt. Pepper, one of the last tracks. “Do you believe in love at first sight,” John sings. He stops—the line’s too short. “What do you think?” he asks Paul. “Can we split it up and have a pause to give it an extra syllable?” Paul gets an idea (“Do you believe in a love at first sight”) and the duo moves on. A couple of hours pass. In comes Cynthia Lennon with a Beatles crony. The two visitors sit and read while the work goes on. “What’s a rhyme for time?” asks John. “‘Yes, I’m certain it happens all the time.’ It’s got to rhyme with that line.” Cynthia, perhaps looking up from her paperback, says, “How about ‘I just feel fine’?” Now John: “No. You never use the word just. It’s meaningless. It’s a fill-in word.”

There we have the life of Cynthia, in spring 1967. The vignette comes from the group’s authorized biography, The Beatles by Hunter Davies. The author finished the job a little before Yoko moved in with John, a little after Brian Epstein died from pills. The Beatles’ peak had started to crumble. A few years later, in the rubble, Lennon gave his biographer a taste of the Cynthia treatment. “Well, it was really bullshit,” Lennon said, reflecting on the Davies book. But John had been the only Beatle to want embarrassing bits removed from the manuscript. His changes hadn’t been all that much (his Aunt Mimi wanted his childhood looking cleaner and brighter), but none of the other Beatles tried to suppress anything. This is by Davies’ account, who describes the back-and-forth in the introduction he added to The Beatles four decades after its first edition.

In fairness, Davies admits he decided to leave out the Beatles’ sex stuff and finagled the group’s drug use. He pulled this trick by claiming the use was over while including sentences like “They then lit a marijuana cigarette, sharing it between them.” (That’s John and Paul, still at work.) His book is demure when describing the night that John, tripping on LSD, was left atop Abbey Road’s roof by George Martin. “Then John came back,” it says. According to the engineer working that night, John was fetched back by his bandmates. Allegedly they performed a double-take and rushed up the stairs upon realizing that their zonked leader was teetering a few stories above pavement. Davies left out all that.

Even so, the man who sang “Gimme Some Truth” was the only Beatle to play censor with Davies’ book, and then had the crust to complain about its discretion. “You know me, Hunt, I just say anything that comes into me head,” Lennon said when Davies called him up. Apparently John never complained about the real stingers in the book. These are contained in the book’s I-am-a-camera sections, not the chapters devoted to biography proper. Observing the Beatles up close, so deadpan that he’s muckle-mouthed, Davies records John at grips with adult reality. “They decided to call Ringo,” he tells us. “John picked up the phone. After a lot of playing around, he finally got through, but it was busy.” John: “If I hold on, does that mean I eventually get through?” Paul: “No, you have to hang up.” Davies includes an episode about socks that x-rays the rock star life, emphasis on Lennon: “Mal reappeared carrying a big brown paper bag full of socks, all in bright self-colors. He passed the bag to John first. He grabbed it in great delight. He chose several pairs of orange terry-towelling socks, then passed the bag around for the others to have a dip. The night before he had said, just in passing, ‘Socks, Mal.’” And there’s the business about Cynthia.