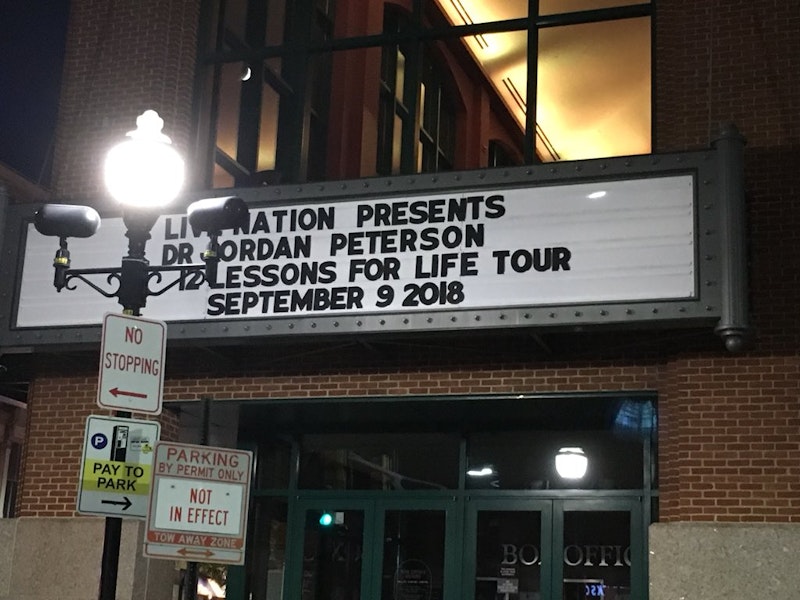 Does anyone know what the “12 Rules for Life” actually are? I’m not going to buy that squeaky-voiced huckster’s book, but I know one of them is “Clean your room.” I’ve been working in downtown Baltimore for the past week, and every day I pass the Hippodrome, whose marquee is completely dominated by Jordan Peterson. More than three weeks out from the event, it reads in full: “LIVE NATION PRESENTS/DR JORDAN PETERSON/12 LESSONS FOR LIFE TOUR/SEPTEMBER 9 2018.” Either they screwed up the book title or he’s got a new one out. Everyone else at work has passed by the Hippodrome too and has come in equally flabbergasted.

If you wanted to buy a ticket to go and heckle or “de-platform” him, tough luck: the lowest priced ticket available from the official website is $120, and the highest are $800. These are not re-sellers or StubHub scalpers—this guy is like a rash descending down from Canada and into the depths of Western misogyny, transphobia, bigotry, and resentment. He’s not a Nazi, but he believes in “enforced monogamy,” and wildly misconstrued the Canadian bill passed a few years ago that he claims infringes on his free speech and forces him, as a professor, to succumb to “compelled speech.”

Why gender pronouns bother him so much is… fairly obvious, given how much time he spends talking about “social justice warriors” (instant hard pass on anyone giving advice). If that’s a sign that we’re sliding into Orwellian groupthink, well, you must be higher than me, brother, because my ship is docked and your shuttle is out of orbit.

Tangerine Reef, the new Animal Collective record. I like it. It sounds like the same band that recorded Here Comes the Indian 16 years ago but on a whole raft of sedatives and tranquilizers. It’s beautiful and aimless in a way that I imagine scuba diving is. Not that I’d ever participate in any marine or aquatic activities beyond boogie boarding—who wants to get the bends—but Tangerine Reef actually sounds like how most people describe what going to the beach feels like, or taking a vacation. Not at all angsty or in your face, but murky and inaccessible still. There’s a patience and a focus on texture and languor that hasn’t been present on any Animal Collective-related records except last year’s Eucalyptus, a solo album by Avey Tare. Fans love it, critics are indifferent, and the world at large isn’t even aware of the album’s existence. But it’s beautiful, moody music, and perfect to work to. It sounds like they’re learning to relax again.

C-47 is a useless “shorthand” for “clothespin.” It has more syllables than the word it’s supposed to abbreviate. I forgot who but someone told me a C-47 was a trusty, reliable, and powerful plane mostly in use during WWII, and okay, sure, sounds about right, checks out, but why not “C-Pin,” or just “clothespin”? Please @ me about this, I loved to be yelled at and told I’m wrong and a stupid idiot on Twitter, it’s what I signed up for. I mean, what’s not to hate here?