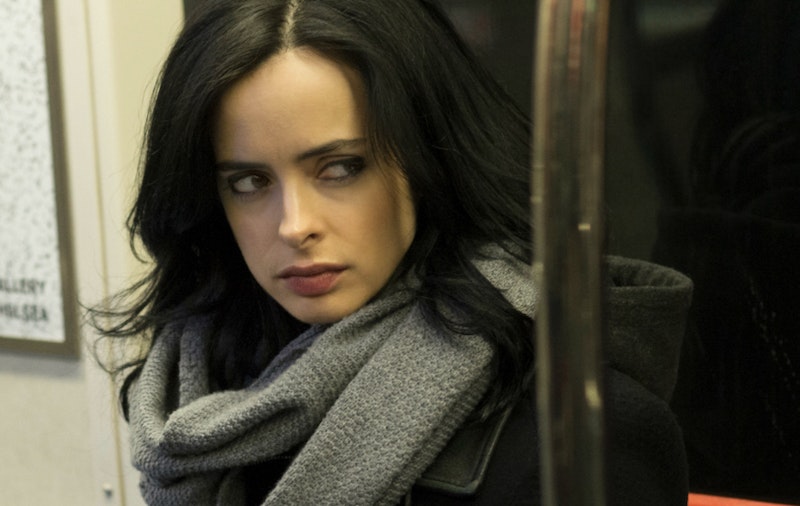 When you're a hip cultural reporter, you want to be first on the happening now thing. So I prepared myself to watch all 13 episodes of Netflix's Jessica Jones series in one day so I’d be ready with my ideas on gritty super heroines and the evil mind-controllers that fight them.

It's bleaker still because I thought I was safe. In the past, I'd made efforts to get previews of Netflix series to no avail. Maybe they've changed their policy—or more likely staff writers for The Atlantic have more pull than inconsequential freelancers with no definite venue. To be hip and happening, you need institutional pull.

There's no particular surprise there. In order to place movie reviews at mainstream sites, you need to have the piece out the day of release—which means you need to be on the list for advance screenings. To write about books, you generally need to get galleys ahead of time, which again means you need to have a bunch of mainstream venues on your resume so people will know you're important and deserve a galley. That's the way of the world.

Being in a position to go to those movie previews (like I do, sometimes) means that you've already got a track record and have proved yourself to somebody along the line. After more than a decade cultural journalism, I've earned my press pass and my chance to write about movies on the day of release. Right?

Well, maybe. But you also feel like sinecures can be random. David Frum doesn't seem like the product of a meritocracy, precisely, and many people look at my writing and wonder how I've fooled my various outlets into thinking I had something to say. All the cultural journalists declaring Jessica Jones dark and edgy can blur into anonymity fairly quickly.

Which is why you want to be the first one writing about that dark edginess in the first place. What you say is often a lot less important than when you say it, and the important critics are therefore those who say things first. And why do they get to say them first? Because (like me) they were in the previews watching. And why were they in the previews watching? Because someone thought they were important.

Writers who practice criticism for a living would like to think we're separating the good from the bad, pointing to great new things, shining insight upon the cultural landscape, and making you more enlightened by nuance than ever before. The brilliant and innovative are successful, the dull and hidebound are tossed aside.

The bland fact is, though, that the way to get read is not through genius, but covering the same thing as everyone else, but doing it first. If you want to be a famous critic, institutional affiliation and status are much more vital than intelligence or prose style. Studios, magazines, and audience—everyone knows that the critic is part of the salesmanship. Hipness is a market; no one is as perspicacious as the company stooge. If you stop force-watching your way through Jessica Jones for a minute, you can feel a darkness that isn't particularly sublime—the grinding idiocy of attempting to be on the cutting edge, just like everybody else.