Sci-fi gave us the Neutral Games. 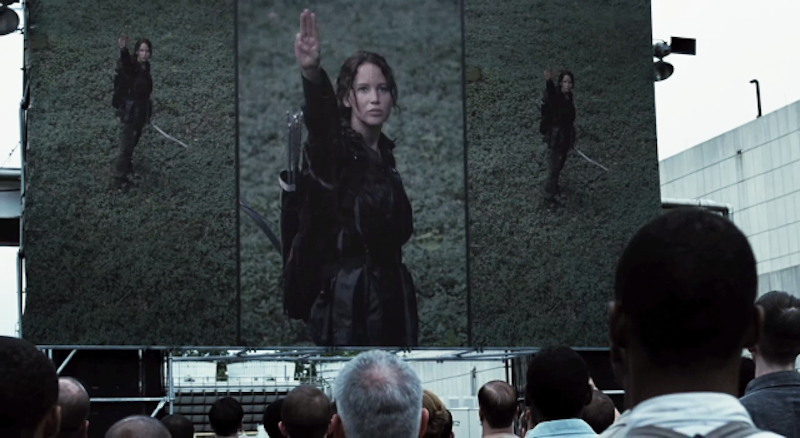 I thought the first Hunger Games film did an excellent, relatively subtle job (by teen sci-fi standards) of showing us that the fascistic society in the background of the story, with its bread (“Panem”) and circuses, is even more creepy and disturbing than the violent games in which the evil president forces the society’s youth to participate.

Ironically, the fact that some people (including some unimpressed critics) watched the whole thing thinking we were just supposed to root for our favorite participants in those games may be less an indictment of this film series than of the real-life society watching it. If it seemed disturbingly like a casual night of football on TV, maybe we should just start asking ourselves whether sports fanhood is healthy—and why politics and punditry increasingly resemble it.

But if an action movie for teens can make people that uncomfortable (much the way The Matrix made people question everyday reality), that’s a great political achievement—as was inspiring a whiny leftist column in The Guardian saying that young adult sci-fi series like Hunger Games may (gasp!) turn kids into anti-authoritarians. I miss the days when leftists were themselves anti-authoritarians.

I admit, though, that Hollywood at its savviest usually tries to have things both ways: The bad guy is a government agent—but he’s a rogue. Or maybe he spouts environmentalism—but he’s insincere. The villainess is religious—but secretly worships demons instead of God, etc.

And The Hunger Games offers morally obtuse viewers the opportunity to just sit back and enjoy the brutal spectacle if they so choose, though I think that’s a very shallow reading. You might say that at its deepest, the movie asks us to beware fascist propagandists like the Nazis’ Joseph Goebbels, while a shallow reading allows us to think of it more as if it were the work of Gary Gygax, not that I’m calling him stupid by any means.

He was the creator of Dungeons & Dragons, the fantasy role-playing game, who quite wisely decided that chucking “good” and “evil” as team orientations—and letting players choose (like some of Michael Moorcock’s sci-fi novel characters) between “order” and “chaos”—might enhance team enthusiasm. It‘s as morally arbitrary yet passion-harnessing as “home team” and “away team.”

Anarchist comic book writer Grant Morrison has sometimes echoed that subversive new duality by letting his heroes serve “chaos” instead of always (conservatively) serving “order.” And George R.R. Martin may now be the king of amoral fantasy, his Westeros as decadent as medieval Europe and Game of Thrones more convincing (on some levels) than Lord of the Rings because of it.

We seem to be a society that loves freedom, fascistic spectacle, chaos, and order all at the same time, but I will just keep hoping, for the sake of all our souls, that for viewers of something like The Hunger Games series, the deeper, more moral, ultimately more gentle message is the one that really sinks in. Maybe I’m naïve.