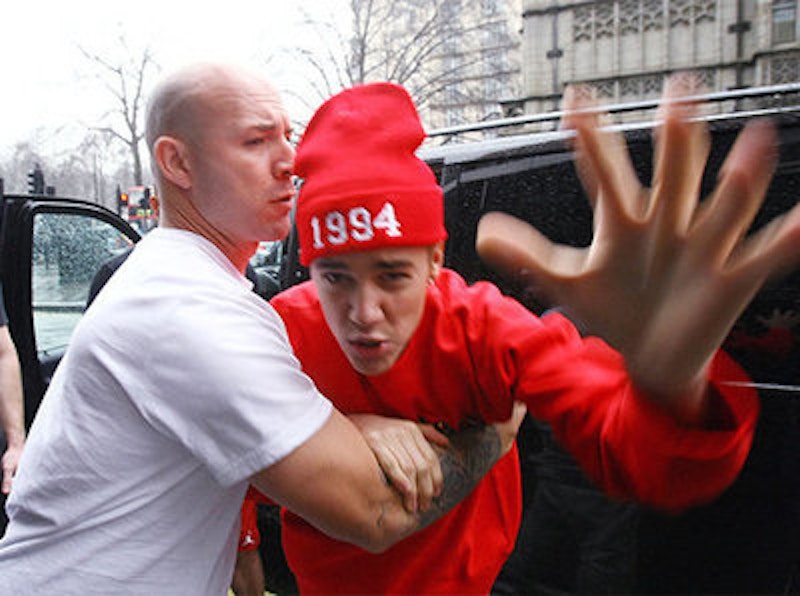 A look at the record reveals the answer: not much.  We’re living in the age of nanny-state public shaming that has grown so ubiquitous and sensitive that what used to be considered normal young male behavior is scandalous.

Bieber’s rap sheet consists of a DUI, drag racing, egging someone’s house, peeing into a bucket and then yelling “Fuck Bill Clinton!”, not having proper paperwork for a pet monkey and mispronouncing Bette Midler’s name. For these “crimes,” Bieber has gone on an “apology tour,” released a single called “Sorry,” and is on, according to The Guardian, “a quest for redemption.”

In the 1980s there was a term for getting drunk, egging houses, drag racing and messing around with wild animals. It was called Saturday night. Before the liberal hall monitors (H/T James Wolcott) took over America, it was expected that part of adolescent behavior involved risk and stupidity. Our parents and teachers expected us to drive too fast, be stoned at the wrong time (a wedding), grab an ass or two and go to Ocean City and disappear for a week (no cell phones, no GPS). They had an innate understand of the Jungian concept of the shadow,  that beneath the veneer of civilization was something wild, dangerous and joyful, a soul electric with sex and slapstick. One winter night in the 70s my father, full of Jameson and gusto, went streaking.

People once knew that to suppress the shadow would be to deny a part of our humanity. (There was a way to go too far, but it was reserved for truly horrible things—Norman Mailer stabbing his wife comes to mind.) This was particularly understood about actors, athletes and entertainers, who have to tap into extreme emotional places for their craft. We looked the other way when they stumbled out of clubs or got caught with prostitutes. Bieber is a talented pop star who’s handsome, has more money than Saudi Arabia and can bed any girl in the world. If he wasn’t drag racing and peeing into buckets there would be something wrong with him.

My favorite celebrity rampage story of all time happened in 1985, when Washington Redskins’ running back John Riggins got tanked at a black tie dinner and told Supreme Court Justice Sandra Day O’Connor, “Loosen up, Sandy baby. You’re too tight.” Thirty years later the story is hard to believe for the fact that people didn’t call the cops, send Riggo to rehab, and have all-day seminars on the “sexism” and “privilege” Riggins displayed. Reading the play-by-play of the incident from our limp and arid safe space of 2015 is like viewing those glamorous pictures of a sexy, colorful Cuba before the revolution. From USA Today:

Riggins: “I had been with a good friend, had a few beers, didn’t bother to eat, went down to the hotel where the party was, walked in and, God I don’t know why, because I hardly ever drink it, I had a double scotch. And I had another.”

Riggins approached his table, where he was seated with governors, magazine editors and a Supreme Court justice. Riggins saw Virginia Governor Chuck Robb. “Gooo-be-na-tooor!,” he said, according to Robb. “I understand that we’re going to be seated at the same table tonight!” The dinner began. “I continued to drink my dinner,” said Riggins, who refused food.

Governor Robb: “There were two bottles of red wine and John, in a very expressive mode, managed to mow both of them down. So they brought two more bottles of red wine, also within John’s reach, and [he] somehow managed to knock them over. So, at this point, the table is covered with red wine.” O’Connor was about to leave because she had an early commitment the next morning. Riggins approached O’Connor’s seat, put his arm around her husband, looked over at the first female justice in history and uttered the famous line, “Come on, loosen up, Sandy baby, you’re too tight.”

Jill Cohen, witness: “Then he squatted and was staring off into space. He was really out of it. Then he dropped to one elbow, then he was flat on the floor. I knew he was under my chair when his cowboy boots hit my shoes.”

“He just went back without a sound,” said Chuck Robb. “They left him there through the whole speech [by Vice President George H.W. Bush.]” Guest Marin Allen: “People checked Riggins a couple of times during the show to make sure he was breathing.” The Redskins’ star slept for 45 minutes. Then got up and went home.

No police. No lectures. No rehab. No hand-wringing on ESPN, invasion from TMZ, or buzzkill symposium on “Patriarchy and Privilege: the John Riggins Problem.” Everyone, including Justice O’Connor, laughed it off. The Washington Post came up with one of their greatest headlines ever: “John Riggins’ Big Sleep: He Came, He Jawed, He Conked Out.”. I was in college in D.C. at the time, and remember the main thrust of the city’s reaction: Let Riggins be Riggins.

So let Bieber be Bieber. He should stop apologizing, buy a Porsche, fill it with liquor and weed, put Selena Gomez in the front seat and drive to Mexico.