The Girl In the Fireplace

A Close Reading of Doctor Who. 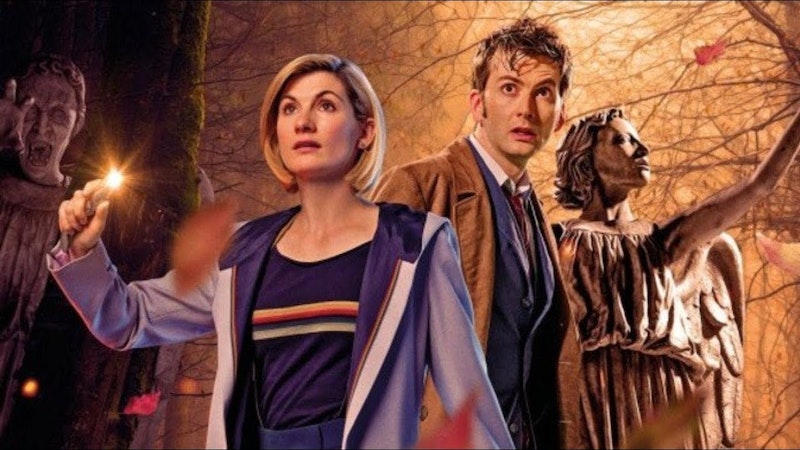 HBO Max, which is still fairly new, is streaming the whole Doctor Who reboot on demand. As soon as I heard the news, I started working on my close readings of the best episodes. Not everything demands a close reading. (The less one complicates an episode of Friends, the better.) But Doctor Who runs on them; even a tentative attempt to “unpack” a symbol makes the TARDIS—the large phone booth that carries the Doctor through time—fly more straight and true. The show makes very little sense without interpretation. It’s an action show about a nonviolent “Doctor” who fights most of his battles with a futuristic laser pointer. (In case you’re a Doctor Who novice, I’m not kidding.) It’s also a platonic romance between a Doctor and his Companion, both of whom change into different people over time, while remaining in exactly the same relationship and never admitting the relationship even exists. Some of the featured villains include clocks in wigs, imperious metal boxes, something called an “ood” with viscera for a head, and… malevolent snow. Obviously, somebody has some ‘splaining to do.

But I’m not explaining away the show’s magic; it’s enough to point out where a few of Doctor Who’s winding pathways lead. A good close reading is like learning that “the sound of the ocean,” inside a conch shell, is really the amplified sound of blood in your ear. At first you feel cheated. Then the idea of your own blood, roaring like that, takes on a certain strangeness and grandeur all its own. “Maybe it’s an ocean after all, in microcosm,” you murmur, startling the other people on the subway that morning. In the end, you don’t even want your old misconceptions back; the truth about conches makes a much vaster sound.

“The Girl in the Fireplace” takes place partly in the future, partly in Restoration France. The “future” bit is set on an abandoned spaceship; the ship’s AI, programmed to do routine maintenance, has gone insane and dismembered the entire crew (to create new “parts” for the ship). It’s now looking for a new “brain,” and has decided it needs the decapitated head of Madame de Pompadour, mistress to Louis XV—a real woman who died in 1764. The entire ship has been repurposed as a series of wormholes leading directly into Madame’s life, starting in her childhood.

When the Doctor realizes what’s happened to the crew, his reaction is priceless. He’s not exactly horrified or outraged. It makes a lot of sense to him: if you were a computer, and the only value programmed into you was keeping a ship working, you’d kill people too, in the name of routine maintenance. The ship’s a bureaucracy. Headless but purposive, it metes out life and death to human beings: the people who designed it, as a tool for the greater good, become its first victims. Doctor Who fights back with wine and sarcasm, which are both vexations to staunch proceduralists (including these robot janitors). He scoffs at their precision and gums up their clockwork. In a sense, he’s defying God himself; in the 18th century, when this episode takes place, God was commonly described as a “perfect clockmaker,” who wound up the universe, planning everything about Nature’s great and intricate machine. The actual machines, on the spaceship, are doing everything possible to recapture the historical moment when a mechanistic worldview was ascendant. Mark Gatiss, the writer, gives the ship’s robots the dignity and pathos of all those lost souls—real human beings—who wish they’d been born at another time, when the world was a younger place with different gods. “We are the same,” the robots tell Madame de Pompadour, with considerable sadness.

Not everyone wishes they could live sometime in the past. Madame de Pompadour was a woman ahead of her time, immensely educated and refined, but constrained to lead the marginal life of a courtesan. If you Google her, this episode of Doctor Who dominates the search suggestions—which is precisely what Gatiss intended. Madame de Pompadour was almost forgotten when “The Girl in the Fireplace” appeared; by creating windows into her (genuinely) fascinating world, the show created an enduring place for her in our collective consciousness. The facts of her life, by themselves, aren’t sufficient to pull that off; you must evoke her, summon her in the flesh, as only a good storyteller can. Revived onscreen, we see how the Madame uses sex as an alibi for her cultural and intellectual gifts, things normally reserved for men. Time is her enemy: as soon as she’s too old to be a desirable mistress, she will be superfluous and pitiful. That’s why the “clockwork” men from the spaceship hold their sharpened steel against her throat; they’re personifications of Time itself, as it appears to her. That’s also why the Doctor, who understands her, always jumps out of her fireplace when the clock on her mantel is broken: time stops with his recreation of her history. She’s always beautiful, always regal. But such eternities never last.

The spontaneous love between Madame de Pompadour and the Doctor is convincing. That’s partly a function of the real sexual chemistry this fantasy ignited; Sophia Myles, who plays the courtesan, actually started dating David Tennant after filming was complete. But it’s also a logical meeting of the minds. The Doctor is the only person who sees, understands, and fights back with her against the clockwork men. They’re the exploitative historians who want to dissect her, reducing her to the sum of some admirable parts. They’re the Doctor’s bad conscience as well; the man was once a lonely boy who escaped into stories about the court of Versailles. He’s looking for the “missing parts” he needs to survive; he also wants to tell Madame de Pompadour that “we’re the same.” In order to be different from her murderers, therefore, Doctor Who has to renounce her. He does so, and in this most British of shows, he does it with poignant reserve. But she will not have it; she wages a passionate war against his English desire to suffer in silence. When he’s absent, she resorts to purple prose. “It is worth suffering monsters,” she declares, “for the sake of an angel.” It’s worth suffering the cruelest things about Time to have been beautiful once. Perhaps it’s even worth dying out, in the memory of the world, to have been careless of your own greatness in your prime.

Like all the greatest fictions about death, this episode of Doctor Who reawakens old griefs. When it ended, I thought about the friend who first introduced me to Doctor Who. Like Madame de Pompadour, he died shortly after turning 40. But his memory didn’t sour or alter the show. I just began turning over, in my mind, his subtle description of this episode: “It’s a perfect miniature.” My friend’s life was not extraordinary. (Perhaps, without the right frame, Madame de Pompadour would look shabbier as well.) But he was exceptionally skilled at finding artworks like this; he’d point you towards stuff that broke the mold. “The Girl in the Fireplace” isn’t about fireplaces at all; it’s about clocks and mirrors, and isn’t afraid to shatter them, going a step beyond the known. The story is a threshold, a promise, an abyss, all done in miniature. That sound is the blood roaring in your ears.