The Bitter Angels of Our Nature

A second close reading of Doctor Who. 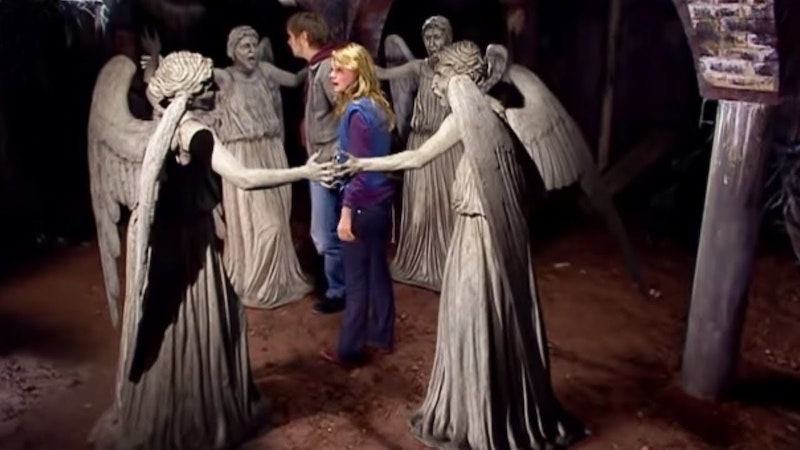 It's a bit strange, isn't it, when a show gives previews of what will happen the following week? I find it uncomfortable, because it's a reminder that the fundamental illusion necessary for any story's dramatic interest—namely, that the characters are like us, and possess freedom of action—is nothing but that, a mere illusion, one that no longer exists for all sorts of people involved in producing the show. They know what is going to happen, because for them it already has happened. Traces of this phenomenon, of this temporal uncanny, pop up whenever, for instance, a script leaks before a show airs.

The temporal uncanny is not merely a curious side effect of narratives that appear as serials. It’s a fundamental part of our human experience. We’re surrounded, on all sides, by people who are, for example, learning the same mathematical formula or facing the same moral quandary that we learned or faced years before. Relative to ourselves, many people appear startlingly avant-garde, but only to us, and others appear hopelessly stuck in the past, even though they perceive themselves to be merely traditional, not retrograde. This is true of many conservative or fundamentalist religious sects; it also tends to be true of professors.

The virtualization of our world, which is an inevitable consequence of technological advances in media and communication, has magnified and accelerated this effect so much that we wander around in a state of almost constant disorientation. One person hears the voice of Jane Austen, instructing them to speak in crisp, tart, complete sentences. Another person finds the strength to remain "traditional" or "radical" through conversations with sympathetic friends and family—over the phone and the Internet, and by flying to different parts of the world. There’s a beautiful side to this global process of coming unstuck in time. It gives us the sense that people are, increasingly, allowed to be who they really are, whether that means writing handwritten letters with fountain pens, or finding true love with another "freak" like themselves, or holding out against racism, xenophobia, or homophobia. There’s also a feeling of legitimate terror. The temporal uncanny inherently reminds us of our own impending death: the end of the show Six Feet Under contained scenes of every major character dying, all of them at different points in time.

In one of the greatest Doctor Who episodes ever written, "Blink," the simplest explanation of The Weeping Angels (the monsters) is that they have these two faces. They appear as beautiful angels, covering up their faces and tears, or else as frightening ghouls. When Sally Sparrow says, "sad is happy for deep people," she’s talking in part about the intense, bittersweet feeling of celebrating life without forgetting how it always ends. The old and new sometimes co-exist in gentle recognition of one another: young Sally and old Billy sit quietly in Billy's hospital, in the hours before his death, in the gorgeous mottled light of the diminishing rain. Being aware of death isn't the same as becoming morbid. When I was in college, my girlfriend and I used to just stare at each other, for as long as half an hour, to really be there in the presence of our love, you know, so we didn't, like, forget how much we were really in love at that exact moment.

In "Blink," morbidity leads to the comic spectacle of characters trying not to blink, much like the people in Invasion Of The Body Snatchers who try not to fall asleep.

The uncanny assassinates us in still other, more insidious ways. Who hasn’t, like the Doctor himself, witnessed people gradually transforming into their parents, a process that so often begins with a wedding? A wedding isn't required, however—most of the time, the people we knew eventually become strangers. Suddenly they’re genuinely concerned about those cultural influences that are corrupting our children. They stop listening to music. They develop little hobbies and tastes with a placid satisfaction that seems totally out-of-joint with how "new" this all is to us. It’s not a sudden process, but it feels sudden. There’s always some signifying moment that reveals, to both parties, just how much has changed. This happens to Sally Sparrow. She tries to drag her basically uninterested friend, Cathy Nightingale, into her fascination with a sublime, decaying old estate. She turns her back for one second, and Cathy’s gone, whisked away by The Weeping Angels back to 1929. In her letter to Sally, Cathy writes:

Don't feel sorry for me. I've led a good and full life... a new life is exactly what [I'd] always wanted.

Perhaps no other moment, at least among the television episodes I've seen, captures so beautifully and deftly the way we can wish people well, even while fully aware that we've ceased to understand them. When the past stays in its place, like the beautiful circle of Weeping Angels at the episode's end, we’re safe. But that’s not what it does. Time is more like a revolving door: one segment closes, carrying away the other people, and we pass through alone, encased in moving glass. The simulated conversations we have with "kindred spirits" in the past and future, through media and the archives of media (which, for all intents and purposes, are infinite), split us apart and set us on chaotic, divergent courses. Sally overhears a video store clerk yelling, at a television screen that cannot hear him: "Go to the police, you stupid woman! Why does nobody ever go to the police!" As a result, she goes to the police, an act that ends in The Weeping Angels seizing a young policeman and deporting him to 1969 (making him part of the Love Generation, like the Doctor, who sends Sally his "love" in the first scene).

The most surprising and disturbing effect of these fragmented, illusory conversations with dead people happens to Cathy's brother Lawrence. (Get it? Lawrence Nightingale?) Lawrence discovers the Doctor's "easter egg" DVD extras, which are really instructions for Sally, so she can defeat The Weeping Angels. The conversation between the Doctor and Sally has come unzipped, and half of it’s floating around as an easter egg. The easter egg spawns a discourse of its own, and a subculture grows up around interpretations of the Doctor's cryptic prophecies. At one point an instruction for Sally, "look to your left," seems to Lawrence to be a political allegory.

This is the note on which Moffat's haunting, wonderful little sonata ends. There’s a dutiful nod to carpe diem, what with the Doctor almost being in too much of a hurry to receive critical documents from Sally. It’s bad to be in a hurry, because life passes in the blink of an eye. That's not the last scene. The last scene is a voiceover by the Doctor, issuing his terrifying warning about The Weeping Angels, set to a montage of shots of sculptures. At first glance, this appears to be the standard horror-movie trope of the "incomplete victory." Yes, the heroine may have survived, but she was lucky, and we may not be so lucky—one day, the Sinister Egg of Doom will hatch again! This interpretation can't be sustained, because the statues don't look anything like The Weeping Angels. There's a statue of Willie Mays. There's a statue of a horse. Neither Willie Mays nor the horse are weeping, as far as I can tell. After the montage is just the zoomed-in, pixilated image of the Doctor's face, obsessively repeating the same obscure message. The neurosis has exceeded the danger, immeasurably so. Four Weeping Angels are nothing compared to a million paranoid people watching YouTube. But that's not why I return to this episode so often. I don't come back for a lecture on the dangerous properties of memes. I come back to watch Billy and Sally in the chiaroscuro of the rain.