Jousting with Aesthetes on Primetime

Talk shows are a lot nicer today, which is a shame: who would ever entertain Gore Vidal and Norman Mailer fighting today? 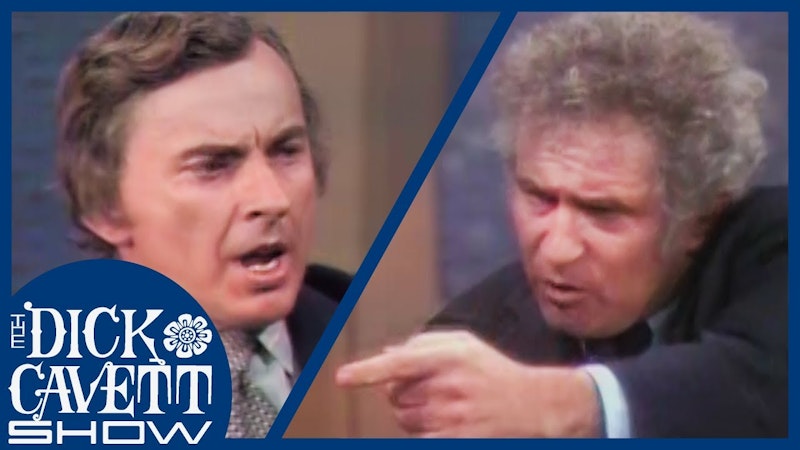 In 1971, in the green room of The Dick Cavett Show, Norman Mailer head-butted Gore Vidal. Vidal had given the pugilistic author a withering review of Prisoner of Sex, comparing Mailer to Charles Manson. But that was just a prelude to what would occur once the cameras were rolling. Mailer, who'd been drinking, inflicted some damage backstage, but Vidal and Cavett tag-teamed him for a victory when he had only words as weapons. When Mailer mocked Cavett's sheet of prepared questions, the TV host responded, "Why don't you fold it five ways and put it where the moon don't shine.” TV isn’t as good as that anymore.

Six years later, Mailer threw a drink, and then a punch, into Vidal's face at a New York City party. Lying on the floor, the novelist quipped, "As usual, words fail him." Later, Vidal would recall that he remembered seeing a “tiny fist” coming at him that evening.

Literary feuds were a lot of fun. Cavett would later say that they promoted that show like a fight—it was Ali vs. Frazier for the book set. Cavett's talk show was the perfect vehicle to showcase the animosity and package it as entertainment for the masses. We can only imagine what would’ve happened if Cavett's show had been around during the time of the Marcel Proust vs. Jean Lorrain feud in the 19th century that was prompted by a negative book review by Lorrain. Lorrain, a homosexual, suggested that Proust had had a homosexual affair. The two writers ended up in a duel in which both of them missed the other by a comfortable margin, perhaps intentionally.

Mailer had a history of violence (he'd already stabbed his wife before his Cavett appearance), but for the most part literary feuds throughout history have been verbal affairs. Occasionally, however, these disputes have become physical; nearly always, it seems, at parties. Theodore Dreiser, incensed over an allegation of plagiarism, slapped fellow novelist Sinclair Lewis twice in the face in 1931 at a swanky New York City dinner party. In 1936, at a party on Key West, Ernest Hemingway and poet Wallace Stevens came to blows. Stevens broke his hand in two places with a punch to Hemingway's face. At a party in 2003, Pulitzer Prize-winning novelist Richard Ford spat in the face of African-American author Colson Whitehead two years after Whitehead had eviscerated Ford's collection of short stories, A Multitude of Sins, in a book review. Had Ford, who's white, done that in 2020, cancel culture would’ve disposed of him.

While there are still literary feuds, they lack the entertainment value of their predecessors. The most recent spectacular dustup between authors involved involved three from the Northeast—John Updike, Norman Mailer and John Irving—ganging up against Southerner Tom Wolfe. The native of Richmond, Virginia had worked his way up through the ranks as a journalist with a flashy style, and then with the great successes of both Bonfire of the Vanities and A Man in Full, he threatened to take the heavyweight fiction crown. The "Three Stooges," as Wolfe would later come to call them, weren’t going to sit still for that. When A Man in Full came out in 1998, they panned it. Updike dismissed it as "entertainment, not literature." Mailer rejected the book as journalism masquerading as a novel. Irving was the most scathing. "It's like reading a bad newspaper or a bad piece in a magazine," he said. "It makes you wince."

Wolfe was game for a fight. He called Mailer and Updike "two old piles of bones" and claimed that the younger Irving, an admirer of Charles Dickens, was jealous because it was now Wolfe, not Irving, who was compared to Dickens. Wolfe's assertion was that his rivals, instead of engaging in the life around them, were squandering their talents on introspection and self-indulgence. He thought they were navel-gazers stuck in their rooms, while he was out on the street soaking up the zeitgeist. His three detractors were concerned that Wolfe, by turning intricate reporting into fiction, wasn’t producing anything of literary value.

That feud, and Mailer vs. Vidal, are reminders of a time when literary celebrities could occupy a significant space in the mainstream cultural conversation. There are no equivalent personalities today, so any literary feuds that do break out have limited cultural impact. Jonathan Franzen can get into it with fellow novelist Jennifer Weiner, but it has only niche appeal. Unlike Mailer and Vidal, few Americans even know who Franzen is. Moreover, Weiner, a commercial, chick lit novelist, is way out of Franzen's artistic league. Their feud, over Franzen's alleged preferential treatment by book reviewers, wasn't Ali vs. Frazier; it was Ali vs. a Golden Gloves champ.

A juicy literary feud requires parity, such as when Salman Rushdie and John Le Carré were at each other's throats for 15 years after Le Carré criticized Rusdie's The Satanic Verses for insulting Islam. The remark carried an extra sting for Rushdie because he had to go into hiding in 1989 when Ayatollah Ruhollah Khomeini of Iran issued a fatwa ordering Muslims to kill the author because of what he'd written in the novel.

Literary feuds in the 21st century are tame, perhaps because they tend to occur on Twitter, as opposed to boozy parties. Booze isn't as acceptable as it used to be. Today's writers are a careful, career-oriented bunch with more in common with corporate middle managers than larger-than-life characters like Norman Mailer and Gore Vidal. Everyone's a lot nicer, which isn't much fun.