The Old Guard is a vampire cliché without the fangs 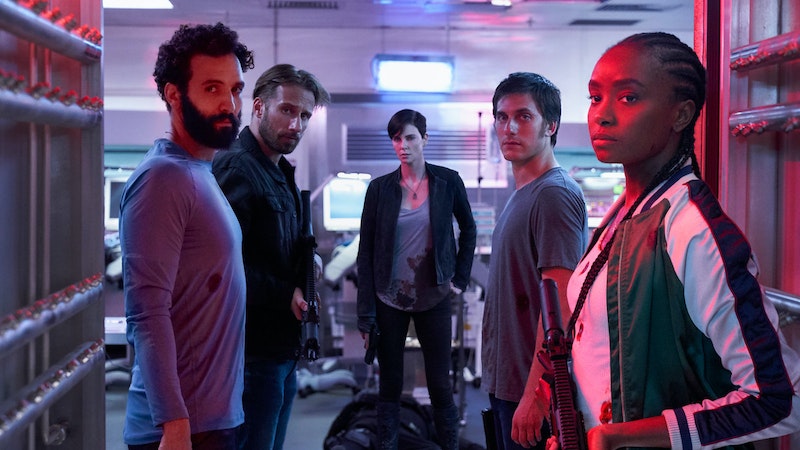 In Netflix’s The Old Guard, everyone good lives and everyone bad dies. That’s where we begin and where we end after two hours of gun kata delivered by a low-rent, yet extremely sensitive, group of superheroes. It’s a wriggling mass of clichés and sci-fi hackwork that, in the end, comes across as Interview with the Vampire meets The Punisher. And it’s painfully boring.

Everyone we’re meant to love—women on active duty who grew up to be “fighters” because dad died in a combat zone; trim, soulful gay men living an immortal love story while dishing out a constant stream of headshots; ancient Greek warrior goddesses with art deco battle axes and haunted pasts—are saved and celebrated. Everyone we’re meant to hate—arrogant, TED-talking CEOs; black-clad homophobic stormtroopers; weasel CIA hackers on holiday from the deep-state hivemind—get greased or are converted to the cause of Truth, Justice, and Sensitivity.

It’s a movie with values that reflect the cultural moment but, in spite of the action and the Hollywood morality, The Old Guard barely keeps its pulse. We want to like it, but it’s too dreadful to like, which is a pity since the acting talent is considerable. Unfortunately, even the greatest actors can’t salvage self-conscious writing unwilling to stray very far from Central Casting and afraid of offending Virtue by displaying a shred of human complexity.

The story, in brief, is that Andy (Charlize Theron) leads a group of immortal mercenaries with regenerative healing abilities, who travel down the centuries taking part in major world conflicts. Somehow, although they’re master killers, they manage to only dispatch bad people so that future generations can grow up to cure diseases and fight injustice. But they’re hunted by an evil pharma bro who wants to dissect them in order to patent their immortal DNA.

Haven’t we seen this before? I saw it most recently in a regrettable urban fantasy novel from 2014, where the antagonist has super-healing powers and, of course, gets locked up in a secret lab for ghastly torture experiments—just like Wolverine, Luke Cage, and Deadpool, but less interesting, if that’s possible. I’m sure I saw or read an earlier sci-fi story that featured super-healing heroes hunted by evil scientists as a gimmick. It’s so trite, it’s almost a fixture of the genre.

Still, just as we want to forgive Jack Kirby’s gamma rays, Stan Lee’s radioactive spider bites, and the existence of the Incredible Hulk, we could overlook the tired vampire-awakening gimmicks and reheated superhero tropes if The Old Guard had anything unique or interesting to set it apart. It doesn’t.

William Gibson once said that every science fiction story is ultimately about other science fiction stories. And that’s true more often than not, especially in this algorithm-driven era of sequels, reboots, and winning formulas. But The Old Guard is unforgivably formulaic, even if we love Charlize Theron in Monster and Atomic Blonde and Chiwetel Ejiofor in Serenity, everything about the present film is derivative. And its biggest debt may be to the Marvel Punisher series.

The Punisher, Frank Castle—though not strictly a superhero—takes enough abuse that we know he lives beneath the cliché action hero’s lucky star. He can get shot, burned, tortured, hung upside-down in a meat locker, and have his heart broken a hundred times, but he keeps on ticking. He’s a vigilante. His story is “dark.” Yet, in the moral calculus of Hollywood, he’s always right and therefore survives. So it is with Andy and her crew of pseudo-vampire warriors, who get riddled with bullets, stabbed, injected, gassed, and shot point-blank with grenades yet persist the way good action heroes must.

The comic-book-to-movie parallel is telling, but the main difference between the two stories is that The Punisher, as a TV series, can take its time building immersion and suspension of disbelief such that we accept Frank Castle’s survivability. The Old Guard doesn’t have the time and space to gloss over its flaws. The characters are flat. They’re the same characters we saw last season with different haircuts. In fact, it’s like a TV pilot, designed to showcase a team of super-friends while opening potential plot arcs for a 15-episode season.

Still, we want to like the characters merely for their charismatic actors, even the enfant terrible Musk-Shkreli pharma bro, Merrick, played by Harry Melling. Melling’s like a talent forced into the sort of cardboard role written for YA dystopian fantasy or one of the later-day Die Hard films. He rants. He’s pasty. He’s full of himself, can’t fight, doesn’t have a sympathetic bone in his body, and is annoying without seeming real. Unlike Alex in Tau or Dr. Percy in The OA, he doesn’t have a redeeming quality to complicate his perfidy. Like most poorly-written mad doctors, he’s just the last target to be cut down after the boss fight at the end.

As Nile, Kiki Layne does her best to bring the “newly turned vampire, who is unsure of herself” cliché to life. Even if this particular group of immortals doesn’t have fangs or drink blood, her character runs fully on vampire-story logic. Layne is skilled, but an actor shouldn’t have to work beneath that much formula.

Conversely, the most interesting part of the film is the Anne Rice love story between Joe (Marwan Kenzari) and Nicky (Luca Marinelli), evoking Louis and Lestat. Joe and Nicky never get developed enough to be significant—probably a good thing because it could be human enough to take over the entire movie. The moments in which we do get to see their story stand out vividly as if written by someone else. Maybe that’s the case.

Ultimately, this is Andy’s story. But, like every other character and plot point, she suffers from Central Casting-itis. She’s a shallow caricature of both the world-weary soldier and Mister Miyagi to Nile’s Daniel-san. While that could potentially be an interesting mix, the writers give her little worthwhile characterization. What Tanith Lee did brilliantly in her short story, “Winter Flowers,” working through the drawbacks to being an immortal soldier forced to get by in the world, The Old Guard merely assumes by giving Andy nothing more than a bad attitude and some cynical asides.

Between identically choreographed throwdowns, she gets some morose lines about how she doesn’t believe in god and thinks the world is unfixable. And that’s it for her character development. The rest is karate, angled action-hero close-ups, and Theron looking serious as she stares into the middle distance. Like Melling, she’s far too good for her role, which defaults to the Linda Hamilton-esque “pissed-off female commando with a heart of gold.”

The story never improves, complicates, or redeems itself. It’s not, strictly speaking, a movie about human beings; it’s about types we’ve seen a hundred times before. Movies like Interview with the Vampire, The Dark Knight, Daredevil, and even The Punisher transcend genre, making us care about the characters because they are imminently human and we see ourselves in them. By contrast, The Old Guard moves its characters around, has them doing backflips and shouting, without any of relatable or meaningful.

It hands its actors precious little and proceeds in a straight, predictable line from inciting incident to the inevitable “up ending” designed to establish a sequel. At times, The Old Guard feels the way a player piano sounds—like someone inserted a punch-card down at the studio and the Rayovac Scriptwriter 8000 spit out a movie. In his 2011 review of Battle: Los Angeles, Roger Ebert said “If you attend this crap with friends who admire it, tactfully inform them they are idiots.” That seems about right.