Beavis and Butt-Head and the myth of linear progress. 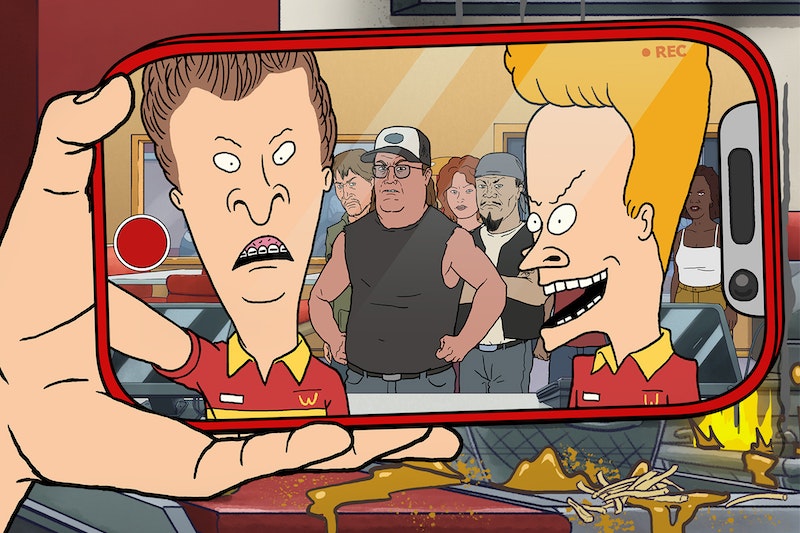 An insidious online trend has emerged in the last decade that can only be called “the kids are alright” discourse: the condescending way that older Millennials and Gen-Xers write and post about Zoomers, their alleged resilience in the face of impending global catastrophe, and their supposedly more enlightened views. From a quick search on Twitter, recent examples of kids being alright include kids organizing a school wide walkout over the Don’t Say Gay bill, kids wearing masks on trains, kids not having kids, kids voting for the Labour Party, and kids organizing a union at Chipotle. It’s not that any of these things are bad. It’s that Zoomers are not a monolith, and citing these as examples of the kids being alright is just as stupid as citing school shootings or other isolated incidents of random violence among teenagers as evidence of the kids not being alright.

Besides how transparently patronizing it is, this generalization overestimates the selfless altruism of most Zoomers. As podcaster (and Zoomer) Caleb Pitts wryly notes, “Alexandria Ocasio-Cortez will give these speeches on how the next generation is going to take care of us and save us and we can depend on them or whatever, and then all these kids are on Twitter right now typing, ‘I love Hitler so much… Hitler was funny AF.’” His point is that “the kids are alright” is a platitude, one that requires not paying too much attention to young people or their habits and instead cherry-picking instances that fit our idealized vision of Zoomers as the generation that’s finally stepping up.

The Paramount+ revival of Mike Judge’s Beavis and Butt-Head arrives just in time, both as a welcome antidote to this “kids are alright” horseshit and a quality series on a service in desperate need of good original programming. The antithesis of proactive do-gooder Zoomers like Greta Thunberg and David Hogg, Beavis and Butt-Head are vessels of pure male adolescent id, with pre-frontal cortexes even less developed than their spindly teenaged muscles, and they fit in perfectly in 2022. If anything, the America of today is even more like the one Judge depicted in the show’s original run: an ugly mess of strip malls, car dealerships, and fast food joints. Judge and his writers understand that today’s Beavises and Butt-Heads got dealt a shittier hand than his generation, and the 24-year ellipsis between the original finale and now—never mind the brief comeback in 2011—is the real substance of the show’s revival.

Format-wise, very little has changed about Beavis and Butt-Head. An episode typically consists of two shorts, interspersed with segments in which the duo provides commentary on videos. Once limited to music videos, these segments now include YouTube tutorials (“Clogged Drain #124”) and TikToks (“how to make prison tattoo ink"). The same way the writers of The Simpsons often bend the rules around Homer’s stupidity to give him a smart or witty line, these segments sometimes elide Beavis and Butt-Head’s adolescent brainlessness and give them smart jokes. (On the mouthless woman in Post Malone’s “Circles”: “He found the one woman who can’t tell him his music sucks.”) But unlike The Simpsons’ continued debasement of Homer, this doesn’t feel like a betrayal of character—what former Simpsons writer Greg Daniels refers to as “eating your seed corn,”—because as anyone who knows a teenager will tell you, they can oscillate between smart and idiotic on a moment-by-moment basis. That’s just Judge being a realist.

In fact, pressed to describe the style behind Judge’s animated works, “realistic” is the word that keeps coming to mind. Unlike popular for-adults animated series like The Simpsons or Family Guy, Judge usually resists the temptation to trespass into the realm of the fantastical, the supernatural, or the impossible. Beavis and Butt-Head and King of the Hill are both premised around the idea that our world is funny enough as is. It doesn’t need talking dogs or aliens.

Maybe that’s the point. People want to believe that “the kids are alright” because they want to believe that progress is linear, that the future will be better than the present. But the last quarter-century has taught us that this isn’t the case. Lots of things have gotten worse: abortion access, mass incarceration, climate change, voting rights, and basic life expectancy, to name just a few. Old Beavis and Butt-Head are this backward progress personified, a reminder that no matter how alright the kids are, shit can always get worse.