Like Martha Stewart, but with booze and panic attacks. 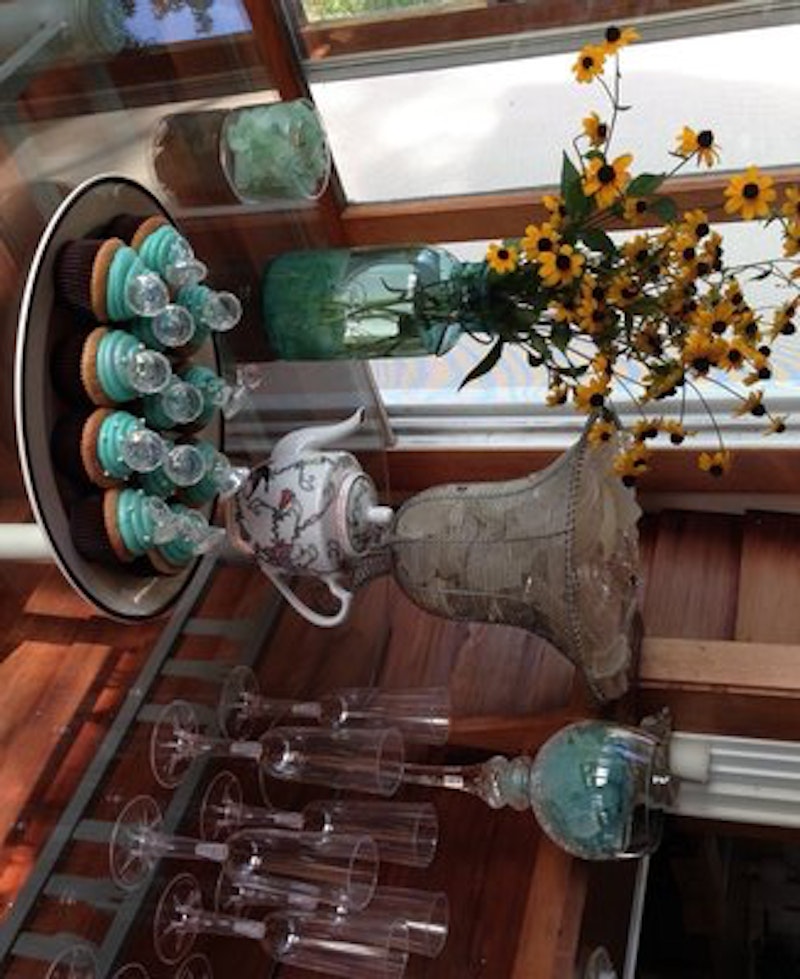 This month marks the one-year anniversary of my membership in the Tilghman Island Book Club. What this means, other than that I have magically avoided dismissal from the quite illustrious group of ladies, is that it was my turn last week to be the hostess of the monthly meeting.

There is no reason why I should’ve been terrified of this event for the nine months leading up to it. At least, no reason on the part of the book club. These women, many of whom are retired, certainly don’t give five minutes of stress when it’s their turn to hostess. They simply choose a menu, get their shit together like normal people, and host the event. For my part, I mentally withered away into a state of near complete padded-room neurosis bordering on psychosis the nearer the event approached.

There are a few reasons I was a train wreck. One: I don’t cook. This doesn’t mean that I don’t know how to make a large number of complicated, delicious things. I mean, I don’t cook anything. My poor kids have been raised on spaghetti, chicken prepared in boring ways, and “make your own dinner night” (see also: pancakes or cereal). Maybe one of them will become a chef out of spite; at least, I can dream.

My writing cottage, constructed in 1959, was built for entertaining. Enormous rooms look out over a 180-degree view of the Chesapeake Bay and the sun gorgeously drops into the water. So I had a cool location to offer, if not gourmet dining. I called the Tilghman Island Country Store (thank God I’m friends with the owners) and they bailed me out with awesome platters featuring local figs from the island.

Here’s the thing. The book club meeting food is traditionally centered around a theme of the book. Last August, the book was 50 Shades of Grey. The hostess labeled her “Submissive Sausages” and “Dominant Dogs” in a delightful menu, finished with cupcakes featuring custom gray icing. Last month the book was April in Paris, and my friend made a full Parisian menu made from scratch, played French music, you name it. It was gorgeous.

Our book this month is Summer at Tiffany’s, a memoir about two women who were the first to work at the 5th Ave. retailer in the 1940s during the war. It was a fantastic book, and possibly one of the first I’ve finished during the course of my year in the book club. I used writing a book as my excuse to never finish the book of the month. My Kindle app is full of ten half-finished book club books.

Since the 50 Shades thing was a year ago, I took the cupcake cue  (i.e. copycatted) and called an amazing bakery in St. Michaels that made Tiffany-blue-iced cupcakes with tiny pearls. I bought plastic cocktail diamond rings for the tops. I put together Tiffany blue sea glass arrangements for the table. Ever attentive to detail, I placed a teapot on the table; the book's author was given one by Tiffany at the end of her summer there. It was a “sell the sizzle not the steak” approach; if everything looked pretty, no one would notice I hadn’t actually made a single thing.

The ladies took pity on me. One brought over a box of neatly wrapped wine glasses—I didn’t have any. The women came bearing gifts of salad, dips, fruit and wine (”The poor dear,” I imagined them saying on the way over, “she just doesn’t have time to cook.”)  Book club membership is exclusive; I don’t want to get thrown out.

Everything turned out fine, even the perfect sunset, and I worried for nothing. I should’ve simply remembered the nickname of this book club: “Reading Between the Wines.” When one of the women wryly observed upon seeing the fabulous food spread: “Maybe we should all learn how to not cook,” I laughed along with everyone else, even though they may have been laughing at me, not with me.