The beauty of the resolving harmonic at BronyCon. 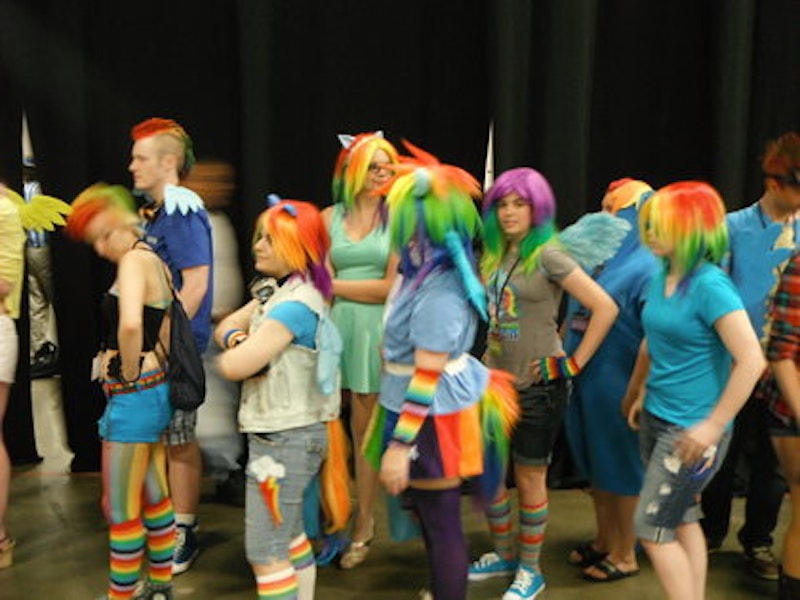 There’s one group of people left in the world that is widely considered subhuman—pedophiles. A very high percentage of people think they should be killed or tortured—no questions asked. Anyone suspected or accused of child abuse or unfortunate perversions is pretty much fucked for life. No wonder the Bronies—adolescent and adult enthusiasts of the My Little Pony: Friendship is Magic universe—are such an easy target. Your first thought upon discovering Bronies was probably along the lines of “Man, how fucking weird.” The misconception is that all Bronies are hot for the ponies and masturbate furiously to episodes of a show made for little girls all night stimming their brains out. No, these are cloppers, aka the real fucking weirdos in the Brony universe.

Baltimore hosted fifth official meeting of Bronies a couple of weeks ago and the City Paper had a nice piece about it from the bowels of the Convention Center and extensive quotes from various Bronies themselves. I’ve decided I need to stop typing the word Brony because it’s driving me insane. I don’t know why the Friendship is Magic universe is so inspiring. The show seems vapid enough to warrant fair suspicion. The City Paper article paints BronyCon not as a seedy rendezvous between dangerous slimy freaks, but as a meeting of true outcasts, people who, for whatever reason, can’t find anyone to connect with. BronyCon is salvation for the alienated. Let’s also consider that serious pony enthusiasts have probably spent an enormous amount of time alone, browsing the Internet, and jerking off to human porn. The whole thing feels like some sort of reverse 4chan joke, messages like “HAPPY HAPPY IS PONY” and visually orgasmic character designs and costumes that might be the only thing stopping them from taking a long walk off a short dock.

Ultimately I think BronyCon is chill. It’s rare to find a large group event where thousands of people are really in tune with each other, connecting and building emotional shelters from an otherwise hostile world. During the convention I saw numerous people on Facebook—young kids and former teachers—who would consider themselves progressive and tolerant, mocking someone who had their pony doll confiscated by giggling TSA officers at the airport. This needling is mindless and a mental dead-end. When you can establish a perpetually resolving harmonic in the atmosphere at an event between thousands of people, you’ve basically willed magic out of thin air, because that sort of camaraderie and positivity and devotion is nourishing to the soul. Concerts and plays and festivals have long ceased being transcendent and mind-expanding. BronyCon isn’t just a location to get drunk or take drugs at, or bash into people, or try to get laid, or get your ego stroked in an environment of unequal exchange. Forget about the specifics of their fandom, and recognize what a successful communal expression of solidarity they’ve pulled off.