The First Month in the Plague Year

Moose on the loose in the time of corona. 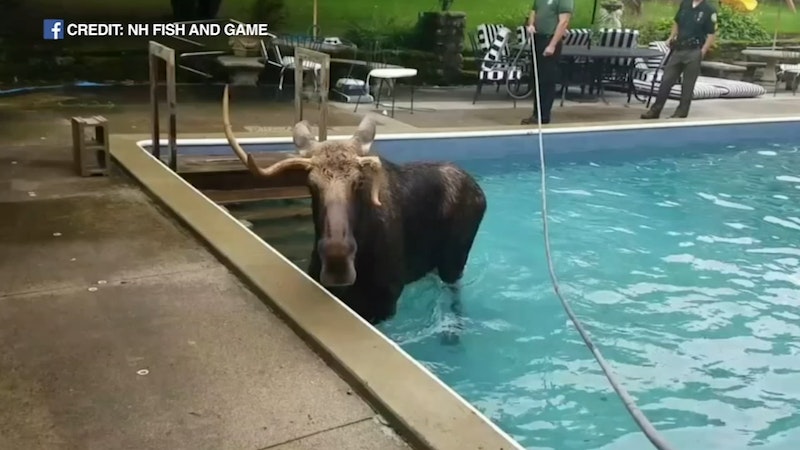 A moose is haunting Antrim. It was seen near my house from a northbound car on Clinton Rd. last week. I know this because, as I was walking south, the passing car reversed, passed me, and stopped about 600 feet ahead. I waved to its driver as she resumed her trip north. She stopped. She was quite excited: she’d seen a moose in the woods. By the time I got to where she’d stopped, it’d moved on.

Its photograph made the front page of The Stone Bridge Post, a local weekly published from Hillsborough. The caption suggests that, unlike most of my neighbors, the animal has no plans to shelter in place.

I faintly recalled a rock ‘n’ roll hit single with a Scottish flavor from 1958, released on Decca: “Hoots Mon,” which has this lyric:

Though a cliché about Scots pronunciation, it’s a reality in Antrim, New Hampshire.

Sheltering in place and social distancing against the coronavirus is fairly easy in rural New Hampshire. My house is a quarter-mile from the nearest neighbor and five miles from downtown Antrim. By March 21, most institutions in Antrim and the surrounding Monadnock region had closed. Town Hall, the public library, and the gym had closed. The Antrim branch of the Bank of New Hampshire transacted business only through its ATM and drive-in window. Even my riding lessons had been cancelled.

I’d been elected to the Antrim Planning Board on March 10, took the oath of office at Town Meeting on March 12, and was notified on Friday the 13th that no town boards would meet before May, if then. The job has no salary. Now it has no duties. Somehow that all balanced out.

So I stay safe, if only because there’s little to do besides reading, writing, emailing friends to be sure they’re well, tending to the cats, and walking. I walk for an hour or more every day, south on Old North Branch Rd. to Clinton Rd., past Old Pound Rd. to Miltimore Rd. to Smith Rd. and back.  There’s little automobile traffic.

I realized a pedestrian might notice many things that might be overlooked from a car. Since the beginning of April, I’ve seen pairs of wild turkeys crossing the road. In warmer weather, flocks of them, young and old, pass through my property, pecking for seeds and insects. A doe and her fawn occasionally stroll through.

My cats recline on the deck and watch.

Along Clinton Rd., Duke, a pit bull; a golden retriever; or a black Labrador often charge to the edges of their properties, barking fiercely to protect their people and their turf, tails wagging to show essential friendliness. I say hello and keep walking.

I noticed some trees posted with NO TRESPASSING signs. This seemed unfriendly and out of character for my neighbors. Then the Monadnock Ledger-Transcript, a biweekly published from Peterborough, published several items about an incident in Francestown, about 15 miles away. On Thursday, March 3, a resident discovered a deer stand on their property. It’d been placed there without the resident’s knowledge.

A deer stand is a hunter’s platform. It may lean against a tree, secured with cords or cables, or be freestanding, with three or four legs. Deer hunters have a better shot at their prey from a stand.

Apparently in response to an inquiry from the Francestown police, the New Hampshire Fish and Game Department opined that, as the resident’s property was not posted, no crime had been committed by the unknown trespassers who’d placed a structure on the resident’s property without permission. Apparently hunters have the right to pursue their prey without regard for unposted property in New Hampshire. I thought of English foxhunters riding roughshod through a farmer’s fields: “The unspeakable in pursuit of the uneatable,” as Oscar Wilde wrote in A Woman of No Importance.

Of course, turkeys are very eatable. But once I learned New Hampshire’s turkey season begins May 1, I bought four signs to post my property against hunting. I don’t consent to hunters’ entry upon my land to slaughter innocent creatures of God.

One of the landmarks along my walk is Old Pound Rd. Quite sensibly, it’s named for the Old Pound. Built in 1818, the remains of “this once critical municipal facility” stand at the southwest corner of Old Pound Rd. and North Holt Hill Rd., about 1000 feet from Clinton Rd. Having detoured to see it, I know the Old Pound’s ruins are about 28 feet square. Despite decades of “frost action and gravity,” its stone walls still stand about four feet high and two feet thick.

In the 19th century, stray farm animals, when found and captured, were brought to the Pound for safekeeping until the animals’ owners came forward to collect them. Perhaps the townspeople were following these Old Testament commands (Deut.22, 1-2 (King James Version):

The Old Pound was a matter of public safety. As local historian Charles Butterfield wrote, a stray animal could “trample gardens, forage crops, break down fences, desecrate the cemetery, and foul or block the roadways…a free-roaming cow was no joke when people lived on what they grew and harvested.”

The Pound Keeper’s fees were 30 cents a day for feeding an animal and three cents a day for his trouble. The animal remained impounded until all fees were paid. If the owner disagreed with the fees, the town’s board of selectmen chose an arbitrator to settle the matter. If no one came forward, the beast was sold, the keeper recovered his fees from the proceeds of sale, and the surplus was deposited in the town treasury.

The last known Pound Keeper, Mr. Morris Woods, held the title for decades. He was locally renowned for driving his Model T truck at little more than a walking pace. He took all morning to travel to and from downtown Antrim. Mr. Butterfield gently wondered whether Mr. Woods would have been fast enough to catch a pig.

The first creature I saw on my property after moving here in March 2016 was a beaver, slowly moving toward the wetlands, its tail occasionally flapping. Since then, ducks and other waterfowl cruise the pond during the summertime. Herons gracefully alight on the pond and as gracefully take flight, weaving between the trees.

Twice, stray hounds climbed to the door and persistently sought entry to the house. Wrestling with a very big, friendly, wriggly dog that wants to only come in so he can lick you to death is a challenge. Happily, a call to the Antrim Police Department brought the kindly and very strong Officer John Giffin to the door. He befriended each animal and persuaded it into his patrol car. The APD quickly found their owners, each of whom telephoned their thanks, one of whom brought jars of homemade jam.

Some bears passed by my pond in early April. I know this because I found about a dozen piles of scat along the shore. They probably drank, relieved themselves, and moved on. This was over the weekend: on the following Monday, it snowed heavily, allowing me to put off picking up the scat for garden manure until the snow had melted. I used a manure rake and a bucket: learning to ride and to clean up after horses has taught me about shoveling… stuff.

Just south of Old North Branch Rd.’s intersection with Clinton Rd. is Meetinghouse Hill Rd., which the town abandoned over half a century ago. Although it appears on the town map, it’s little more than a narrow depression between the trees. Apparently popular with the riders of All-Terrain Vehicles (ATV) and Off Highway Terrain Vehicles (OHTV), it’s so deeply rutted that passage is nearly impossible even for a pedestrian.

I’d walked about a quarter-mile up the remains of Meetinghouse Hill Rd. before giving up and turning back. As I reached Clinton Rd., I heard a raven’s harsh croak and then saw him aloft, wings flapping to rise further into the sky. All this recalled a passage from C.J. Stone’s The Trials of Arthur:

The raven is old, old. As old as time. As old as the mountains. As old as the trees. It has seen many things. It has observed the works of nature and of men. It has watched with an indifferent eye as dynasties have come and gone, as buildings were raised and then crumbled, as the works of men shone and then decayed. It has seen the motorways cutting swatches through the landscape like thin grey ribbons, and it has known that these things too would fall into disrepair and ruin. All things come from nature. All things return to nature. This the raven knows.