On short-lived UK variety show Revolver, which ran for one glorious season of new wave, punk, and disco. 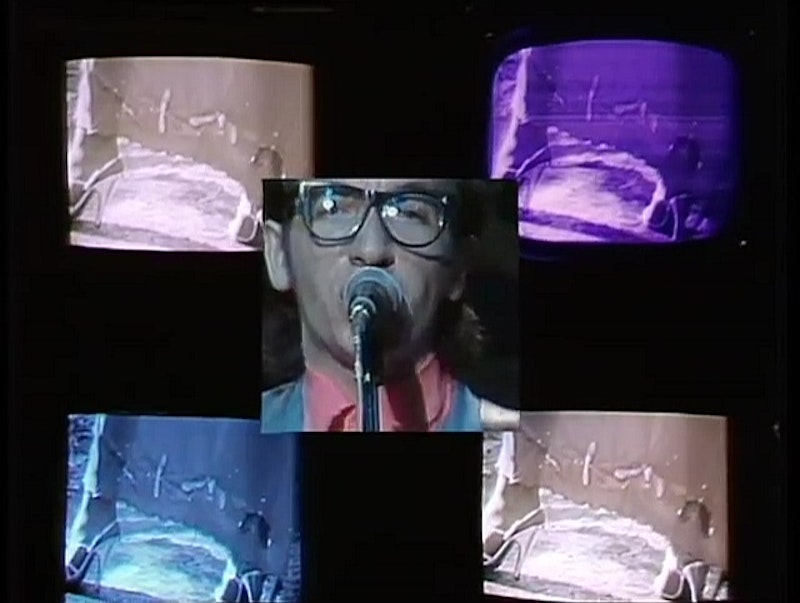 Mainstream TV series that focus on music are usually saccharine variety shows or attempts at hipness pandering to those who worship “the next big thing.” Community access channels, cable/satellite networks, public TV, and amateur/low budget video content from a wide variety of outlets have provided great alternatives to predictable music fare. Van Oekel’s Discohoek, Glenn O‘Brien’s TV Party, and Dim Dam Dom broke down the conceptual parameters defining the audiences, performers, and hosts featured on conventional music shows. As weird and unpredictable as all of these programs could be, when it comes to sheer subversion and originality none of them can hold a candle to Revolver.

Record producer Mickie Most became famous for his 1960s work with British pop acts and the innovative 1970s recordings he released for artists on his own RAK label. He was also the creator and producer of Revolver. The show’s genesis came after Most saw an interview with Top Of The Pops producer Robin Nash who bragged that parents and kids could enjoy watching TOTP as a family. Most pitched the idea of creating the polar opposite, a dramatic bit of chaos that would stir things up and stimulate debate just like the new punk ruckus that was making headlines. The UK Midlands’ ATV network took the bait and production for Revolver began at a sound stage in Birmingham early in 1978. ATV brass viewed the new show as a risky experiment so it was given an obscure late night slot once it started airing a few months later.

Comedy genius Peter Cook was the star of Revolver and two other non-music performers co-starred: a hype man named Chris Hill, who took the role of “King Of The Kidz” a la a younger/louder/scruffier version of Dick Clark, and radio DJ Les Ross (of Radio Tees and BBC Birmingham) who ran an on-camera hamburger stand while sharing rock trivia in a segment called “The Revolver Reviver.” The show centers on a washed-up Midlands ballroom barely clinging on by putting on new wave concerts. Cook’s character is the ballroom manager who appears Big Brother-like on a giant screen television hovering above all the action, an angry ghost of the venue’s faded Big Band past. On each episode the surly manager presents the show dressed in a tuxedo, chain-smoking, and scowling from his dilapidated office surrounded by liquor bottles and an overflowing ashtray, all of which were emblematic of recession era Britain’s troubled state. Cook also comments at the opening and conclusion of each music act’s performance by insulting the artists. The audience reacts to Cook’s wisecracks with a barrage of heckles, boos, and crude chants.

Though Revolver only ran for one season the lineup of acts it showcased set a new standard for diversity in UK music television while also providing a pitch-perfect soundtrack for the culture clash of the 40-year-old Cook and the predominantly young audience. Through a gauze of disorienting visual effects Kate Bush, Steel Pulse, The Buzzcocks, The Rezillos, Matumbi, X-Ray Spex, Elvis Costello, Lindisfarne, Bonnie Tyler, XTC, David Coverdale & Whitesnake, disco superstars Heatwave, a bunch of punk era one-hit wonders and obscuros all graced the Revolver stage and incurred the wraith of Cook as a throng of sweaty pogo dancing punks and other ecstatic gyrators functioned as the script-less mutation of a Greek chorus.

On one episode there’s a rare moment when the ballroom manager’s ridicule briefly interrupts a live music sequence. The Tom Robinson Band appeared, performing their famous pride anthem “Glad To Be Gay,” and midway through the camera cuts to Cook gasping and cocking an eyebrow, a gesture that reflected the same conservative shock and derision that was to inspire proto-Brexiters to rally around Margaret Thatcher. There are other pregnant moments like these, some obvious, some subtle, but all marked with director Chris Tookey’s poetic sensibility. Revolver’s volatile mix of outrageous music, political upheaval, and satire was electrified by Tookey’s manipulation of theater, sound, and state of the art video technology.

In the 1980s MTV would bring complex ideas like this to the mainstream, but 1978 was just a few years too soon for the mass market to stomach something like Revolver, especially when its TV pop competitors were happy to deliver watered-down presentations of the era’s challenging artists. Decline Of Western Civilization and Urgh! A Music War may be the ultimate US punk docs, but Revolver is the definitive snapshot of UK punk culture and the milieu that gave birth to it.