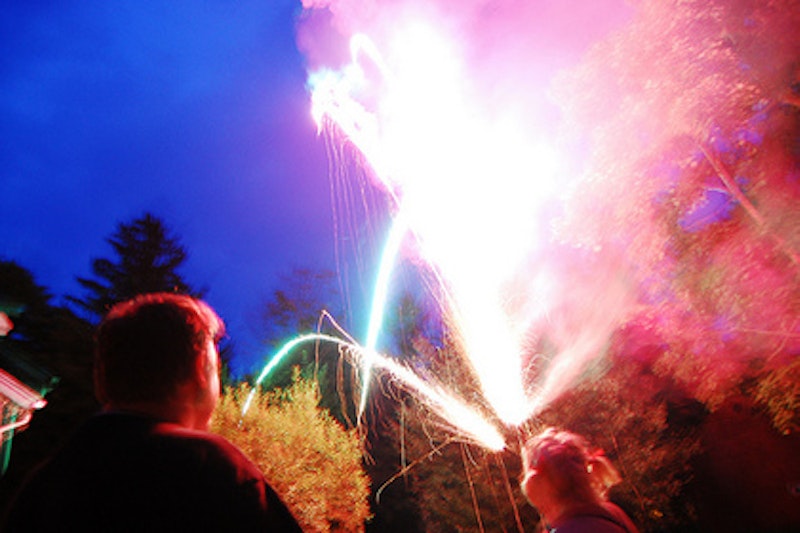 On the playground, if a child's parents had any personality quirks or unusual hobbies, it was usually grounds for merciless teasing. I can remember a friend of mine whose mother raced horse-and-carriages and was mocked for three consecutive grades.

These days, I'm happy when talking to someone whose parents weren't pharmacists or accountants. Anything to extend the conversation beyond the usual pleasantries. A horse-and-buggy racing mom would be worth at least five minutes of genuine interest, an easy four minutes and 50 seconds more than your typical doctor mom or lawyer dad.

On the other hand, a conversation about the Casey family could last all evening. For 60 years, my family has owned and operated Jim Casey's Fireworks on Rosewood Dr. and Kilborn in Columbia, SC, down the street from Hardee’s ("Yes, ma'am, if you've gone to Midlands Tech, you've gone too far"). I have talked to people on the floor of Madison Square Garden in New York and at the Green Door lounge in Hollywood who have been to and fondly remember my family's store.

Having grown up sacrificing all of my Fourths of July and New Year's Eves to fireworks, I have a few memories. I started work as a bagger—stuffing bottle rockets with their long, pink stems and fragile rolling tanks into paper bags until they would tear at the seams—at eight years old. I've been writing this article ever since.

I've worked with people named Crazy Mike, Crazy Ben, Tony (and, later, after he got fat, Fat Tony), DJ Met, Rosie, Dad (or "Your Father", as the other employees would call him), Sonny, Fuller, and Jarmin Thomas.

I've received possibly the most casual bit of fortune telling in my life as I was pricing some Ground Bloom Flowers ($.30 or six for $1.49). An employee not much older than I am now said, "It kind of sucks after you graduate high school. But then you get a job and you can start buying stuff. It gets better then."

I remember all of the milestones as I worked my way up, from not being allowed to work on the Fourth of July and having to sit in the office next to bagging and stocking shelves, to finally being able to use a box cutter and a cash register; from being out on the floor and selling hundreds of dollars of fireworks to where I am now, able to sit back and take it all in as a working visitor.

The worst I've ever felt was after I started actually selling—you know, starting covertly with a, "Can I help you find anything?" and hopefully ending with a $300 purchase. Looking back, I must have inspired an odd combination of pity and trust in my customers, being a bit young, perhaps, yet a member of the Casey family nonetheless.

I'll never forget the family of four whom I greeted, convinced and cajoled into buying the most expensive fireworks assortment in the store. When I went behind the counter to give them a total, I had to watch the mother sigh to the husband, "We could have bought a new washing machine for $300," as their young children, dirty from playing outside, looked up at their parents, mentally preparing themselves for a divorce. I was 13 years old.

Every year, old men, sweating in the air conditioning, would approach the counter: "I knew your granddaddy."

And then the stories would pour out: how my grandfather helped them out of a bind, or campaigned for them during their failed attempt at public office, or even just showed them a fat smile and offered them a discount on a Grand Finale Assortment.

There were bad stories too, of course. The Jack Casey who would demand to speak with a governor because the poor governor made the mistake of endorsing the wrong successor. The Jack Casey who you could hear straight across the parking lot of that den of sin on Rosewood Dr., usually yelling at my father. Hell, the Jack Casey who would even build a den of sin south of the Mason-Dixon; the owner and proprietor of a red-light bar, video poker casino, internet cafe, voting machine distributor and fireworks store, all sharing that same cracked parking lot (because who wants to walk far when boozing and gambling and looking at pornography while blowing things up and voting, among other sins).

But my brother and I came after the yelling (mostly) and the other sins were overlooked easily enough after a trip to Best Buy.

Yessir, we were born after the yelling. When my brother and I were coming up, my daddy and his daddy weren't talking much at all. Half a decade ago, my father struck out on his own, taking the Casey name and buying four garden sheds out of which he hoped to make a firework fortune of his own. “Jim Casey's Fireworks” became “Casey's Fun Fireworks” and my brother and I became its first employees. We were gone from the legitimacy of the 60 years of business, of the air conditioning and the South's Largest Selection. We were building countertops for the garden sheds out of plywood and rusty shelves found in a K-Mart Dumpster. We felt like pioneers, hitching our covered wagons up to gas station parking lots off of I-20 and converting them into firework stands.

Then “Casey's Fun Fireworks” became “Casey's Fun Fundraisers” as my dad began listening to self-help tapes in his den, trying to unlock his inner millionaire, trying to keep that magic Fourth of July crowd around a little longer. He dreamt of school bands dropping their magazine subscription fundraisers to go door to door with firework coupons.

He convinced the only Buddhists in Columbia, SC to work his stands in exchange for a donation at the end of the season. For a couple of years, we sold fireworks alongside a monk from Tibet. Within a year, the Dutch Fork High School Marching Band was unenthusiastically selling firework coupons in the Food Lion parking lot in Irmo. Soon enough, high school clubs and groups would be unenthusiastically doing the same across the state.

But it wasn't working. My dad spent two months working and the rest of the year scheming. Four shacks became two and then just one. The owners of the land my dad rented grew wise and set up firecracker shacks of their own.

My dad, however, grew quiet. Now it was us who weren't talking much at all. I would visit to find him on borrowed land around the corner from his one remaining stand, loading up finished firework assortments into three grounded tractor trailer compartments, preparing for the next season, the fundraiser that was just around the corner.

And then my grandfather died and everything changed.

Suddenly, my father and his two sisters started sitting alone when we went to a restaurant to discuss the estate in privacy. Casual conversations would turn without warning into discussions of the estate tax and property values. Before his death, my grandfather gathered a collection of properties and businesses, even outside of the complex on Rosewood. Dividing the estate between the three siblings proved to divide my family instead. It took two years for my dad and two aunts to talk again with any civility.

With time, the heirs to the Casey fortune realized that the best option would be to give in. My aunts recognized that they didn't want to spend their holidays thinking about fireworks. So my dad got his retribution, his chance to prove to his own father that he learned something in his shed with his tapes. This was his first year in over 40 to manage the store without my grandfather or my aunts next door. It was his year to get things wrong; his year to be idealistic and to win. And guess what—he did. 2007 was a record year for Jim Casey's Fireworks.

People ask me all of the time if I'm tired of fireworks. After we're done, after we've turned away the late customers, sent home the security guard and walked to our cars, we take the long drive home down I-20. As we merge onto the freeway, over the pine trees lining the road we can see golden palms with silver tails, blue chrysanthemums, triple-break mortar shells and three-minute fountains—we see fireworks and not just products priced and lined on shelves and we feel useful and satisfied. And even in those long, tired seasons we were working out of the sheds, we would roll the windows down and smile; the better to feel the fireworks exploding around us.